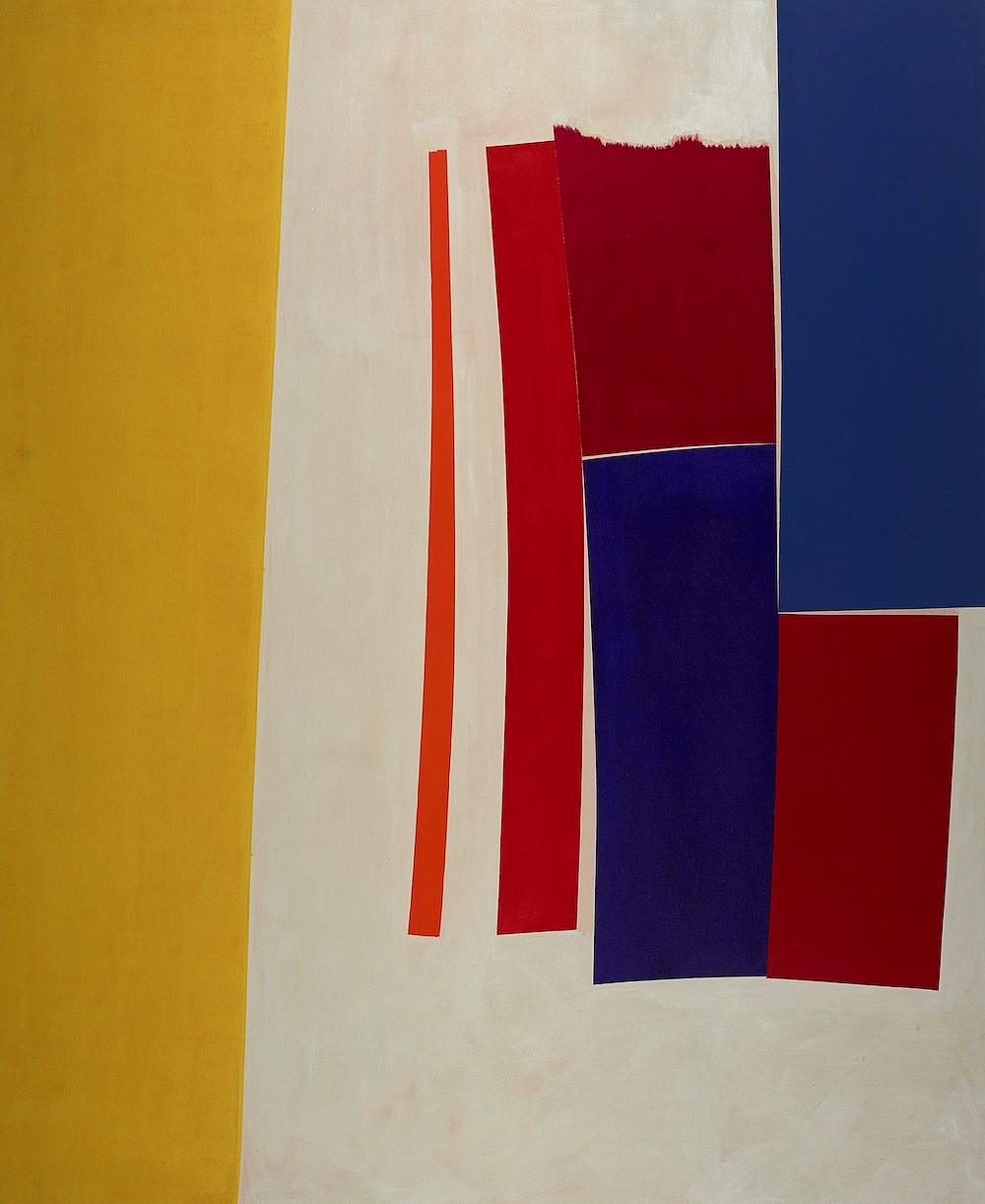 NEW YORK, NEW YORK, April 4, 2019—Berry Campbell Gallery is pleased to announce an exhibition of paintings by the prestigious Canadian Color Field artist, William Perehudoff (1918-2013). William Perehudoff: Architect of Color is a survey spanning the artist's career featuring an early masterpiece, Allegro (AC-67-002), from 1967. Timothy Long, chief curator of Saskatchewan's Norman MacKenzie Art Gallery, recalled that Perehudoff, "invited you to live with colour, he was one of the greatest colourists this province and Canada has produced." As written by The Globe and Mail (Saksatoon) in 2013, Perehudoff was a friend of and is regarded as the heir to Jack Bush, as Canada's most important Color Field painter. [1] The exhibition will open with a reception on Thursday, April 25, 2019 from 6 to 8 pm and continues through May 24, 2019. Karen Wilkin, curator of Perehudoff's traveling museum retrospective, The Optimism of Colour: William Perehudoff, will give a gallery talk on May 8 at 6:45 pm.

Widely considered to be a Canadian Color Field tour de force, William Perehudoff was born in 1918 in Langham, Saskatchewan, a small town located about twenty miles northwest of Saskatoon. He and his three siblings, were raised in a Doukhobor community , assisting with the daily tasks on their parents’ farm. The land remained an integral part of Perehudoff's life as he maintained a focused and balanced ethos in both farming and painting throughout his seven decade long artistic career.

In the 1940s, with scant formal training, he began to show his work in local group exhibitions at the Saskatoon Art Centre (SAC). The Saskatoon Star Phoenix gave him his first taste of press coverage in 1945, reproducing two of his paintings and heralding him as one of the most promising artists featured in the fall exhibition at the SAC. Having developed a keen interest in the art and artists associated with the Mexican mural movement such as Diego Rivera and José Clemente Orozco, he enrolled in the 1948 summer session at the Colorado Springs Fine Art Center where he studied under Jean Charlot, a prominent figure in the movement. Around this time, he met and was employed by one of Saskatoon's main employers of the day, Fred Mendel, an avid art collec tor and the owner of International Packers Ltd. This friendship would prove to be vital to Perehudoff's career. Through Mendel, Perehudoff created large murals of the workers for the cafeteria, which was a morale booster for the processing facility’s employees. Throughout the 1950s, he also created murals for the reception room at International Packers Ltd., several private residences including Mendel's, and businesses throughout Saskatoon. In 1950, he studied with Amédée Ozenfant (who co-founded the Purism Movement with the famed architect Le Corbusier) at the Ozenfant School of Fine Arts in New York. He married Dorothy Knowles, an accomplished ar tist in her own right, in 1951. For their honeymoon, they travelled throughout Europe, absorbing as much art and visual culture as possible. Together, they had three daughters, Rebecca, Catherine, and Carol, and made a life for themselves in Saskatoon. In 1954, he was employed as an artist/designer for Modern Press, a publishing and printing house based in Saskatoon where he worked until 1978, when he retired from the position in order to work on the farm and paint full-time.

Until the mid-1950s, his work was created in a more figurative/realist manner, but still in the realm of abstraction. In 1957 and throughout the next few decades, he participated in his first workshop in Emma Lake, Saskatchewan, which would put the prairi es of Western Canada on the map as an important hub for the visual arts. These workshop attendees included: Will Barnet (1957), Herman Cherry (1961), renowned art critic Clement Greenberg (1962), Kenneth Noland (1963), Jules Olitski (1964), Donald Judd (1968), Friedel Dzubas (1979) and John Elderfield (1979), among many others. In 1988, Perehudoff led the workshop along with Joseph Drapell, Harold Feist, and Douglas Haynes. The workshops of Greenberg and Noland seemed to have the most impact on Perehudoff, and they would maintain a mutual respect for each other throughout the years. Perehudoff would move away from Abstract Expressionism and instead move toward complete non-objective abstraction. It was also during this time that Perehudoff would abandon the thick impasto technique of his earlier abstract work in oils and begin to stain canvas with thinned out acrylic paint, much like Noland, Helen Frankenthaler, Jules Olitski, and fellow Canadian artist Jack Bush. Perehudoff also began to work primarily on the floor. His work from now on would be primarily focused on the primacy of color and form, prerequisites for the Color Field movement.

His work of the 1960s is characterized by explorations in geometric abstraction, by painting long undulating stripes of color, evoking similarities to the paintings of Washington Color School artist Gene Davis, or flat grounds with hard edged yet organic shapes, harkening back to the formative years of Modernist painting. In AC-67-002 (1967), one can see Perehudoff achieving that perfect balance of pure color, form, and space. Throughout the 1960s, his work was included in numerous group exhibitions across Cana da, as well as a solo exhibition at the newly opened Mendel Art Gallery in Saskatoon, Saskatchewan in 1965. It was with these works that Perehudoff began to be recognized as an important contributor to the Color Field movement. Several museums across Canada also began acquiring his works for their respective collections. Examples of this include: Nanai No. 18 (1969), purchased by the MacKenzie Art Gallery, as part of the University of Regina Collection, in Regina, Saskatchewan; Upward Harmony (1969), purchased by Museum London in London, Ontario; and Nanai No. 3 (1969), purchased by the Dalhousie Art Gallery in Halifax, Nova Scotia, all in the same year the paintings were created.

Karen Wilkin wrote the following about Perehudoff's work of the 1970s: “They have evolved from arrangements of brilliant, clearly

defined geometric shapes, to evanescent sheets and bars of pulsating color, to looming walls of inflected, even more subtle hues. They are characterized by what can only be described as a meticulous concern for design – manifest in austere layouts – and an unabashedly romantic quest for the Beautiful – in the form of ravishing color and surfaces.”1 Taking note of the ethereal, stained backgrounds with the hard-edged bars in the foreground, one can see the influence of Noland, as around this time, he was working on his Plaid series of paintings, which uses a similar format. In AC-78-P (1978), however, the hard edge has disappeared, and the bars blend into the background, giving the appearance of watercolor. What is still evident, however, is the allusion to the flat landscape of Perehudoff's revered Saskatchewan prairies. Two prominent series of paintings occurred during this decade are the Amyot and Andanteseries. Both were influenced by the panoramic landscapes by J.M.W. Turner and the color theory of Johann Goethe.

His work was also achieving recognition on an international scale, with solo exhibitions at Noah Goldowsky Gallery (1974, 1976) and Meredith Long Contemporary Gallery (1978, 1980) in New York City; Waddington Galleries (1974, 1976, 1977, 1978, 1979) with locations based in Montreal, Quebec, Toronto, Ontario, and London, England. His work was also included in numerous group exhibitions, such as an exhibition titled 14 Canadians - A Critic's Choice at the Hirshhorn Museum and Sculpture Garden in Washington D.C. in 1977.

During the 1980s, Perehudoff was creating work at a demanding pace, and experimenting with thicker paint and texture. At the time, advancements were being made in the field of acrylic paints as new additives and mediums were produced and sold. Perehudoff embraced a thick gloss gel medium, which allowed him to paint thick organic shapes and add dimensionality back into his work. These works evoked a sense of immediacy and confidence, as once the gel/paint mix went on, there was no way of editing or fixing it. One can see this in works such as AC-82-28 (1982), AC-83-47 (1983), AC-85-094 (1985), and others. In the latter part of the decade, he toned down the use of the gel medium but maintained a compositional balance between the soft background and the thicker organic shapes in the foreground, as evidenced in AC-86-71 (1986). In 1981, a retrospective of his work from the 1970s was organized by the Mendel Art Gallery and toured across Canada, with an accompanying exhibition catalogue written by the curator of the exhibition, Karen Wilkin. In 1987 he was invited to participate in the Triangle Workshop, begun in 1982 by art collector Robert Loder and British sculptor Anthony Caro.2

Throughout the 1990s and 2000s, Perehudoff created work that harkened back to his early abstract paintings of the 1950s and 1960s. At times, recalling Russian Constructivism, hard edged rectangles and bars overlap each other on a monochrome backgrou nd, the compositions enlivened by his contained arrangements of forms and jubilant colors. An example of this is AC-91-35 (1991), where the shapes are bursting out to the outer edge of the canvas. During this time, he received numerous honors including the Cana da 125 Commemorative Medal (1993); the Saskatchewan Order of Merit (1994); was appointed as a Member of the Order of Canada (1999); and was awarded an Honorary Doctor of Laws from the University of Regina (2003). As his health was declining, he could no longer work on the floor on large canvases, and by the mid-2000s, he limited his artistic practice to small works on paper.

In 2010, a major retrospective of his work, The Optimism of Colour: William Perehudoff, was curated by Karen Wilkin and organized by the Mendel Art Gallery. The exhibition travelled throughout Canada for the next two years. Spanning nearly six decades, the exhibition showcased Perehudoff's evolution from early figurative work and landscapes to expansive, luscious abstractions. The catalogue that accompanied the exhibition is the seminal document on the life and work of Perehudoff. In 2013 he passed away at the age of 94, leaving behind a legacy that will influence generations of artists for decades to come.