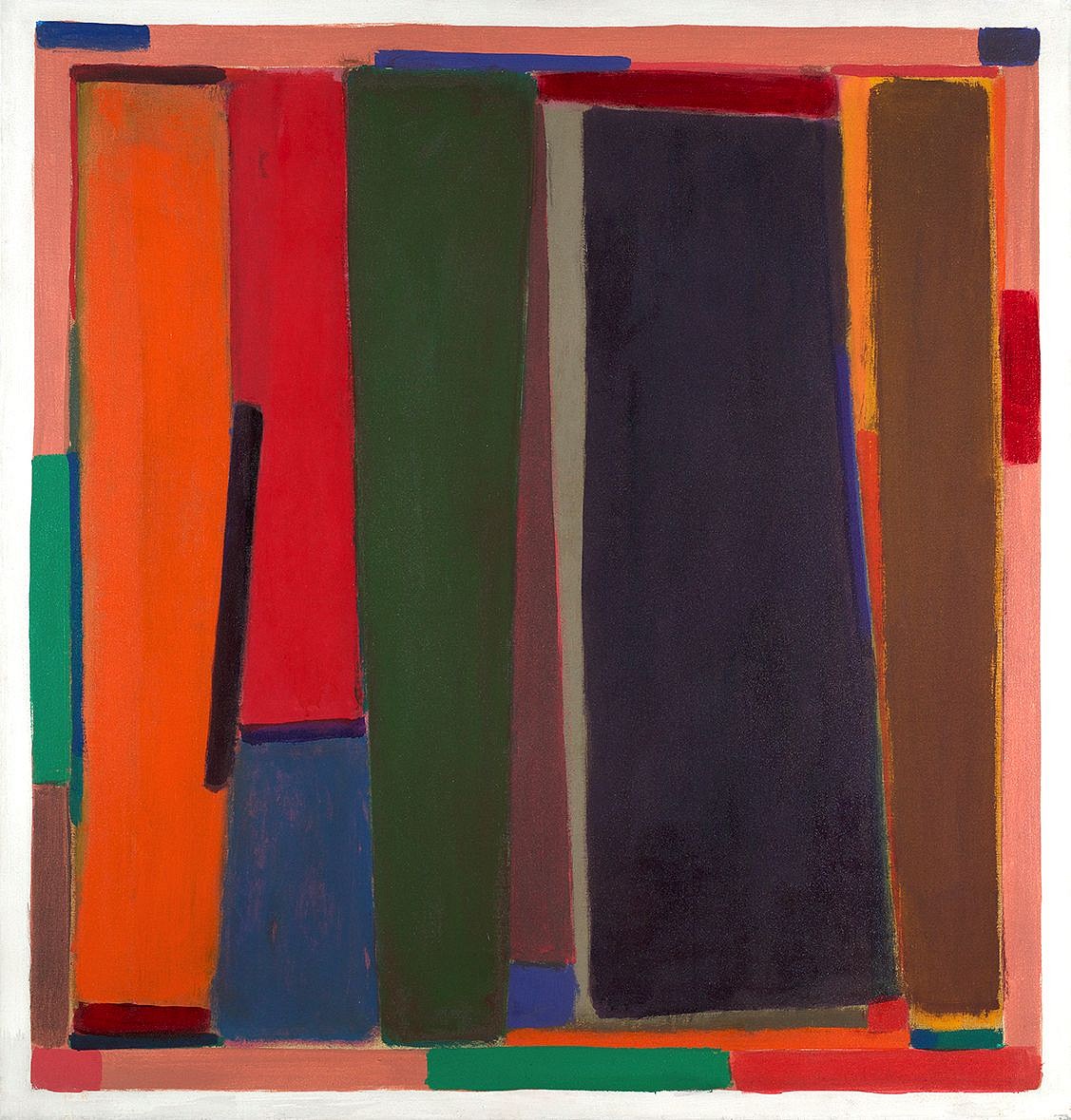 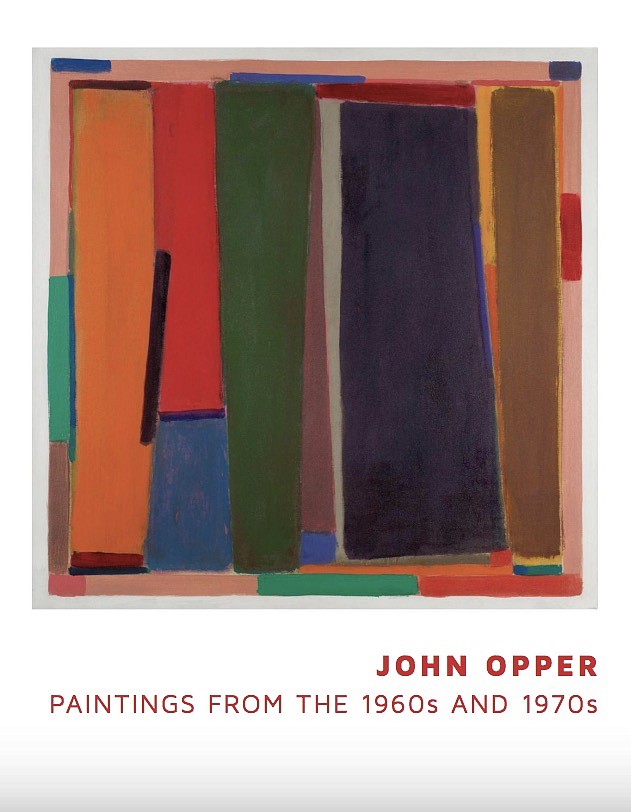 NEW YORK, NEW YORK, January 25, 2018 – Berry Campbell Gallery is pleased to announce a special exhibition of paintings by JOHN OPPER from February 8 through March 10, 2018. The opening reception for “John Opper: Paintings from the 1960s and 1970s” is Thursday, February 8 from 6 to 8 pm.  This is Berry Campbell’s first exhibition of Opper’s work since announcing the representation of his estate a year ago.

Active as a painter for over six decades, John opper was an early member of the New York School. Over the course of his career, he evolved from creating abstract gestural works, in which he drew inspiration from the natural world, to a pure form of abstraction. He stated in 1990: “I orchestrate color, line, and shape. My whole purpose is to produce an aesthetic response.” He held the conviction that “art is its own experience. It bespeaks a sublime relationship between the artist and his work.”1

Born in 1908 in Chicago, Opper moved with his family to Cleveland, Ohio in 1916. In high school, he began studying art as well as taking a correspondence course in commercial art and attending classes at the Cleveland Museum of Art.2 Inspired by the paintings he saw at the Cleveland Museum, including those by the Ashcan School painters George Bellows and Robert Henri, Opper abandoned the idea of becoming a commercial artist. After graduating from high school, he enrolled in the Cleveland School of Art (now Cleveland Institute of Art). The school at that time had a highly traditional curriculum, but Opper was pulled in a modern direction by a visit to the Pittsburgh International Exposition in 1928, where he saw the work of Picasso, Matisse, Braque, and other abstract painters for the first time. Dissatisfied with the Cleveland School of Art, Opper spent a year in Chicago, taking classes at the Art Institute of Chicago. He returned to Cleveland, where he studied at Western Reserve University (now Case Western Reserve), receiving his B.S. in 1931. By that time, the Depression had struck. Remaining in Cleveland, Opper taught afternoon and evening metalworking and sketching classes at the Karamu Settlement House, the oldest African American theater in the United States. In the 1920s into the 1930s, the House, which became known as the Playhouse Settlement, drew actors, dancers, artists, and printmakers.

Following his graduation from Western Reserve, Opper hoped to go to New York. This became possible in 1933. However, having heard that Gloucester, Massachusetts was “a nice spot to paint,” Opper went there first, residing in a fisherman’s house.3 In Gloucester, he showed his work to Hans Hofmann, who was teaching at the school run there by Ernest Thurn. Hofmann encouraged Opper to work “in a more modern vein and start finding what it’s all about.”4 Following this advice, Opper went from Gloucester to New York. There he and another artist from Cleveland, Edward Kaufman, started a mail-order club of American and British prints, which they mostly printed themselves, to distribute to schools and museums. With an office on Fifth Avenue, they made a portfolio of nine artists, including Louis Lozowick, Wanda Gag, and Karl Hofer. Shortly after moving to New York, Opper married his high-school sweetheart Estelle Hausman. By the mid-1930s, he joined the WPA Easel Division. Opper credited the WPA experience with introducing him to new modern ideas. To advance further in this direction, he attended the 57th Street school Hofmann had established after leaving the Art Students League. Looking back at his time at the school, Opper felt that beyond Hofmann’s teaching, most advantageous was his contact with fellow artists, including Byron Browne, Rosalind Bengelsdorf, and George McNeil. At the time, he also met Giorgio Cavallon and the sculptor Wilfrid Zogbaum.

In 1936, Opper was a founding member of the American Abstract Artists, along with Balcomb and Gertrude Greene. The organization was formed to provide an opportunity for artists to show abstract works at a time when there were few other opportunities to do so. Opper had his first solo show in 1937. Held at the Artists’ Gallery in New York, it displayed a “colloquial flavor” and “imaginative color” as noted by a reviewer for Art News. The reviewer described the works on view as suggestive depictions of “East River tugboats, old garages, and scenes around Manhattan.” 7  During his summer in Gloucester in 1933, Opper came to know Milton Avery. Painting in Avery’s informal studio in New York City the following winter, he became acquainted with Adolph Gottlieb and Mark Rothko. Opper participated in a couple of shows during the 1930s of the American Artists Congress Against War and Fascism, whose president was Stuart Davis. About the same period, Opper joined the Artists’ Union and served as the business manager of its publication, Art Front. “With the WPA, you got together whether it was the [Artists’] Union or the [American Artists’] Congress or whether it was a bar…and you talked about art, and heard about important artists, and you began to live art.”6

During World War II, Opper worked for a ship design company, creating drawings for piping systems used for PT boats. In 1945, he left New York for a teaching job at Women’s College (now University of North Carolina, Greensboro). He then taught at the University of Wyoming, followed by the University of Alabama, Tuscaloosa, before returning to New York in 1949, where he taught at Columbia University and completed his doctorate. In the evening, he taught at the Pratt Institute, in the company of several leading New York artists, including Franz Kline and Tony Smith. It was during his years away from New York that Opper began to create purely abstract works. He had been unable to do so earlier because he had been torn “between the needs of the society and the needs of war on the one hand, and . . . what I felt were the aesthetic needs of painting.”7 However, he gradually came to believe that what is essential to art “is that which changes . . . the language and the substance of it.”8 With a wife and two children, Opper again left the city between 1952 and 1957, when he returned the University of North Carolina at Greensboro. Despite his absence from New York City, Opper made frequent trips back, never failing to gather with friends such as Kline, Philip Guston, Grace Hartigan, and Willem de Kooning at the Cedar Bar. In 1955, Opper had a solo exhibition of abstract works at Egan Gallery in New York. In a review in Art News, Parker Tyler referred to Opper as a “substantial member of the New York School” who had exploited “its fusion of free rhythms and hieroglyphics with Cubism’s standard analysis of space and object.”9 By the summer of 1957, Opper was back in New York City, where he joined the faculty of New York University, remaining until he retired in 1974 as professor emeritus. Opper found a large studio in a former YMCA building on the Bowery. He partitioned off the third-floor space into two studios and offered the second space to James Brooks. When Rothko received the Four Seasons commission, Opper suggested he use the empty gym, which he did. When Opper had a heart attack in 1966, he moved one floor down to minimize the flights of stairs rather than give up his studio, which he kept until he died. The illness also made him switch permanently from oil to
acrylic paint.

In 1962 Opper bought a house in Amagansett, Long Island and began construction on a studio. From then on, he painted in both Amagansett and the Bowery studios. Starting in 1988, he spent the winter months in Sarasota, Florida, where he established another studio. Throughout his long career, Opper showed with several well-known New York galleries. In 1959, Eleanor Ward invited him to the Stable Gallery. He left the gallery in 1962, following the advent of Pop Art. Starting in the mid-1960s, Opper was represented by the Grace Borgenicht Gallery. He continued to paint until his death from a heart attack in New York City in 1994.

Opper’s art—gestural painting with thick impasto—changed beginning in the late 1950s, when he began to simplify his color and create works with large interlocking planes. Of his show in 1958 at the Stable Gallery, Dore Ashton observed in the New York Times that Opper “paints large forms that sweep onto the canvas and grip each other near the center. The shapes are on the same plane, movement is not in and out, but is lateral, creating tension along the jagged line where color masses meet . . . Opper’s pictures are about the dramatic interaction of abstract forms; they are felt and moving.”10 Gradually, Opper intentionally denied the texture in his work to allow his forms to exist fully without the distraction of a painterly surface.11 He felt he could create more dramatic intensity with a two-dimensional quality in his art. He thus began to avoid overlapping planes, while painting blocks of color with feathery edges that had echoes of the work of Rothko and Hofmann. Vivian Raynor called the works Opper exhibited at the Stable Gallery in 1962, “handsome objects” that afforded “contemplation of color for its own sake.” 12 During the 1960s, Opper assumed a Color Field sensibility, further controlling the gestural quality of his art and playing colors off each other “with the elegance and panache of a master juggler,” as noted by Hilton Kramer in 1979. 13 In his late career, Opper built on his earlier stylistic modes, creating works with a vibrating quality of controlled movement, featuring verticals that challenge but do not intrude on each other and loose cloud-like shapes that respect the two-dimensional limits of the surface yet have an airy feeling of play.

Opper’s work is in numerous American museum collections, including the Museum of Modern Art, the Whitney Museum of American Art, and the Metropolitan Museum of Art in New York City; the Milwaukee Art Museum, Wisconsin; Cleveland Museum of Art, Ohio; and Smithsonian American Art Museum, Washington, D.C. Among his awards are the John Simon Guggenheim Fellowship, 1969; National Endowment for the Arts Fellowship, 1974; and the American Academy of Arts and Letters, Jimmy Ernst Award, 1993.