Edwin Ruda holds a unique place in the development of abstract art in the late twentieth century.  By contrast with many artists who did not step beyond a stylistic boundary, he consistently and purposefully explored the linkages, incongruities, and connections between minimalism and the modes of geometric and lyrical abstraction.  The result is a body of work characterized by elegant and radiant resolutions of the seemingly contradictory. In 1973, Peter Schjeldahl stated in a New York Times review that the best of Ruda’s paintings attained “a level of practically spiritual elevation.” Schjeldahl went on to state that it was precisely due to this quality that Ruda’s works seemed “out of step with their Soho context,” concluding that they “‘belong’ to no Zeitgeist, only to the art of painting.”  In the early 1960s, Ruda was a leading figure in the Park Place Group, the model for the activist and cooperative galleries that followed, and his art was featured in many of the most significant exhibitions of American abstraction from the 1960s through the 1990s.

Ruda was born in New York City and grew up in the East Bronx.  After graduating from high school, he entered the School of Agriculture at Cornell University.  His studies were interrupted at the end of his sophomore year when he enrolled in the navy during World War II.  In 1945, after serving a three-year tour of duty in the Southwest Pacific, he returned to Cornell on the G.I. Bill, completing his course work in biological sciences and studying figurative drawing.  He received his bachelor’s of science from Cornell in 1947 and subsequently returned to Manhattan, where he enrolled in art classes at The New School for Social Research.  There, Adja Yunkers was among the teachers he found to be the most stimulating.  In 1948, with the continued help of the G.I. Bill, he entered Teachers College, Columbia University, where he received a Master of Arts degree in 1949.  In the three years that followed, he studied at the Escuela de Pintura y Escultura, Instituto National de Bellas Artes in Mexico City.  He then taught painting for one year at the University of Texas, El Paso.  In 1956, he received a Master of Fine Arts degree from the University of Illinois, Champaign-Urbana.  In the three years that followed, he taught painting at the University of Texas, Austin.

On his return to New York City in 1960, Ruda rented a temporary studio at 79 Park Place, which became the home by 1963 for the Park Place Group, consisting of artists from the West and East coasts who, showed their work informally, establishing a spirit of mutual influence.  In addition to Ruda, the artists included were Dean Fleming, Peter Forakis, Robert Grosvenor, Anthony Magar, Mark di Suvero, Tamara Melcher, Forrest Myers, and Leo Valledor.  The Park Place Group shared a passion for large-scale sculptures and paintings, which Ruda—as the spokesman for the group—described as “not illustrations of ideas,” but instead “part of the emotional content of the sixties.”  When the Park Place lease expired in the spring of 1964, several of the artists found backers who helped them establish a new gallery at 542 Broadway, incorporated in 1965 as Park Place, The Gallery of Art Research, Inc.  This name was intended to express the group’s spirit of experimentation and discovery.  Its first director was John Gibson, and its first president was Paula Cooper.  In February of 1967, Ruda and di Suvero were featured in a joint exhibition at the new gallery.

During the 1960s, Ruda was included in many landmark shows, including Systemic Painting, held at the Guggenheim Museum in 1966; the Park Place Gallery Exhibition, held at the Massachusetts Institute of Technology in Cambridge, Massachusetts, in 1968; Cool Art, held at the Aldrich Museum, Ridgefield, Connecticut, in 1968; Two Generations of Color Painting, held at the Institute of Contemporary Art, Philadelphia, in 1970; two Whitney Museum biennials (1969 and 1973); and several others.  From the late 1960s through the mid-1970s, he showed at the new gallery established by Paula Cooper on Prince Street in Soho that was modeled on Park Place.

Committed to abstraction, Ruda evolved in several directions in his art during the 1960s and 1970s.  His first works were soft-edged minimalist abstractions in a lyrical mode that in their ambiguous planes evoked the spirit of impressionism.  By 1962, he had introduced hard-edged shapes into his art, creating arrangements with strong geometric and optical properties. In the next period, he explored ways of reconciling these two forms of abstraction, often finding a transitional place between them.  His approach is demonstrated in his “band” paintings of the late 1960s and early 1970s, in which he blended the systemic and the accidental.  While starting with vertical or horizontal structures, he loosened the flow of his paint and introduced pure and translucent colors that are rarely part of minimalist statements.  He then had to work through the contradictions that resulted without allowing structure or formlessness to dominate, which at times entailed erasures or additions, echoes or accents.  Each work thus became a closed system with its own internal logic. James Gleeson wrote in 1974 review of a show of Ruda’s art at Gallery A, Sydney Australia, that the artist had found the “missing link between minimal art and lyric abstraction.”  Schjeldahl stated in 1973 that Ruda, “a painter of large, complex painterly abstractions,” was “an artist often overlooked in discussions of contemporary painting, but I believe one of the finest in America.”  Schjeldahl further noted:  “There is a wonderful balance of ambiguities in these paintings, between paint perceived as color and paint perceived as physical substance. . . . The unifying ambiguity, so to speak, is between a sense of spatial depths suggested by layered ‘veils’ of color and a sense of surface flatness enforced by the clear evidence, everywhere, of the artist’s hand.”

In the mid-1970s, Ruda also created large shaped paintings, including a series in the form of huge diamonds.  One of these works was described by Holland Cotter in a New York Times review of a 1992 solo show of Ruda’s art as “possessing a gritty radiance.”  Ruda has continued to use abstraction to develop his conceptual and painterly ideas over a long career. 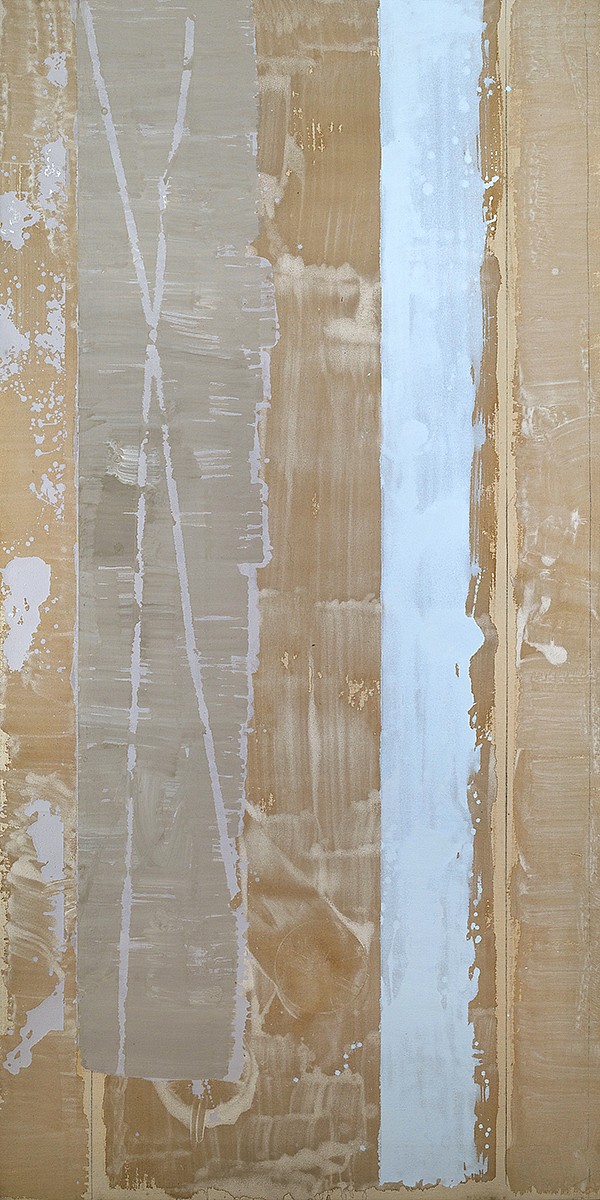 The Frank and Gertrude Kaiser Art Gallery at... 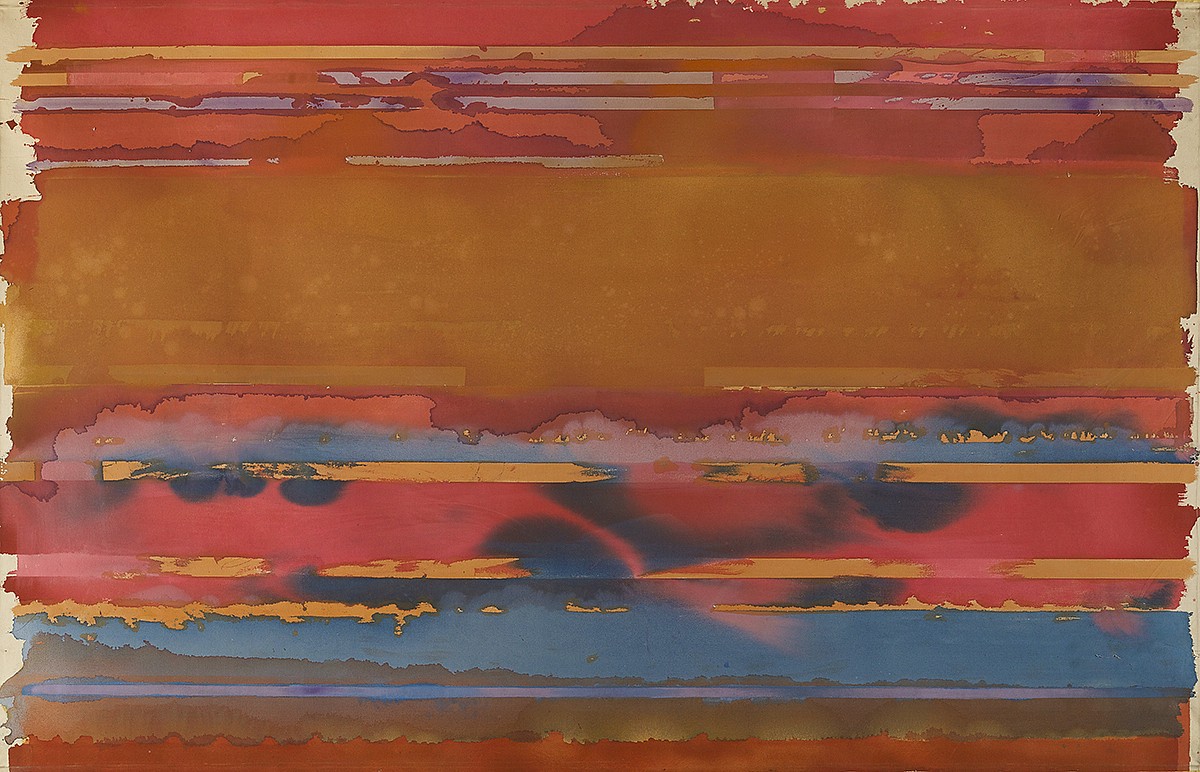