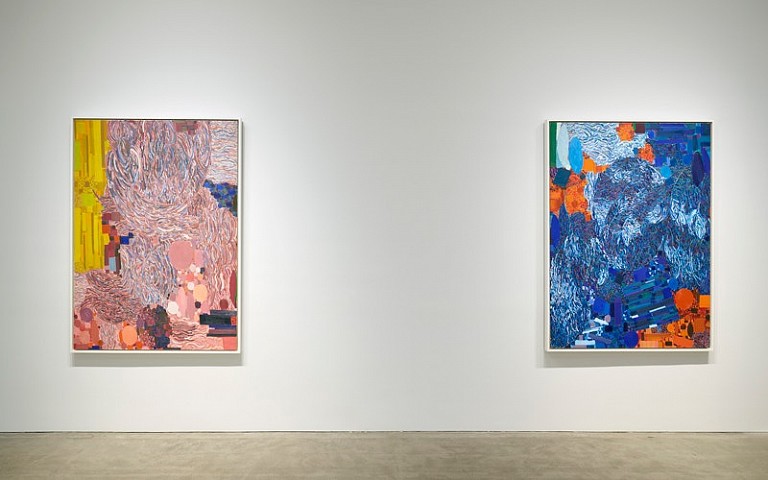 In Lynne Drexler: The First Decade, simultaneously at both Berry Campbell and Mnuchin Galleries, we come across a voracious and novel form of late Abstract Expressionism. It’s a path that runs parallel to color-field painting, and in playing with discreet nodes of color owes as much to Klimt, van Gogh, and Seurat, as it does to Drexler’s mentor and teacher, Hans Hofmann. The paintings in these two exhibitions test out how best to manipulate the viewer’s response to associations of almost-pixelated color units, singular forms which attain a mosaic-like quality: working together but retaining their independence. This causes almost as much visual agita as it creates harmonic compositions. But Drexler enjoys this game, pushing us into musical associations, as with the fiery and seething Gotterdammerung (1959), which displays her obsession with Wagner; or reminding us of the luminaries of late nineteenth/early twentieth century painting. The paintings are slyly referential, and at times almost charts or repositories of leitmotifs, gorgeous but slightly too practiced. It is at the moments when the gestures themselves begin to get out of hand that we begin to really enjoy Drexler’s chaotic energy.

The selection of paintings at Mnuchin Gallery range from 1959 to 1964, and very literally trace the path of an artist growing out of the influence of Hofmann, with whom she had studied in 1956 in New York and Provincetown. In Erratic Water (1963), Untitled (1962-64), and Leaning Trees (1964), impassive squares and rectangles stand guard over miasmatic flows of smaller quadrilaterals. Drexler plays constantly with how to orient her precise strokes: in Erratic Water, long blue, gray, and lilac striations branch and intersect like geologic formations, while in Rosewell (1959-62), the artist gives her lively little forms some breathing room, and they float in an erratic but discernable formation, like a chemistry textbook illustration of the process of diffusion. The thick stratigraphies of color, as well as pointillist pods of flickering dots recall Klimt’s The Park (1910) or Bauerngarten (1907), but Drexler seems to be seeking a controlled chaos, much like Wagner’s swirling string passages connoting the movement of the Rhine or dancing magic fire in his “Ring” Cycle. This she achieves in the pale Untitled (1960), given pride of place in Mnuchin’s rotunda, a breeze of mint green, orange, and burgundy brushstrokes which ebb and flow like a cloud of particles constantly changing size and orientation. In Untitled, Drexler conducts a visual musical passage solely through brushstroke, perhaps thinking, and certainly reminiscent, of Monet’s Les Nymphéas.

Drexler’s innovation in terms of presenting color was quickly recognized by both Hofmann and her other mentor Robert Motherwell: she was steering in a direction that contained the raw emotional energy of action painting but was not following the path of watery skeins of color of her contemporaries like Helen Frankenthaler or bold juxtapositions of form and texture, such as Perle Fine or Willem de Kooning. At Berry Campbell, whose selection of works dates from 1965-1969, Drexler’s fastidious arrangements of strokes or units become much tighter and thicker, and the earlier open fields of color and brushstrokes yield to denser accumulations. These canvasses offer more textural variety; works such as Flecked Sun (1966), Grass Fugue (1966), and Harmonic Sphere (1966), map-like, have distinct zones of more square strokes painted in clear distinction to longer curvy marks. The artist clearly recognizes that certain motifs dominate, but she works hard to balance their presence against that of the other motifs: the feather-like curvy marks do coalesce into wing-like forms (which also look like van Gogh’s cypresses and wheat fields), and these she tries in different colors. Drexler allows these wings to take over the canvas in Harmonic Sphere, the curling wing is pink, in Grass Fugue it is green. In South Water (1965) and Plumed Bloom (1967), and it is in these paintings, and the paintings of 1967-69, that she allows this powerful gesture to grow and destabilize the visual equation of her paintings. In Burst Blue (1969), Towards Twilight (1968), Egg Plume (1967), and Untitled (1968-69), Drexler becomes enchanted by her writhing plumes of diaphanous color. These formations are far from benign or sedate; they expand and weave their way across the canvas: it’s as if Vincent’s cypresses have decided to barrel diagonally upwards across the canvas in Egg Plume, checked only by a resolute red dot in the upper left corner. Towards Twilight is the most unsettling and intriguing of Drexler’s paintings in both exhibitions: a vibrating, revolving mass of beiges, pinks, and blues—overall, fleshy in color—expands outwards, swallowing masses of ellipses and circles, and pushing flattened yellow rectangles to the borders of the picture plane. The brooding AbEx postwar angst has been concentrated into this scintillating mass, and it is both devouring and shoving aside the artist’s selection of considered Modernist signifiers. It is exciting to see a relatively short period in an artist’s life covered so thoroughly at both galleries, and to watch her tweak and experiment up to a point of jarring and poignant originality.