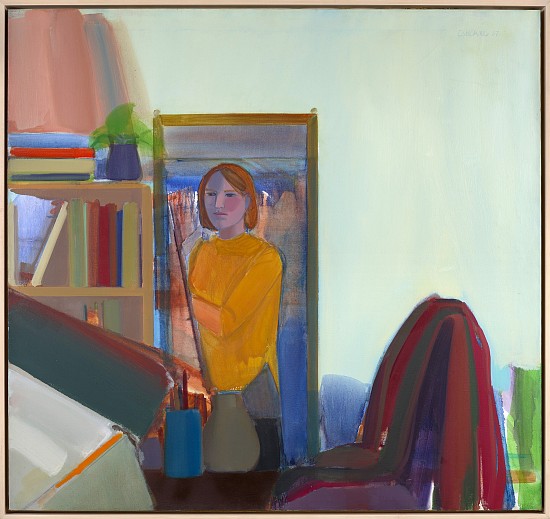 ABOUT THE ARTIST
A ghostly figure looking out from a doorway; actual windshield wipers positioned over a painted car window; vividly clothed, sensuous figures posed in sparse rooms; land and sky betraying no brushstrokes, horizons to infinity; supernaturally precise still lifes that stop time; charged explorations of the painter’s studio, the past asserting itself in mirrors; vivid bands of light and color echoing the sounds of the cosmos. Few artists of Elizabeth Osborne’s generation have explored as wide a range of subject matter. Driven by curiosity and an unwillingness to repeat herself, Osborne has frequently shifted working methods to support new directions. Born and raised in Philadelphia, Osborne has been at the center of its art world, a critical figure integral to the city’s cultural identity as an educator and as an innovator in her studio. Her art bears the impact of her time in Philadelphia but transcends place, running with multiple streams of modernism and post-war painting.

Osborne had a progressive Quaker education at Friends Central School near the original site of the Barnes Foundation. Two mentors in her childhood, Louis W. Flaccus and Hobson Pittman, supported her early drive and talent in art. Flaccus, a family friend, was a professor of Philosophy and amateur painter; Pittman was a professional artist who taught at the Pennsylvania Academy of the Fine Arts (PAFA) and at Friends Central. Both men encouraged Osborne to defy societal expectations of young women and to trust her passion and instincts for a career in art. Osborne took advantage of everything that Philadelphia offered a young artist. She visited galleries, museums, and took additional classes outside of her school week at the Philadelphia Museum College (now University of the Arts) with painter Neil Welliver. Surviving work from this period shows that Osborne was quick to understand observational drawing, grasping the nuances of form and the emotional capacity of line and color.

These relationships grounded Osborne as she endured a series of traumatic losses during childhood and into her teens. Her father Charles died from leukemia in 1945. Three years later her mother, Virginia, killed herself by overdosing on pills. Osborne and her siblings, including an older brother and a twin sister, were left to be raised by Virginia’s brother and wife. In 1954 while painting a portrait of her grandfather, he revealed that her biological father was the architect, Paul Philippe Cret (1876-1945), who had died the same year as Charles Osborne, further illuminating the impact of loss on her mother. In 1955 her twin sister Anne killed herself while Osborne was traveling in France on a fellowship. These tragedies have resurfaced in her work throughout her career in unexpected ways – as figures who seem to be mirages, objects intimately observed but separated from one another as though unknowable. Osborne has reflected on the impact of grief on her work and how it affected her figure paintings:

"My work really was affected for a while by the loss of loved ones, of the presence of death…In the figurative paintings there’s probably this connection with longing and missing my sister in the solitary figures and the darkness with figures emerging and receding…Losing people is imprinted…there is a natural impulse to have these people back. They disappear from your sight, your life but they reappear when you try to go to sleep at night."[1]

By 1954 Osborne had entered PAFA while simultaneously working towards a BFA at the University of Pennsylvania. At the time, PAFA was a mixture of progressive instructors and conservative academics resistant to many modernist developments of the previous half century. Founded in 1805 and the first museum and art school in the United States, it was an immersive experience for art students, offering a rich permanent collection and annual exhibitions of contemporary American art. Among her instructors were experimental figure painter Ben Kamihira, abstract artist Jimmy Leuders, realists Francis Speight and Walter Stuempfig, and traditional modernist Franklin Watkins. Osborne’s training encompassed working from life models, drawing from casts and still life set ups, and other rigorous beaux-arts-based pedagogy. She maintains that her most fruitful relationships and education came through the camaraderie between friends and fellow students including Raymond Saunders. Continue Reading