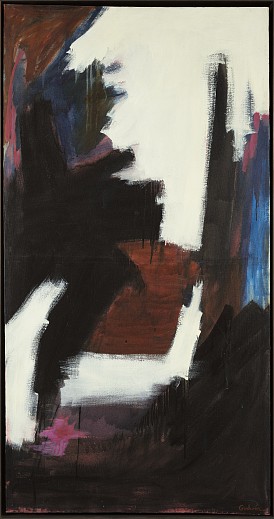 Part of the Abstract Expressionist movement, Godwin was challenged by the male-dominated art world in the ‘50s

“Images generated by the female experience can be a powerful and creative expression for all humanity.”

Gender gap
That was painter Judith Godwin talking at Northern Michigan University in 1978. She died on May 29, 2021, at age 91. But it’s unclear why she believed her images were confined to the female experience because they so plainly transcend gender.

I also recognize elements of Robert Motherwell’s pictures in hers.

Lessons learned
The connection between Godwin’s Abstract Expressionism and that of her male colleagues may stem from having studied with the same teachers. Including Hans Hoffman, of whom she said, “I think the main thing with Hofmann was that I felt completely free to do whatever I wanted to do.”

And what she wanted to do was be bold. According to the Johnson Collection Gallery, which carries some of her work, Hoffman’s use of bold colors “significantly influenced Godwin’s future work."

The same point was made by the Johnson Collection, saying that because the Abstract Expressionist movement was so full of men, not many women got known.

Come to think of it, even when Lee Krasner became known, and she may have benefited from being Jackson Pollock’s wife.

Female experience
Female artists in other art movements besides Abstract Expressionism faced the same predicament. Underscoring the point that the art world was a men’s club, Sotheby’s just reported its most successful sale in an all-female art auction was a portrait by Francois Gilot of her daughter - one of two children she had with Pablo Picasso.

One can’t help wondering if the record sale had something to do with that relationship.

Lisa Stevens, head of Sotheby’s modern art online, seemed to confirm the point by telling ARTnews, “It isn’t commonly known that Gilot’s commitment to art was present long before her relationship with Pablo Picasso, and she was sadly often left in his shadow.”

Weaker sex?
So, it’s not surprising that Berry Campbell Gallery would place Godwin in a “contingency of strong female practitioners.” There wouldn’t be a need to invoke the words “strong female” unless being a female artist suggested weakness.

Godwin admitted that she felt pressured to create powerful, turbulent work to compete with her male counterparts for critical and commercial attention. The Johnson Collection quotes her saying, “If you were a [woman] painter in that period, you felt you had to paint as strongly, as violently as the men did.”