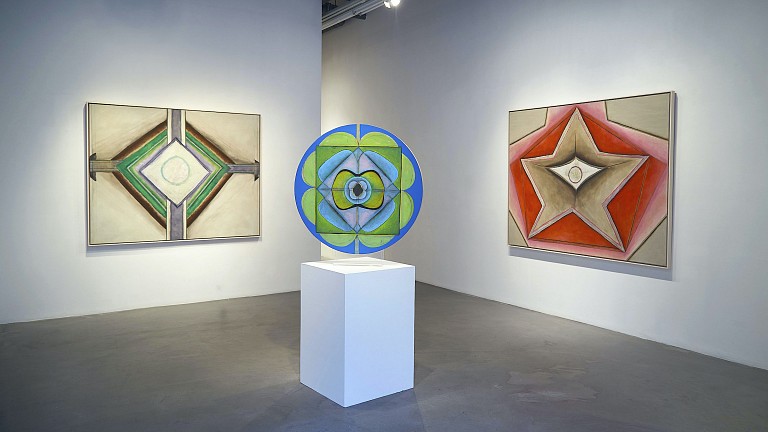 I learned of the artist Ida Kohlmeyer (1912-97) primarily as a teacher at Newcomb College, the women’s college at Tulane University in New Orleans, from one of her former students, the Post-Minimalist shape-shifter Lynda Benglis. In the 1970s Kohlmeyer developed a style of multihued pictographs, usually organized on a grid. Pleasantly derivative, they suggested well-behaved Joan Snyder paintings. Kohlmeyer seemed to be a journeyman artist who kept up with the latest trends; had a good color sense and a solid touch; but who never put the pedal to the metal to find out what she could do that no other artist could.
Then the announcement for “Cloistered,” the first Kohlmeyer exhibition at Berry Campbell, arrived by email and I stood corrected. Pedal and metal had made contact. Kohlmeyer had done something that was way above her usual average, something simple and intense. In 1968 and ’69, she produced a group of symmetrical geometric abstract paintings in a rich, winy palette. Hand drawn, their harsh shapes begin at the center of the painting’s edges, widening into diamond or chevron shapes at the center. They suggest the plans for ancient forts, and appropriately so. Cocooned at the center of this symmetry was softer symbol of vulnerability: a simple circle, or occasionally an ellipse, as in the yolk yellow one that, like the air bubble in a carpenter’s level, forms the living heart of the remarkable “Cloistered,” protected by concentric bands of deep red.


Almost never exhibited, these works may be derivative but they are gloriously so. They’re so full of the work of disparate artists that they become overarching, laying waste to the term. The gallery’s press material invites comparison with the work of Georgia O’Keeffe and Agnes Pelton. That’s fine, but more contemporary references come to mind, like Jasper Johns’s and Kenneth Noland’s targets, Billy Al Bengston’s centered irises and sundry Frank Stella paintings. Then Kohlmeyer’s efforts turn away from the men to evoke the early work of Eva Hesse and Agnes Martin, Judy Chicago’s built-up dinner plates, the dark reliefs of Lee Bontecou. The list could go on.
One of my favorites is an untitled work that features a plushy five-point star in shades of light brown enclosed in a red pentagon that fades to pink. These paintings stunningly sum up a moment when Minimalism was giving way to or being complicated by something more emotionally challenging and implicitly feminine and feminist. They could hang in any museum. There is much more to know about Kohlmeyer, a late-blooming artist who had a successful career even without her best work — the “Cloistered” paintings — whose possibilities she unfortunately chose not to explore. ROBERTA SMITH