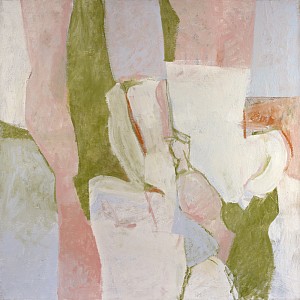 A surprising number of 20th-century female artists, if they spent any time in New York, had something to do with the Art Students League, a coeducational institution since its founding in 1875. Ahead of next year’s centennial of the 19th Amendment, which gave women the right to vote, the sculptor Will Corwin put together “Postwar Women,” an impeccable show of work by alumnae, former models and other connections of the league, in its Phyllis Harriman Mason gallery. Mr. Corwin narrowed his focus to women who were active from 1945 to 1965 but he still came up with a profusion of names and styles: more than 40 artists making everything from social documentary to winsome portraiture to the most stereotypically muscular sort of Abstract Expressionism.

A brace of powerful lithographs by Elizabeth Catlett, a totemic bronze by Louise Bourgeois and Joyce Pensato’s wonderfully spooky charcoal drawing of Mickey Mouse sit happily alongside work by less famous names: The red and green church in Blanche Lazzell’s woodcut print “The Little Church” has a strangely childlike innocence, and Lenita Manry’s delicate but committed oil-on-canvas view of the city from her studio window made me think of the New York School painter Jane Freilicher. The overall effect is to make the ongoing process of rethinking the art-historical canon to remedy discriminatory exclusions feel as exciting as a treasure hunt.