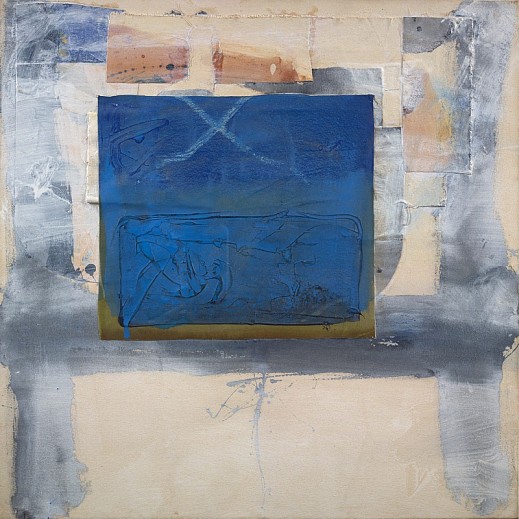 Sag Harbor has known 92-year-old artist Frank Wimberley since the 1960s — but in New York, it’s time for a re-introduction, according to Berry Campbell Gallery, who will open a survey of the artist’s dynamic, multi-layered abstract paintings with a reception on Thursday, May 30, from 6 to 8 p.m.

“Over the course of a career that has lasted more than 50 years, Frank Wimberley has felt abstract painting to be a continuous adventure,” a press release said. “The artist is a well-known presence in the art scene on the East End of Long Island and an important figure in African-American art since the 1960s.”

Growing up in the New Jersey suburbs, Wimberley was drawn to art and music — interests supported by his mother, a ceramicist and pianist who involved him in her work, and his father, who gifted him a trumpet.

In 1945, after serving in the Army, he attended Howard University, where he studied painting with three of the most influential African-American artists of the mid-20thcentury — James Amos Porter, James Lesesne Wells and Loïs Mailou Jones. There, he also immersed himself in jazz, listening to it and playing it himself, leading to long friendships with the likes of Miles Davis, Ron Carter and Wayne Shorter.

But after two years — and with the basics under his belt — Wimberley left, ready to teach himself. At first, he practiced ceramics, following in his mother’s footsteps and influenced by the tactile and sculptural pottery of Peter Voulkos.

“However, on discovering that Voulkos was also a painter, Wimberley realized that he did not need to be committed to one medium, and instead ‘could do several,’” a press release said. “In the 1950s, while living in Queens with his wife, Juanita, and son, Walden, he worked the night shift at a local post office. This freed him to paint and take care of Walden during the day, while Juanita was at work. The post office provided him ‘with money—and time,’ which he felt was ‘the most important thing.’”

In 1960, the Wimberley family began vacationing in Sag Harbor and, four years later, bought land and designed a modernist, sky-lit home — drawn to the long legacy of artists’ communities on the East End, as well as Sag Harbor’s history as a place where African-Americans had lived continuously since the 1600s.

In 1969, when few African-American artists were able to exhibit their work, Wimberley was included in a group exhibition at CW Post College — his first public display of many more to come. Ten years and an exhaustive list of exhibitions later, he participated in a group show of Eastville artists at Guild Hall, alongside the likes of Alvin Loving, Robert Freeman, Nanette Carter and Gaye Ellington, Duke Ellington’s granddaughter.

“Texture played an especially important role in Wimberley’s art beginning in the 1970s,” the release said. “At the time, he was creating collages consisting of pieces of scrap cardboard, paper, cloth, and metal that he used to explore contours and spatial arrangements. In the next phase of his art, he incorporated three-dimensional found objects into his work. By the late 1980s, his emphasis was on paintings, created with a sculptural sensibility. He applied his pigments in a thick and pliant manner, using both scratching and raking methods to provide substance.”

From the 1990s into the 2010s, Wimberley built on his previous art, while setting out in new directions. His work of the early 1990s revealed his commanding use of a wide range of materials, including brushes made of steel wire, spatulas, and pumice. By the decade’s end, he often simplified his compositions, focusing on a particular inquiry that he pursued to a point of resolution.

At the turn of the new century, Wimberley was receiving widespread recognition. In 1997, he had solo shows at the Islip Art Museum, Long Island, and June Kelly Gallery in New York. In 1998, he received the Pollock-Krasner Fellowship for the year, and in 2010, he would be named the winner of the Guild Hall Artist Members Exhibition, selected by Ben Gennochio, former art critic for the New York Times.

“What has always excited him is to take the theme or feeling from the very first stroke he lays down and follow it to its particular conclusion, ‘very much like creating the controlled accident,’” the release said. “His improvisational method is akin to jazz, an important part of his life and a theme in his art. Despite the spontaneity of his process, Wimberley makes each decision deliberately, respectful of what emerges and where it is going; he enjoys the surprise of arriving at definitions that seem to come to life on their own.”

The show will remain on view through July 3. For more information, visit berrycampbell.com.