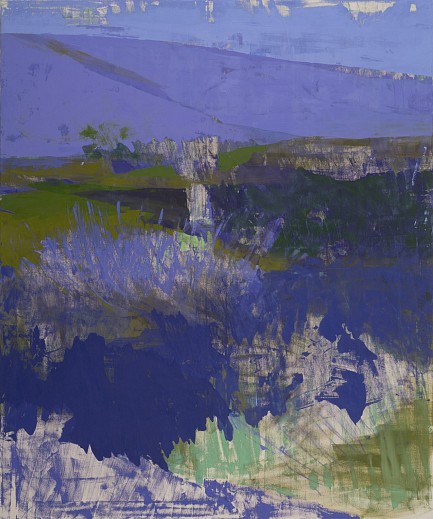 Neon pinks, lush greens, vibrant purples and a variety of orange hues enliven vibrant abstract compositions with direct ties to nature. These colorful paintings that seem to capture spontaneous moments are part of a new body of work by artist Eric Dever. Surprised? Hold on because there's more.

In a groundbreaking departure, Eric Dever has let go of his controlled use of limited color palettes and tight grids to embrace the entire color spectrum and loose shapes that seem to capture a joy that's both quiet and profound. Historically, Dever has slowly been opening his art to color after a period of four years where he worked in white only (Zinc and Titanium White). During this time, Dever discovered the possibilities of the spectrum of white as well as the textural interactions of raw linen, canvas and burlap with paint.

In 2010, Dever added black and worked only in black and white for two years. In 2012, he added red to the pair and explored the possibilities of color for four years. This new body of paintings represent his first foray into vibrant color in over a decade.

In another major departure, Dever moved from a tight adherence to the grid—especially in his use of mini-rectangular fields of color set in methodical lines—to channel nature in loose paintings set on rectangular canvases.

The switch of canvas dimensions—along with the color of flowers sprouting in his Water Mill garden—inspired Dever to move in a new direction, according to the artist.

Eric Dever's new body of work debuts in a solo show at Berry Campbell in Chelsea this month. “Painting in a House Made of Air” is on view from January 10 to February 9, 2019. Berry Campbell is located at 530 West 24th Street, Ground Floor, New York, NY 10011.

Eric Dever is based in Water Mill, NY in The Hamptons. When not working in his studio,he teaches art at the Parrish Art Museum. As an educator, he inaugurated the art workshops at Maddoo Conservancy in Sagaponack, NY in 2012 at the invitation of artist and Maddoo founder Robert Dash.

Click here to view art in the exhibition “Painting in a House Made of Air.”