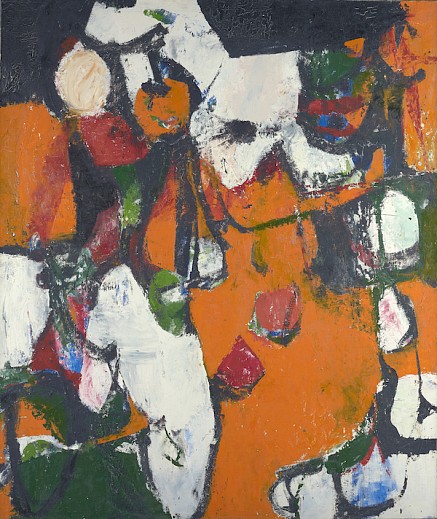 Gallery Setareh in Düsseldorf: Only a few were taken in by the Club of the male men

As the Royal Academy in London two years ago, the “New York School” prepared a great appearance, were intended for the painter’s inner self-supporting roles only very sparingly. After all, the Denver Art Museum in Texas, had 2016, also, the artists of the Abstract expressionism devoted to an Overview of the Setareh now has the düsseldorf gallery, are excited to a Review: The thirteen artists in the exhibition – the majority in New York, but also in Europe – quite an expressive abstraction of the day, but found only in a few cases, inclusion in the exclusive circles and Clubs of men. The painters were in turn represented in a large number of, of all things, of the two avant-garde gallery owners, namely the Peggy Guggenheim and Betty Parsons.

The name of the in Dusseldorf, gathered painters, Helen frankenthaler and Lee Krasner, anything other than common. And all of you would like to see more than two to three images from the fifties and sixties. Especially from the in 1923 in Kapuvár, born a Hungarian, Judit Reigl and the energetic Gera Celts images from the series “Ecriture en mass”: instead of appearing to be a cross-format Reigl distributed with the spatula bizarre Islands of cabbage Raven black oil Paint on snow white and leaves behind the traces of the Malakts on the canvas – powerful, these contrasts. The Surrealist André Breton was fond of Reigls way to paint and organized in the fifties, the first exhibitions for the artist, who now lives in France.

Michael Corinne West (1908-1991) had studied in the thirties at the private school of Hans Hofmann in New York and held it later is advisable, also a male first name, not to purchase, that you clearly feminine Name in the career in the way. With a stirring Gesture and material rich Color subsidence is responding, the Chicago-born artist on the existence of fears of the atomic age. Grace Hartigan takes part in 1950 as one of the few painters in the exhibition “Twelve Americans” at the Museum of Modern Art in New York. In the same year, the critic Clement Greenberg and art historian Meyer Shapiro you are looking for “New Talent” at the Samuel Kootz Gallery. At Setareh their semi-figural image of “St. Serapion (after Zurbaran) is issued,” according to the Spanish Baroque painter, and so, from the year 1952. Hartigans in this country, nor present as the rather dapper-looking Works are in museums and exhibitions, high-quality painting of a Charlotte Park.

Or “art Informel” of 1928 in New York, born in Amaranth, honor hold, bent on an abstraction “in constant movement”: “dancing, vibrating, gyrating, shimmering, stretching, and jumping” should appear in the colored textures in your images according to your own Express. You already have a “Self Portrait Abstract,” by Mary Abbott sold. As one of the few artists to have been Abbott, as next to her, Perle Fine, and Yvonne Thomas, of painters dominated by “The Club”. With Brush strokes in different shades of red and collaged fields of the 1921 recorded-born in New York, today in the Hamptons, the living painter himself as a “Self Portrait Abstract” in a picture from 1957.

Whether it is the düsseldorf-based selection will be given, with the cliché of the “AbEx” as a masculine style really “clean up”, as it was declared the gallery in the catalogue, it must still be doubted. But it is possible that some of the painters, the discoveries yet to be made, to appear soon in their own exhibitions in Germany. (Up to 23. February. The prices range from 19,000 to 1.26 million euros.)