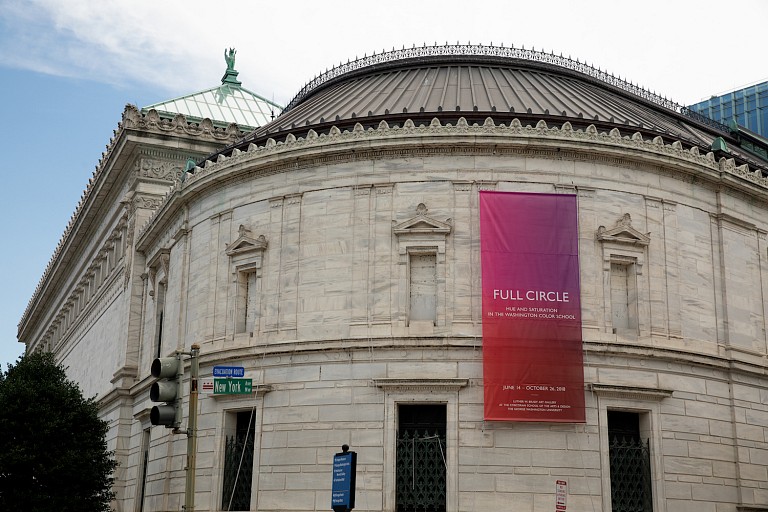 The Washington Color School encompasses the DC artists in the 1950s and 1960s who focused on Color Field painting, a style of abstract painting that typically includes blocks of solid color. Many of these artists were associated with what is now known as George Washington University’s Corcoran School of the Arts & Design. The Luther W. Brady Art Gallery’s inaugural exhibition in the Corcoran’s Flagg Building celebrates the history of both the Washington Color School and the Corcoran.

The exhibit, Full Circle: Hue and Saturation in the Washington Color School, is a nod to the artists’ return to the institution where they learned to paint. “This homecoming is making me teary already,” said Ann Purcell, an artist who taught painting, drawing and art history at the Corcoran when it was independent and whose work is showcased in the exhibition. Carol Brown Goldberg, an alumna of the Corcoran whose work is also featured in Full Circle, described studying at the Corcoran as “a state of envelopment” since students learned directly from artists like Purcell.

The Flagg Building has its own story. It was designed in the beaux-arts style by the American architect Ernest Flagg, who studied at the École des Beaux-Arts in Paris and is one of the most renowned practitioners of this style in the U.S. The Flagg has been open since 1897. It became a historic landmark in 1964 and was listed on the National Register of Historic Places in 1971. Much of its interior was also deemed historic by the DC Historic Preservation Review Board in 2015.

The Corcoran is a relatively new addition to George Washington University, having just joined GW’s Columbian College of Arts & Sciences in 2014. Prior to that, it was an independent art school — and one of the first private museums in the United States. Artists began giving lessons there in the 1870s. In 1878, William Wilson Corcoran, a DC banker, philanthropist and art collector, donated money to establish a school that officially opened on January 6, 1890. The institution was named in his honor. Its next transformation came in 1999, when it was renamed The Corcoran College of Art and Design, as it developed a reputation as the standout four-year art and design program in DC.

Joining GW marked a dramatic new chapter for the Corcoran as a part of a major university. It is also a welcome opportunity for students and staff in all areas of the university to gain exposure to art. A gallery monitor on a recent day at the Brady Gallery, for example, was an engineering student.

The Brady Gallery is an education art gallery that has been a part of GW since 2001. Moving this important gallery — which handles the university’s permanent collection — to the Flagg Building is a key step in unifying the Corcoran and George Washington.