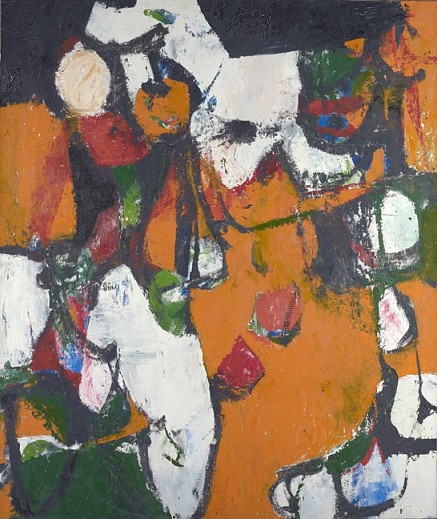 With so much going on during Armory Week in Manhattan, you can be forgiven for not getting to the Charlotte Park survey on view at the Berry Campbell gallery in Chelsea, but it's really your loss.

Sure, the art fairs dotting the city as far north as the Park Avenue Armory and as far south as Tribeca had their moments. But just as the female artists of the past and present shined in those settings, Ms. Park's paintings from the years 1950 to 1985, work relatively unknown to the wider art market, demonstrate an artist at top form.

Ms. Park died in 2010 and her husband, James Brooks, died in 1992, but both artists, who lived in Springs, are receiving renewed interest as mid-20th-century art and design's wide popularity continues unabated.

At times when abstraction was often hard-edged and doctrinaire, her softer shapes and forms suggest elements of the natural world. She moved, seemingly effortlessly, from brooding thickets of black-and-white compositions into lighter and brighter color-saturated canvases and works on paper. Deep, dark winter becomes spring and then summer quite soon after the couple's move to the South Fork in 1949.

She kept the curvaceous forms in her compositions for most of her life. Even a digression in the 1970s into Mondrianesque grids might be invaded by some tentative orbs in a small sector, off to the side, like marginalia or a brief reminder to herself not to let go of them. By 1976, in a piece called "Chicory," the lines, which were always drawn with a free hand and not at all precise, transform into undulations. The tidier squares and rectangles slide and spread as if breaking loose of their bindings.

Whether light as a feather or as menacing as a northeaster sky, the art looks fresh and lively. This is not only because it presents the work of an artist on her best days, but because her style and viewpoint were her own, not merely feminized versions of the work of her male colleagues.

The show will be up through Saturday.