The absence of most in-person art fairs in the past year and a half appears to be making the white-hot art market even hotter. That’s the takeaway from the opening day of the pop-up Intersect Aspen art fair, which takes place in a city overrun with billionaires. The fair, which features 30 galleries from 26 cities and was described by one fairgoer as “tiny but exquisite,” attracted a bevy of collectors, including Andrea and John Stark, Janna Bullock, and heiress Elizabeth Esteve.

Sales were fast and furious, organizers said. Galerie Gmurzynska, whose director Isabelle Bscher made a concerted effort not to presell works (as galleries often do at major fairs), sold a Joan Miró painting, Tête (1979), for $2 million in the first hour of the opening day. Two days later, Gmurzynska reported selling another work, a small Picasso titled Compotier avec raisin (Pigeons) (1927) for over $1.5 million.

“Where better to be than Aspen?” asked Christine Berry of New York’s Berry Campbell Gallery. “We have a renewed appreciation for being at an art fair in person.”

Seattle dealer Greg Kucera reported selling work by Chris Engman for $5,000 and by Humaira Abid for $8,000. The gallery is also showing two new works by Deborah Butterfield that were made specifically for Intersect Aspen, and are on view for the first time.

“The fair opened on Sunday morning at 10 with a bang,” New York dealer Nancy Hoffman said. “Starting with energy is key to the success of the event, and this is a success. This is our first in-person fair since the pandemic, and it has been great so far, positive on all levels. The right size, the right place, the right audience, the right fair director and organization.”

Hoffman said responses have been strong to the gallery’s booth theme of wild flowers, which is inspired by Aspen’s floral landscape. With prices for works ranging from $1,800 to $75,000, she said the gallery sold works priced from $5,000 to $30,000.

Half Gallery sold out a booth of works by Hiejin Yoo (prices ranged from $12,000 to $20,000), Young Lim Lee (priced around $8,000), and Umar Rashid (priced around $25,000). Director Erin Goldberger said she was using the opportunity to meet new clients, see old clients, and talk about the artists on view with visitors.

Goldberger said many of the collectors at the fair have not been back to New York since the start of COVID, so this is the first time many are seeing artworks from galleries they work with in person. Emmanuel Perrotin sold works by Daniel Arsham from two different series, including one featured prominently in the booth, Quartz Eroded Basketball Hoop (2021), which sold for a price in the range of $60,000 to $90,000.

Edward Cella Art and Architecture gallery sold a painting by Wosene Worke Kosrof, House Full of Words (2014), for $46,000, with strong interest from buyers in additional works. “I’m pleasantly surprised by the quality and intelligence of the collectors, who are geographically dispersed throughout the country,” said gallery owner Edward Cella. 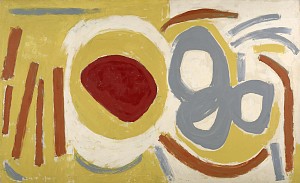 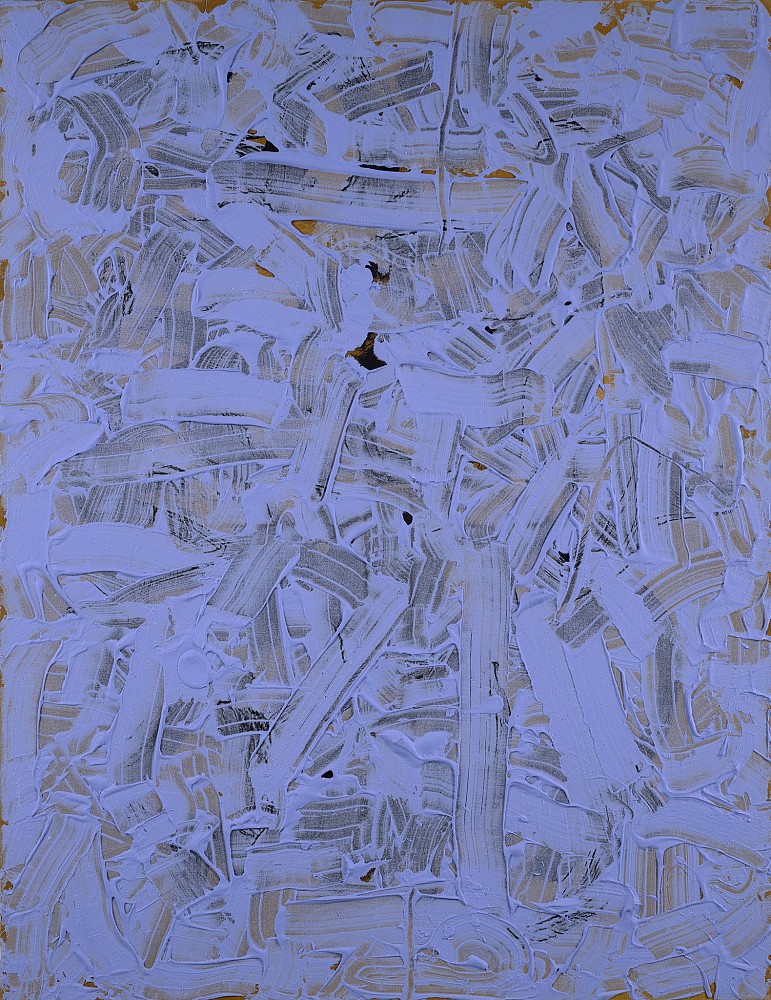 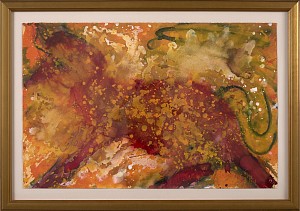 Last Wednesday, a mixed-media collage by the late Abstract Expressionist artist Grace Hartigan sold for $75,000 at a Christie’s online auction, achieving five times its high estimate and breaking the auction record for works on paper by the artist. Hartigan, who was lauded as “the most celebrated of the young American women painters” by Life magazine in 1958, has seen a steady surge in demand for her trailblazing work in recent years. This is partly due to a growing wave of market interest in female Abstract Expressionists from collectors looking to correct their omission from art history. 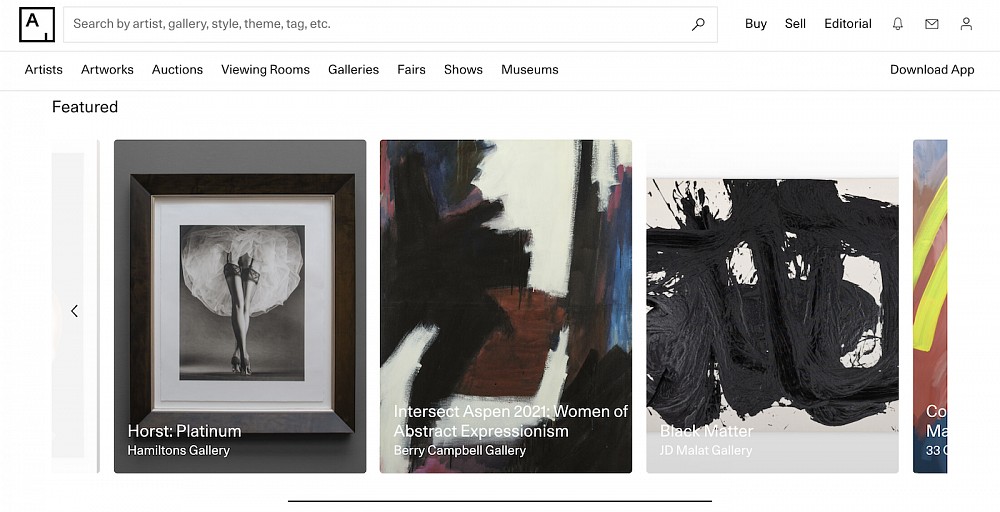 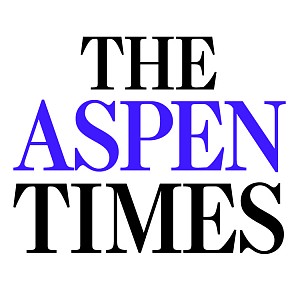 The Aspen Times: What to See at Intersect Aspen

The annual contemporary art fair in the Aspen Ice Garden is back for an in-person experience Aug. 1-5. With a new owner and new producer, it’ll look different than it did pre-pandemic, when it was known as ArtAspen, but the new Intersect Aspen is still offering a curated selection of international galleries showing and selling postwar art and blue-chip artists.

The new Intersect Aspen is hosting 30 exhibitors from 26 cities, filling the ice rink with a sampling of works from some of the leading contemporary art galleries and also a glimpse of the insane heights of the pandemic’s commercial art market. Intersect Art and Design acquired ArtAspen in April 2020 and hosted a virtual version of the fair last summer.

The new version of the fair hits as the international art world descends on the resort for the Aspen Art Museum’s annual ArtCrush gala, which has its main events running Aug. 4-6, and as a bumper crop of leading multi-national galleries have opened seasonal pop-ups in Aspen. 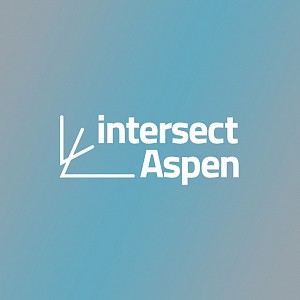 Hoffman spoke heartily about the exhibitions that will be on view, ­especially when discussing TOTAH’s interesting presentation of Alex Sewell’s paintings in conversation with Saul Steinberg’s drawings to explore the concept of text through art, Berry Campbell Gallery’s group exhibition featuring underrepresented women artists of the Postwar movement and a monumental Clyfford Still oil painting, “PH-568, 1965,” which will be featured in Sélavy by Di Donna’s art and design exhibition. 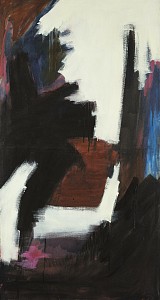 Ida Kohlmeyer on view at New Orleans Museum of Art

These symbols [in Ida Kohlmeyer’s work] exist as a kind of pictographic code, inviting us to try to decipher their meaning, but always evading any clear reference or easy interpretation...Her work feels like a code that we are never quite meant to crack.”⁠
—Katie A. Pfohl, Curator of Modern and Contemporary Art⁠

This month, Ida Kohlmeyer’s painted aluminum sculpture Rebus 3D-89-3 returns to the Sydney and Walda Besthoff Sculpture Garden, newly refreshed from structural repairs and brandishing a brand new coat of paint. The expert restoration—undertaken by Kohlmeyer’s longtime fabricator G. Paul Lucas of Lucas Limited in Louisburg, Kansas—brings the work back to its intended brilliancy and allows us to appreciate the work of one of Louisiana’s most influential and enigmatic abstract artists anew.

Kohlmeyer, a native New Orleanian, is nationally recognized for her vibrant abstract paintings and sculptures, which are among the most vanguard works of modern art made in New Orleans during the twentieth century. She is best known for her signature “cluster” compositions: large painted canvases divided into loose grids filled with vibrantly colored abstract shapes and forms that are at once abstract, linguistic, and deeply personal.

These symbols—either gridded on canvas or presented as freestanding sculptures—exist as a kind of pictographic code, inviting us to try to decipher their meaning, but always evading any clear reference or easy interpretation. Often titling her sculptures Rebus, a term that refers to a type of puzzle or “picture riddle” in which words are represented by combinations of pictures and letters, her work feels like a code that we are never quite meant to crack. 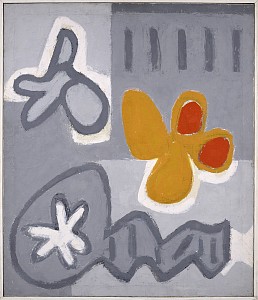