Christine Berry and Martha Campbell often finish each other’s sentences—and why wouldn’t they? The art dealers have worked together for nearly a decade, and decided to strike out on their own in 2013, founding Berry Campbell gallery in Chelsea, New York. Exhibiting postwar and contemporary work, the gallery seeks to showcase underrepresented artists who still played key roles in the popular movements. But, as Campbell notes, they don’t just stay in one lane: “We don’t have any real parameters—Christine and I have similar taste in terms of what we like.” On the occasion of the gallery’s latest show, “Edward Avedisian: Reverberations,” Surface caught up with the pair to discuss their role in the Chelsea gallery scene, the role of physical spaces in an increasingly digital world, and more.

Tell me about the origins of Berry Campbell. What did you feel was missing in the Chelsea gallery community that you wanted to become?

Campbell: Seven or eight years ago, Christine and I worked together at a large Midtown gallery specializing in American paintings and abstract expressionism, notably painters from from the East End of Long Island. We absolutely loved working together, and she had been in the business for about 15 years longer than I had, so I always felt she was a great mentor and confidante. When that gallery closed, I didn’t want to find a job working for “the man” at another gallery, so Christine and I talked. We discovered a gap in the Chelsea art scene: a few galleries showed artists that were well-respected back in their day, but for whatever reason—whether it was race, gender, or geography—they had fallen off the map. We felt that our role could be bringing these postwar and abstract expressionist artists back to the forefront by telling their stories and showcasing their contributions to the movement.

What kinds of artists does the gallery represent, or seek to represent? You’ve been vocal about championing female artists. What kind of work speaks to you and adds to your roster?
Berry: Recently we’ve had some critical acclaim by featuring women artists from the 1950s who were part of the group of artists that you know, like Joan Mitchell, Helen Frankenthaler, and Elaine de Kooning, but maybe didn’t have as wild of lives or as much written about them. We’ve done exhibitions of Perle Fine, who was part of the Ninth Street Show. She’s recently been exhibited at the Guggenheim, and we’ve represented her for more than eight years, so she’s finally getting her due. Yvonne Thomas is another artist from the 1950s whom we’ve shown twice. We’re trying to get the word out there.

You’re both so steeped in gallery and museum worlds, and have deep art historical backgrounds. What makes Berry Campbell different from your past ventures?

Campbell: It’s a true collaboration. Taking on artists and estates is truly personal because not only are you showing the artist’s work, you’re honoring their life. You have to truly believe in the wholeness of the artist and the people you work with. We’re always open to hearing ideas and seeing bodies of work that haven’t been seen before. Christine embraces my ideas, and I embrace Christine’s ideas. All of us work together.

Has Berry Campbell added any exciting new artists to its roster recently?Campbell: Our most recent addition was Ida Kohlmeyer. We showed her work in the spring—it was supposed to only last a month, but lasted through the pandemic.

Berry: She’s a New Orleans artist and is really wonderful. She started out as an abstract expressionist and then shifted her style to these great kind of hieroglyphic paintings.

It’s exciting that you’ve reopened after months of online viewing rooms. How has Covid-19 impacted your programming? Has it made you reconsider the gallery’s role?

Berry: We have a beautiful ground space on West 24th Street in Chelsea across from Gagosian and Matthew Marks. And before the pandemic, we used to have a hundred people come in on a Saturday afternoon, and then the gallery closed. We switched to having viewing rooms on our website, but I still believe that people need to see art in person. That’s why we’ll always go to museums and art galleries—you have to see a painting to experience it or see a sculpture outside to be a part of it. While the digital market is growing, you have to see something in person to get the true feeling and sense of scale. 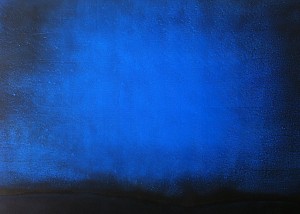 Artists and Scholars on "blue." A Virtual Talk with Artist Susan Vecsey
This is a virtual program through ZOOM
Thursday, September 10
4 pm
$10 members, $20 non-members

Now a rising star in the Hamptons art community, Susan Vecsey was a student of Graham Nickson at the New York Studio School and a visiting artist at the American Academy in Rome in 2012. With solo museum and gallery shows, she has garnered such critical raves in the arts press for her “virtuoso painting.” Grab a favorite cocktail and join us for this lively and informative session in the comfort of your home. 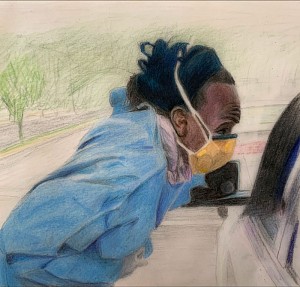 The Brooklyn Rail | Mike Solomon: Artist Stories from the Pandemic

At the same time, quarantine has compelled artists to connect with their communities in new ways. Jeremy Dennis, a tribal member of the Shinnecock Indian Nation, is known for his photographs exploring issues of Indigenous identity and cultural assimilation. With exhibits and photoshoots cancelled, he now works with his father to restore the family’s house on the Shinnecock reservation. It will serve as his home, studio and as a communal art space for an artist residency. Roz Dimon works with the Children’s Museum of the East End to bring art to kids within the Latin American community, Zooming with them, and encouraging them to express their fears and joys. But unlike these artists, Mike Solomon had to leave town in February and head to Florida to care for his 102-year-old mom. While there, he met first responders at the Multicultural Health Institute, an organization dedicated to health care for African Americans. The gripping reality of Black physicians risking their lives—first on the pandemic’s front lines, and then again, walking along the street as people of color—moved Solomon to honor them. In a departure from his abstract paintings and sculpture, he has produced a compelling series of pencil drawings, portraits of Black physicians that unfurl the disturbing personal and political imperatives underlying this coronavirus saga.

This evolving archival project hanging on a video grid invites us into artists’ studios, to glimpse their stuff amidst their artworks, to glean the curator’s response to today’s predicament for artists and museums, and to preserve an intimate anthology of artists’ stories during the pandemic. 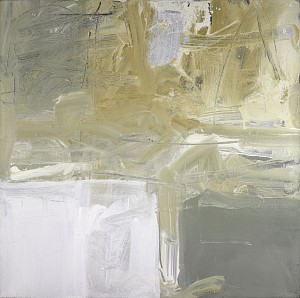 The New York Academy of Art is taking up a five-month residency at the Southampton Arts Center, where it will present 2020 Vision, a spectacular exhibition featuring over 60 artists and writers. Co-curated by Academy President David Kratz and Stephanie Roach of the FLAG Art Foundation, and edited by Emma Gilbey Keller, 2020 Vision will be on display from Saturday, July 25 through Sunday, December 27.

"The pain, loss and uncertainty of the ongoing COVID-19 pandemic. The awakening cry for social justice following the murders of George Floyd, Breonna Taylor, and Ahmaud Arbery and many others. The unnerving possibility of global recession. 2020 has already experienced seismic events that are shifting values and shaping our choices as citizens and as creators," Kratz and Roach noted. "Artists and writers are always the antennae of our society, all the more so at a time as challenging as this one.  They have an opportunity—some might say, a duty—to interpret this moment and imagine the world not only as it is, but also as it could be."

2020 Vision will encompass visual artworks from art students and rising stars to contemporary icons, as well as a myriad of texts, such as poetry and essays, and video diaries.

"This is the guiding challenge of the group exhibition, 2020 Vision.  We asked artists, writers, and creative thinkers to consider three questions of critical importance: Our lives will never be the same, but what will change look like? What do we want to keep as we rebuild? And what must we guard against?" they said.

“In Between,” the title of Susan Vecsey’s show, refers both to the strange period of quarantine we currently find ourselves living in, as well as the double nature of the painter’s work, in which she floats an acquaintance with artists such as Mark Rothko and Helen Frankenthaler and their landscape-influenced abstractions with her own experience of non-objective art in response to the natural world (Vecsey lives part of the time in East Hampton). The work is subtle, deliberately beautiful, and historically cognizant of the New York School and its history during the past half-century, in particular the ongoing perceptions of a Color Field predilection. If one felt compelled to make a choice, it can be said that the works tend to lean in the direction of landscape; their simplicity makes them strong in an abstract sense, but we never lose the implication that we are close to land, to water, and to the sky. Individually, the paintings are attractive, but there is also a cumulative effect, in which the paintings work a sympathetic magic by creating a pastel-like mood and atmosphere, in which both the beauty of nature and also of art are handled with a notable measure and restraint.

The condition of being in between needs to be remarked upon; much of good painting today plays with the idea that an imagery can share aspects of stylistic genres that play off of difference in their essence. Yet it can be noted that nothing is purely abstract nor entirely figurative. Elements or parts of the painting can flow in and out of meanings that take on both styles. It is hard to see both approaches occurring in the same moment; we remember those visual paradoxes where, looked at one way, the image represents one kind of object; and then, when the mental intelligence shifts, another image comes into being--but both images cannot be processed at the same time. Perhaps Vecsey’s general achievement is to render a visual system that jumps from a particular manner of looking into another. While this process is not new--we have the extraordinary achievement of Rothko, mentioned above--its innate complexity and willingness to occupy different ways of seeing within the same composition make it wonderfully current, not to mention extraordinarily interesting as art. 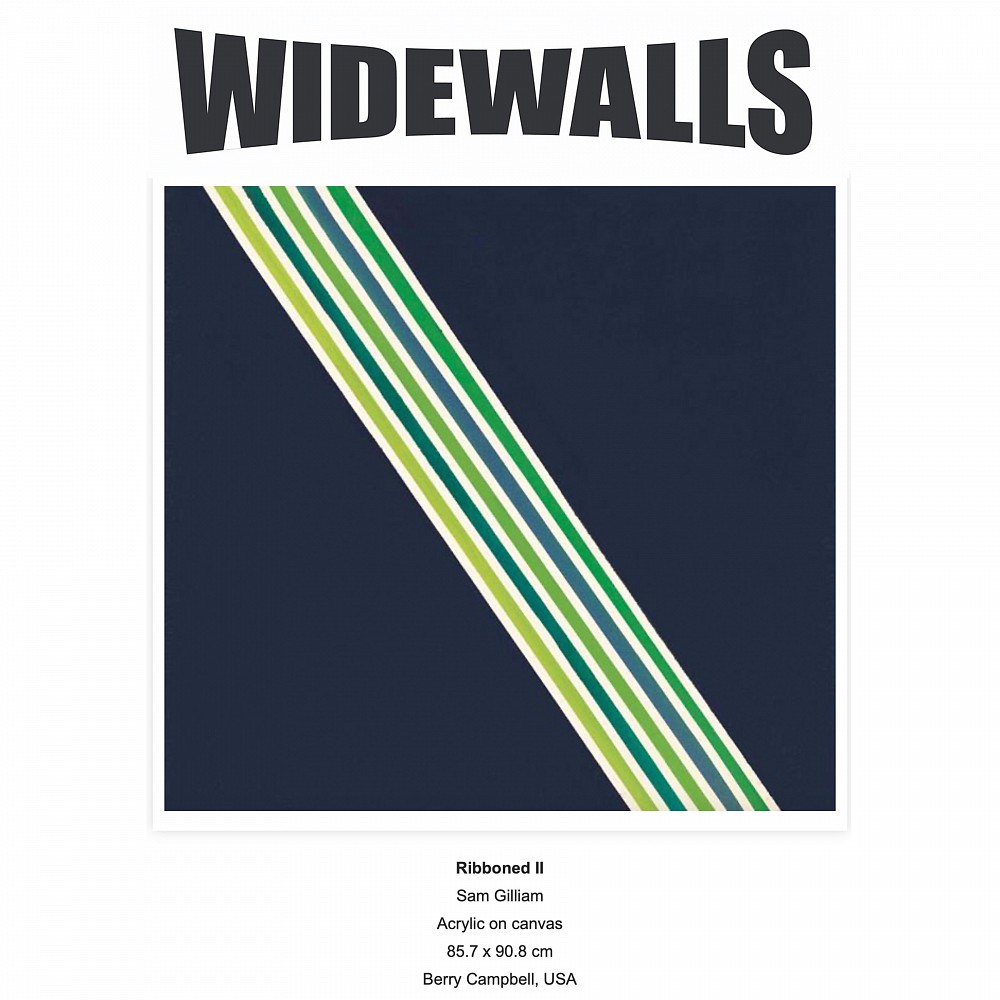