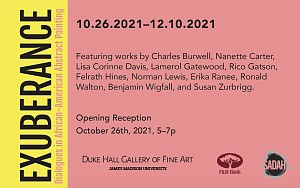 The upcoming exhibition at Duke Hall Gallery of Fine Art, Exuberance: Dialogues in African American Abstract Painting, celebrates African American painters and challenges received narratives about abstract art and who makes it. Abstract paintings by African American artists have often been overlooked and omitted from the history of art presented by white scholars and white dominated art institutions, yet their works have contributed powerfully to the field of painting. This focused presentation of paintings will feature works from the 1950s to present day, forging cross-generational dialogues about racial identity, dynamics of color and pattern, as well as rhythm, movement, and breath.

Public programming will include a discussion on November 10, 5p of the history and politics of African American painting led by Dr. Jordana Saggese, Associate Professor at the University of Maryland and award-winning author of Reading Basquiat: Exploring Ambivalence in American Art. Contributing artist Lisa Corinne Davis will offer an online artist talk on Nov. 16 at 5pm. The exhibition will be accompanied by a fully-illustrated catalogue, with scholarly essays and selected bibliography.

Exuberance is co-curated by Susan Zurbrigg and Beth Hinderliter. Susan Zurbrigg is a nationally exhibited artist, educator and activist. She is Assistant Dean of the College of Visual and Performing Arts at JMU as well as a Professor of Art. Dr. Beth Hinderliter is Director of the Duke Hall Gallery of Fine Art and an Associate Professor of Art History.  Her book, More Than Our Pain: Affect and Emotion in the Era of Black Lives Matter, was published by SUNY Press in 2021.

Contact Beth Hinderliter, director of the Duke Hall Gallery of Fine Art, at (540) 568-6407 or by email at hindersb@jmu.edu for more information or to schedule a group visit. 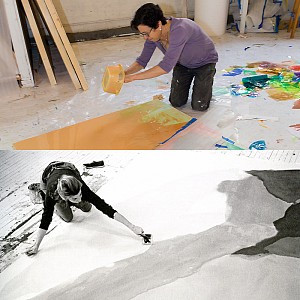 Comparisons between color-field painters Jill Nathanson (born 1955 and Helen Frankenthaler (1928-2011) come naturall, although each is undeniably her own person—and her artwork is uniquely remarkable.

Save the date October 26th at 5:30 pm CT for a cocktail-hour zoom with Jill nathanson and author, curator, and historian Karen Wilkin. Join us for a discussion that will surely cover Sheldon's recent acquisition of Nathanson's painting, Cantabile, and the common ground she shared with Helen Frankenthaler.

Inspired by the powerful works of artists John Sims, Mike Solomon, and Kirk Ke Wang on view in Skyway 20/21: A Contemporary Collaboration, the museum is proud to host this meaningful community discussion on the impact current and historical racial trauma.

Interior designer and art advisor Elena Frampton is the founder and principal of Frampton Co. With locations in New York City and Bridgehampton, the firm designs and creates interior experiences, specializing in interior architecture, design and art advisement. Elena’s design approach is instinctual from the get-go. She reads a client’s latent desires for their space, bringing to life environments that they themselves didn’t yet know they wanted. Elena’s work gives shape and feeling to visions for where and how we live 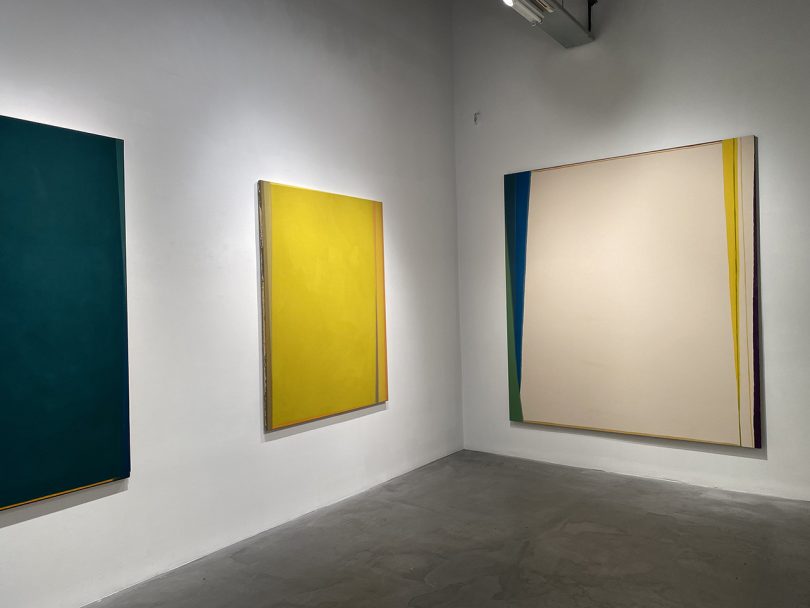 5. Berry Campbell
One of my go-to galleries in New York City is Berry Campbell – great art works, friendly atmosphere and an inspiring robust program! The gallery champions female painters like Yvonne Thomas, Perle Fine and Judith Godwin, giving women artists long overdue consideration on the market. They also represent a diverse range of works with something for everyone: from minimalist Walter Darby Bannard, to the more expressive William Perehudoff, to the very geometric Ken Greenleaf. I can also spend forever perusing their online inventory – a convenience especially now. 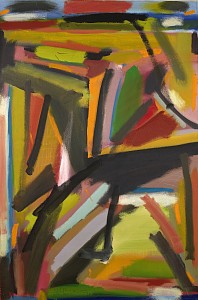 "Point of Departure,” the fall’s major exhibition at Sheldon Museum of Art, takes its name from a 1964 album by jazz pianist Andrew Hill, a recording that reaches back toward Bach, but nearly 60 years after it was recorded, continues to point to the future.

In similar fashion, the paintings that fill Sheldon’s north galleries reach back to a point just after abstraction’s mid-20th century peak and take non-objective painting forward for six decades, pointing toward what is yet to come.

Impressively, the visually striking, intellectually and historically rich exhibition is primarily drawn from Sheldon’s collection of 20th and 21st century art that is unmatched by any other university museum in the country.

“We have so much abstraction and we’re well known for abstraction, starting in 1910,” said Wally Mason, Sheldon’s director and chief curator. “We shifted from abstract painting to abstract sculpture during George's (Neubert) tenure. But we always acquired some. In my time, this is something we’re continuing to do.”

In using 1958 as its starting date, Mason, who curated the exhibition, ensured that “Point of Departure” would include little work from the “first generation” of abstract expressionists, excluding oft-seen Sheldon gems by Mark Rothko, Willem deKooning, Barnett Newman, Clyfford Still and Robert Motherwell. Read More

The absence of most in-person art fairs in the past year and a half appears to be making the white-hot art market even hotter. That’s the takeaway from the opening day of the pop-up Intersect Aspen art fair, which takes place in a city overrun with billionaires. The fair, which features 30 galleries from 26 cities and was described by one fairgoer as “tiny but exquisite,” attracted a bevy of collectors, including Andrea and John Stark, Janna Bullock, and heiress Elizabeth Esteve.

Sales were fast and furious, organizers said. Galerie Gmurzynska, whose director Isabelle Bscher made a concerted effort not to presell works (as galleries often do at major fairs), sold a Joan Miró painting, Tête (1979), for $2 million in the first hour of the opening day. Two days later, Gmurzynska reported selling another work, a small Picasso titled Compotier avec raisin (Pigeons) (1927) for over $1.5 million.

“Where better to be than Aspen?” asked Christine Berry of New York’s Berry Campbell Gallery. “We have a renewed appreciation for being at an art fair in person.”

Seattle dealer Greg Kucera reported selling work by Chris Engman for $5,000 and by Humaira Abid for $8,000. The gallery is also showing two new works by Deborah Butterfield that were made specifically for Intersect Aspen, and are on view for the first time.

“The fair opened on Sunday morning at 10 with a bang,” New York dealer Nancy Hoffman said. “Starting with energy is key to the success of the event, and this is a success. This is our first in-person fair since the pandemic, and it has been great so far, positive on all levels. The right size, the right place, the right audience, the right fair director and organization.”

Hoffman said responses have been strong to the gallery’s booth theme of wild flowers, which is inspired by Aspen’s floral landscape. With prices for works ranging from $1,800 to $75,000, she said the gallery sold works priced from $5,000 to $30,000.

Half Gallery sold out a booth of works by Hiejin Yoo (prices ranged from $12,000 to $20,000), Young Lim Lee (priced around $8,000), and Umar Rashid (priced around $25,000). Director Erin Goldberger said she was using the opportunity to meet new clients, see old clients, and talk about the artists on view with visitors.

Goldberger said many of the collectors at the fair have not been back to New York since the start of COVID, so this is the first time many are seeing artworks from galleries they work with in person. Emmanuel Perrotin sold works by Daniel Arsham from two different series, including one featured prominently in the booth, Quartz Eroded Basketball Hoop (2021), which sold for a price in the range of $60,000 to $90,000.

Edward Cella Art and Architecture gallery sold a painting by Wosene Worke Kosrof, House Full of Words (2014), for $46,000, with strong interest from buyers in additional works. “I’m pleasantly surprised by the quality and intelligence of the collectors, who are geographically dispersed throughout the country,” said gallery owner Edward Cella.