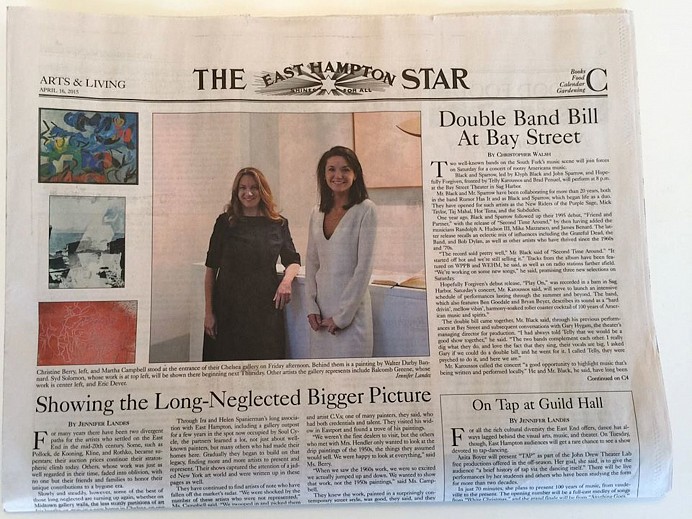 For many years there have been two divergent paths for the artists who settled on the East End in the mid-20th century. Some, such as Pollock, de Kooning, Kline, and Rothko, became superstars; their auction prices continue their stratospheric climb today. Others, whose work was just as well regarded in their time, faded into oblivion, with no one but their friends and families to honor their unique contributions to a bygone era.

Slowly and steadily, however, some of the best of those long neglected are turning up again, whether on Midtown gallery walls, the less sturdy partitions of art fair booths, or, now, in a new home in Chelsea, on one of its highest-profile blocks — 24th Street between 10th and 11th Avenues‚ the location of the Berry Campbell gallery.

Christine Berry and Martha Campbell started their gallery 18 months ago after working for several years at Spanierman Modern; both moved on around the time of Ira Spainierman’s retirement. As they pursued other opportunities, they realized they had many connections in the art world in common.

“It seemed to make sense to work together,” Ms. Berry said at her desk in the back space of the gallery. Ms. Campbell agreed, “it just seemed like a natural progression.”

Other people, including some of their clients from Spanierman and the artists they showed there, thought so too. “We continued a lot of relationships from where we were. We were new, but not new on some level,” Ms. Berry said.

Through Ira and Helen Spanierman’s long association with East Hampton, including a gallery outpost for a few years in the spot now occupied by Soul Cycle, the partners learned a lot, not just about well-known painters, but many others who had made their homes here. Gradually they began to build on that legacy, finding more and more artists to present and represent. Their shows captured the attention of a jaded New York art world and were written up in these pages as well.

They have continued to find artists of note who have fallen off the market’s radar. “We were shocked by the number of these artists who were not represented,” Ms. Campbell said. “We swooped in and picked them up.” They are the exclusive representatives of the estates of East Hampton artists such as Syd Solomon, Dan Christensen, Balcomb Greene, Gertrude Greene, and, just recently, Charlotte Park, who was the wife of James Brooks. They also represent the very much alive Susan Vecsey and Eric Dever, who are connected to the South Fork. In addition, the gallery has smaller inventories of work by Perle Fine, Jimmy Ernst, John Little, and Ray Parker.

They also highlight periods that more timid dealers would never touch. You might call it the Raymond Hendler phenomenon. Hendler, who spent time in East Hampton during the apex of the New York School and then late in life, showed with Pollock and Kline in the 1940s and ’50s, “but no one knows his name,” said Ms. Berry. His style changed in the ’60s, and he moved to Minnesota to teach. Ms. Campbell and Ms. Berry found him by poring through old gallery records and artist C.V.s; one of many painters, they said, who had both credentials and talent. They visited his widow in Eastport and found a trove of his paintings.

“We weren’t the first dealers to visit, but the others who met with Mrs. Hendler only wanted to look at the drip paintings of the 1950s, the things they assumed would sell. We were happy to look at everything,” said Ms. Berry.

“When we saw the 1960s work, we were so excited we actually jumped up and down. We wanted to show that work, not the 1950s paintings,” said Ms. Campbell.

They knew the work, painted in a surprisingly contemporary street style, was good, they said, and they felt confident in showing it. They sold eight paintings during the show and another five in December at the Miami Project art fair. “It shows people want to learn more about these artists, and not just for the one period that they’re known for,” Ms. Campbell said. Now, the hashtags “Hendlermania” and “raymondhendler” have started to attract posts on Instagram.

Beginning next Thursday, Berry Campbell will take a similar approach with Syd Solomon, another East Hampton artist once shown regularly, but who has not attracted much attention lately. While they considered a retrospective, they chose instead to focus on what they and his family believe is his best work from the ’60s and ’70s.

Michael Solomon, his son, an artist himself, has devoted many years to helping artists and their families manage their estates. He praised the gallerists’ unique sensibility, saying that when an artist’s peers die away, few are left who care about the artwork. “Having younger people make a bridge to older artists is a culture-building enterprise. It’s being an activist in the culture. Not all dealers do that, in fact it’s very rare.”

Mr. Solomon agrees with the curatorial vision of his father’s show. “His work from the ‘70s is probably his strongest,” he said. Solomon, who died in 2004, was one of the artists who missed the early development of Abstract Expressionism while serving in World War II. “He never pretended to be part of that beginning,” his son said. “It took a while for him to take those ideas and evolve them in his own way.” A leading critic of the New York School, Harold Rosenberg, told the artist at the time of a 1973 retrospective that he was getting better as he aged. “For Harold Rosenberg to recognize that it had taken him time to evolve was cool for us to hear,” Mr. Solomon recalled.

By starting with that period for Solomon’s Chelsea introduction, the dealers and the family feel he will be best represented to new generations. “I don’t think artists are only great when certain moments are hitting their high point,” Mr. Solomon said. “Berry Campbell show the bigger picture, and are good at not showing bad paintings.” Annie Solomon, the artist’s widow, is ecstatic with the way the show has developed, Mr. Solomon said. “She has been around the art world for decades. She’s seen a lot and she loves them. They are old-school dealers. Not many dealers care that much.”

He also praised the partners’ take-no-prisoners attitude. “It takes balls to have a ground-floor gallery on the same block as Gagosian. They didn’t get a fifth-floor space. They put all their eggs in one basket and went for it.”

The dealers themselves had said as much. “We could have had a gigundous space on a high floor, but we knew this was it,” Ms. Berry said.

The bet has paid off, with 200 visitors every Saturday and a sale just that morning from someone who had passed by their current Walter Darby Bannard show the day before on the way to another 24th Street gallery. This summer, Gagosian will borrow one of their Dan Christensen paintings for a show in London.

“We are either super-smart or super-crazy,” Ms. Berry said. “You can call us all those things, but we know good paintings.”