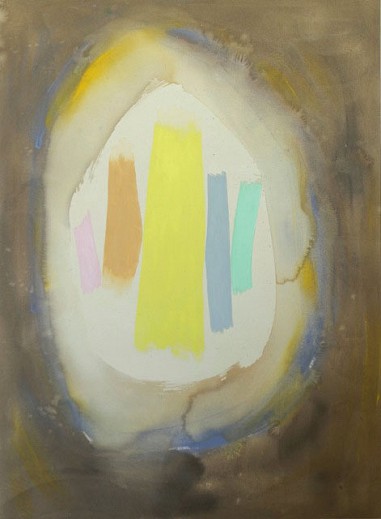 Sparsely populated, windswept Saskatchewan gained international attention in the 1940s and 50s as the first region in North America to elect a government on a socialist platform. This was huge news at the time, published in Time magazine and the New York Times. Eminent artists and critics were drawn to the University of Saskatchewan’s summer program, the Emma Lake Workshops, that operated in a lush, remote area of the province northwest of Saskatoon.

Emma Lake looms large in Canadian art history, operating for 77 years between 1935 and 2012. It became an important Modernist hub in the 1950s and 60s. Saskatchewan native William Perehudoff (1918-2013) was an early participant at Emma Lake, attending such legendary sessions as the 1962 workshop with American art critic Clement Greenberg and the 1963 workshop with color-field painter Kenneth Noland.

“…beginning in the early 1960s, Perehudoff moved decisively towards the kind of pared-down abstraction that established his reputation as a painter to be reckoned with, addressing…the same issues in his work as the vanguard artists of the time whom he had come to know and regard as friends. Like his friend Jack Bush in Toronto, Perehudoff found himself investigating territory identical to the American Colour Field painters; like Bush, he claimed some of that territory as his own, viewing it, in current academic parlance,  ‘through the lens’ of his own uniquely Canadian formation.” Excerpt from William Perehudoff: The Evolution of an Artist, by Karen Wilkin (quoted by Mendel Gallery).

In an acclaimed career that spanned over seven decades, Perehudoff continued to live in rural Saskatchewan with his wife landscape painter Dorothy Knowles, participate at Emma Lake and exhibit internationally. A major retrospective of his work titled The Optimism of Colour was organized by Mendel Gallery, Saskatoon, in 2010 and toured nationally until 2012.

Awarded the Order of Canada, William Perehudoff passed away in February, 2013, at the age of 94. Canadian Art published a wonderful photograph of Mr. Perehudoff standing in a field on his Saskatchewan farm. Though the artist gave his paintings non-descriptive titles after the 1970s, I can’t help but relate his work to the vast prairie landscape he lived in. I grew up in Manitoba and remember the immense skies and extraordinary light. I left Berry Campbell gallery feeling that, while color field painting may be an intellectual exercise, viewing it is an emotional one.

Stroll down to Chelsea on New York’s High Line! The High Line passes right over the art galleries of West 24th Street, with access to the High Line just a block away at West 23rd.