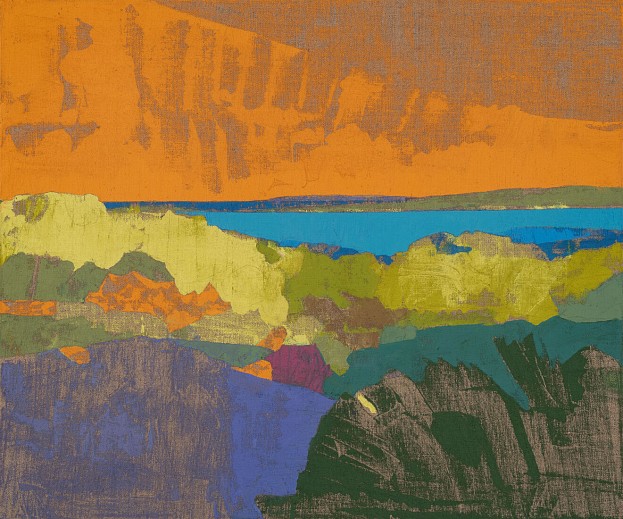 In 2020, Eric Dever was considered to be a project artist at The Andy Warhol Preserve Visual Arts Program in Montauk, New York. The artist created a series of works related to the landscape and the natural world. This opportunity allowed Eric Dever to have a private place to escape the pandemic world. As a result, the artist created this important group of 18 paintings.

Midpoint through the project, Dever turned his attention from Amsterdam Beach to the greater Montauk area. Upon exploration, Dever found a brochure distributed at the Montauk Lighthouse appropriately titled, “The Explorer’s Club,” originally published in the 1950s. Dever learned about the Montauketts, the land, and the people of Eastern Long Island.

In the Warhol Montauk Project series, Eric Dever takes cues from Warhol’s Self-Portrait (1966) pairing primary and secondary colors, as well as employing the use of different shades of the same color on coarse linen and canvas. Dever applies paint on surfaces rubbed into the support, a process known as decalcomania. Decalcomania was explored by the surrealists and a hallmark of Dever’s painting process. Coupled with ample unpainted surface or negative space the paintings themselves at times resemble serigraphy.

Light sensitivity, shadow, temperature and sound are experiences the artist explores, palpable in these new paintings. The paintings can be viewed online at Artsy or at Berry Campbell Gallery, New York.