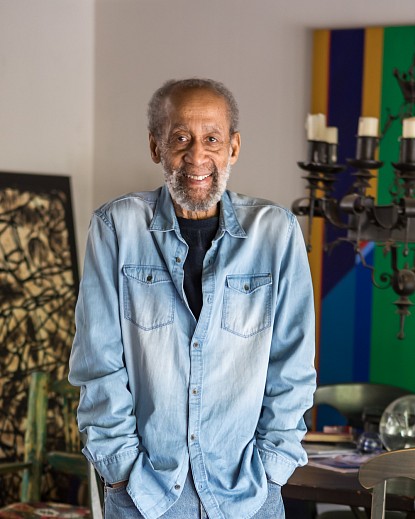 Artist Frank Wimberley, at 94, is still full of surprises

New York -- In 2005, on the eve of a solo show of his work in Southampton, N.Y., the abstract artist Frank Wimberley explained that he often viewed his artwork as living things. Giving a painting “time to breathe,” was an important part of the creative process, he said, adding that it wasn’t uncommon for him to step away from a work in progress. “Then you can return to it, just like with any living, breathing thing, and find a few surprises.”

At 94 years old, Wimberley is still uncovering surprises in an expanding body of work infused with bold colors and dramatic, gestural strokes. In a career that has spanned more than 50 years, and that includes paintings, sculptures, and ceramics, he’s managed to embrace the creative process as a continuous adventure.

This month Berry Campbell Gallery in New York’s Chelsea district is hosting a survey exhibition of collage works by Wimberley that will feature both paintings with collage elements as well as traditional collage works on paper.

(Take a gallery tour of the artwork with Frank Wimberley here.)

The show, to be held March 18 to April 17, will also highlight some of the artist’s most important collages to date, including several examples going back to the early 1970s, says gallery co-owner, Christine Berry. She opened the 2,000 square-foot ground floor gallery and exhibition space with Martha Campbell in 2013 with a focus on Postwar Modern and Contemporary Art.

The show arrives as a generation of older African-American artists - from Lorraine O’Grady and McArthur Binion to Melvin Edwards and Howardena Pindell - are enjoying renewed attention. Museums are mounting more exhibitions of their work as auction houses and galleries stock their rosters with their names. At a time when many artists in this group are slowing down, interest in their work is accelerating.

But the attention isn’t new for Wimberley.

A well-known presence in the art scene on the East End of Long Island for decades, he’s been an important figure in African-American art since the 1960s. And he’s long been acclaimed for his lively, tactile artwork, which the New York Times once described as “beautifully brushed and infused with a light that magnifies their intensity.”

In the past year, Wimberley’s paintings have been acquired by the Studio Museum in Harlem, the Smithsonian Museum of American Art in Washington, and the Saint Louis Art Museum. His artwork is also included in several important museum collections, including the Art Institute of Chicago, Metropolitan Museum of Art in New York, and the Yale University Art Gallery in Connecticut.

The show at Berry Campbell includes a host of multi-layered, sophisticated paintings that continues in the Abstract Expressionist tradition.

“What has always excited him is to take the theme or feeling from the very first stroke he lays down and follows it to its particular conclusion,” says Berry. “Very much like creating the controlled accident.” Wimberley’s improvisational method is akin to jazz, Berry says, which has always played an important part of his life and a theme in his art. (Wimberley had long friendships with several jazz greats, including Miles Davis who purchased a number of his artworks.)

“He enjoys the surprise of arriving at definitions that seem to come to life on their own,” added Berry.

Wimberley is also a part of the long legacy of artists’ communities on New York’s East End. In 1960 he and his wife, Juanita, designed and built a modernist, sky-lit home in Sag Harbor, a Hamptons town with a long history as a place where Americans of African descent had lived continuously since first settling in the area in the 1600s.

In Sag Harbor, Wimberley found an affinity with local artists, including Herman Cherry, Rae Ferren, and Bunny Dell. “I learned how generous most artists can be when faced with common problems,” says Wimberley.