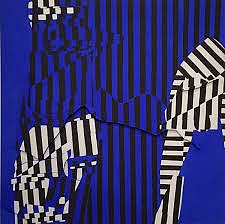 ST. PETERSBURG — The Museum of Fine Arts, St. Petersburg’s major renovation of their permanent collection galleries last fall made the museum feel like a new place.

Now, through a yearlong sharing collaboration, four paintings from the Art Bridges Collection by celebrated 20th century American artists are on display in the museum’s Modern and Post War galleries.

Works by Jacob Lawrence, Hughie Lee-Smith, Norman Wilfred Lewis and Lee Krasner will remain on display through February 2022. A fifth painting by Marsden Hartley will arrive in June and remain on view through August 2022.

The loans expand the museum’s inclusivity with works by Black, female and LGBTQ artists.

“Because we have such a commitment to both acquiring and presenting works by traditionally underrepresented artists, I think Art Bridges was really excited to help us move forward in that vein,” said Kristen Shepherd, executive director and CEO of the Museum of Fine Arts.

Art Bridges is a nonprofit arts foundation created by Walmart heiress Alice Walton. It seeks to expand access to American works of art by acquiring works from the colonial era through present day and makes them available as loans for institutions across the country.

“It’s incredibly generous because it gives smaller museums an opportunity to showcase masterpieces,” Shepherd said. “To be able to share them with the community is a huge gift.”

Here are the five works:

Jacob Lawrence, In the Heart of the Black Belt

Considered one of the most important artists of the 20th century, Lawrence is also one of the first nationally-recognized Black artists. This 1947 painting was part of a series exploring Black Southern life, commissioned as illustrations for Forbes magazine.

Lewis was known for portraying racism and social injustices. He eventually turned to abstraction, making him the only Black artist associated with the first generation of Abstract Expressionism. This transitional 1945 work bridges his previous style of social realism with modern abstraction.

Lee-Smith explored inequalities of racism, themes of isolation and alienation and the hope of bringing positive change, which is referenced by the balloons in this 1954 painting.

Krasner was a female Abstract Expressionist and the wife of Jackson Pollack. This 59″ x 58″ 1957 work was part of the 17-painting “Earth Green” series, which reflects an artistic transformation based on Pollack’s death. Katherine Pill, the museum’s curator of contemporary art, said that the piece serves a reminder that “the male-dominated narrative of Abstract Expressionism still crucially needs to be expanded.”

Hartley is considered crucial to the development of modern American art. His presence in the museum will bring a dialogue about the struggle of LGBTQ artists to exist and create in a discriminatory world. This 1938 painting depicts a Maine landscape that includes Christian imagery.

The works have been placed to highlight other artwork in the galleries. Krasner’s piece calls attention to two other female Post War artists, painter Perle Fine and sculptor Dorothy Dehner.

An example of Norman Lewis’ later abstract work also hangs in that gallery.

The MFA has prints by Krasner, Lawrence, Lee-Smith and Lewis in its own collection, but they are light-sensitive works on paper that can’t be on display permanently.

It’s notable that the Museum of Fine Arts, St. Petersburg is the first museum to have both Krasner’s Re-Echo and Lawrence’s In the Heart of the Black Belt on view from the Art Bridges Collection.

Programming surrounding the new pieces will be announced soon.