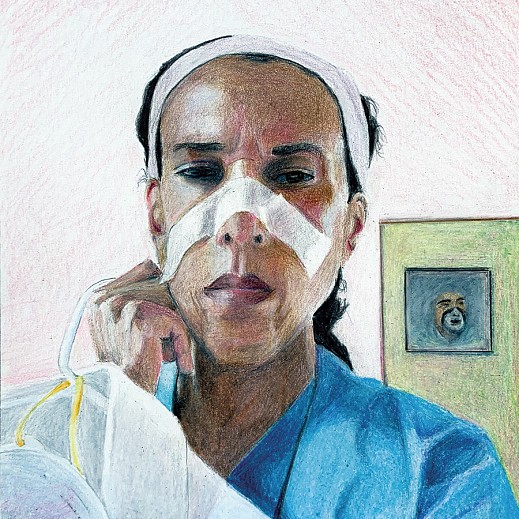 "I just hope people see what's there," says Mike Solomon of the portraits comprising his latest exhibition, Scenes from the Pandemic, showing online this November through the Sarasota Art Museum. Drawn in colored pencil, the series captures, in part, the long terrible arc of that period in 2020, beginning as a tribute to black doctors and essential workers but ultimately spiraling into an emotional account of protesters and journalists under assault in a world caught on fire and an artist coming to terms with what he sees. Though isolated from his studio while caring for his mother during the pandemic, he couldn’t ignore the images on TV, the photographs arriving daily on the doorstep or his artist’s instinct gnawing at his inactivity.

“A dissatisfaction with being more remote than I wanted to be in terms of activism,” Solomon says. “I didn’t want to be outside of it looking in.” And in those photographs, he found himself struck by a particular aspect of the social unrest unfolding before him. “There are black doctors helping anyone who walks through the door,” he says. “Yet they take their scrubs off and walk outside and they might get shot. Can you imagine that?” So the renowned abstract artist picked up a colored pencil and tried something he hadn’t done in near 50 years: draw from a photograph. And as he did, he embarked on both an artistic and emotional journey.

Solomon admits to a certain “philosophical prejudice” against drawing from photo references, saying that he never quite understood why an artist would spend their time on such a pursuit when the photograph already exists. “Now I do,” he says. Not only did Solomon find the exercise an artistic challenge, more engaging and difficult than he had previously supposed, but he also found that, in forcing himself to absorb each image in minute detail and re-create it from his own hand, it awakened greater compassion for his subjects.

“I go down into this little world and the empathy emerges,” he says. “It’s a way of digesting it in an empathetic way you wouldn’t normally.” It’s an empathy that Solomon hopes his audience can partake in, if they just take a moment to stop and really see what has happened on their and his collective watch. And if the images in the papers didn’t get the point across, maybe seeing them in a different context will. “As soon as it becomes a ‘work of art,’ people stop a lot longer,” Solomon says. “That’s just the magic of art—it slows the moment down.” SRQ