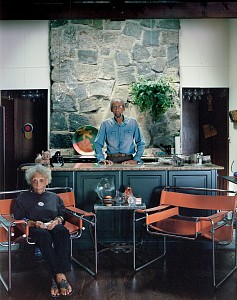 In the 1930s, a group of trailblazing African-Americans bought plots for themselves in Sag Harbor, establishing a close-knit community that’s spanned multiple generations.

WHILE VACATIONING ONE summer in the late 1930s, Maude Terry decided to go fishing. On her way to Gardiners Bay in eastern Long Island, she came across a secluded, underdeveloped, marshy, wooded area that faced a beach. Immediately, she felt a sense of tranquillity in the sylvan space, surrounded by tall old oak and walnut trees. Green shrubbery and weeds grew amid the sand at her feet, and her skin turned sticky in the salt air. It was heaven.

At the time, Terry was a Brooklyn schoolteacher who spent most summers with her husband, Frederick Richards, and her daughter, Iris, who were both doctors at Harlem Hospital; her sister Amaza Lee Meredith, the chair of the art department of Virginia State University in Ettrick, Va. (who was also one of the first Black female architects in the United States), would occasionally join them. The sisters had grown up in Lynchburg, Va., and lived most of their lives up and down the East Coast: Come summer, Terry would usually rent a cottage in Eastville, an area on the outskirts of Sag Harbor, the beachfront village that — although it straddles the rich, mostly white enclaves of Southampton and East Hampton — has always remained a bit more subdued, at least compared to Long Island’s other storied warm-weather escapes, which begin at the eastern edge of Queens and stretch more than 100 miles out into the Atlantic Ocean.