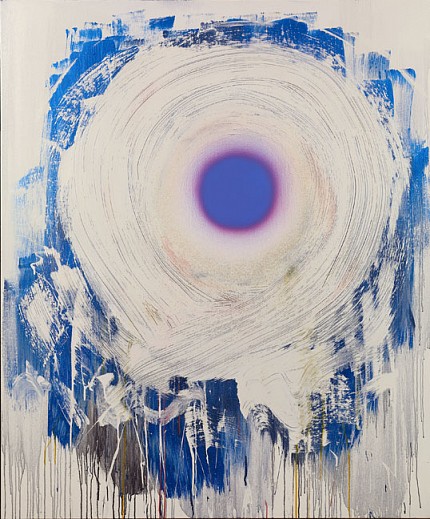 BERRY CAMPBELL is pleased to announce the representation of the estate of Dan Christensen (1942-2007), a leading figure in the Color Field movement, whose relentless experimentation with new tools and materials made him among the most ambitious abstract and gestural artists of his time.  Christensen's exuberant art contributes to the gallery's prominent role as a showcase for established and mid-career artists in the modernist tradition.  Other estates and artists represented by the gallery include Edward Avedisian, Walter Darby Bannard, John Goodyear, Balcomb Greene, Gertrude Greene, Raymond Hendler, Stephen Pace, William Perehudoff, Edwin Ruda, Albert Stadler, and Syd Solomon.  Berry Campbell looks forward to hosting a solo exhibition of Christensen's paintings in 2015.

During his early career, Christensen’s art was championed by important critics of his time, notably Clement Greenberg, and his work entered major museum collections. However, it is only recently that his multifaceted oeuvre has received the widespread attention it has long deserved.  The traveling retrospective, Dan Christensen: Forty Years of Painting, organized by the Kemper Museum of Contemporary Art (Kansas City, Missouri) in 2009, helped make a convincing case for a heightened appreciation of Christensen’s work and his significant place in postwar abstraction.  In a day when artists often held to a specific type of form, Christensen changed his approach and aesthetic often, at times in dramatic reversals and at other times in a return to and an expansion of earlier themes.  His use of spray guns, window-washing squeegees, rakes, blasters, and house painting rollers were not the basis of his art, but the vehicles that enabled him to strive for new ways of seeing.  As noted in a review in Artforum of his Kemper show, the critic Peter Plagens observed that with his gutsy combination of elements, Christensen arrived “at some sort of visual poetry.”

Dan Christensen was born in Cozad, Nebraska in 1942.  Seeing the work of Jackson Pollock on a trip to Denver when he was teenager motivated him to become an artist.  He pursued this aim at the Kansas City Art Institute, Missouri, where he received his B.F.A. On moving to New York in 1964, he rose quickly to fame, as among a group of young artists who were reviving painting during a time that minimalism was prevalent. Christensen first gained renowned for his spray loop paintings, in which he used the spray gun to create repeating calligraphic circles, producing shimmering allover surface effects.  His work progressed in several directions, including his plaids, in which he used rollers and squeegees to "get more paint down on the canvas," resulting in tighter compositions that at the same time had an improvisational quality as their compositions were determined in the artist’s “editing” phase.  In another series, he used sticks and brush ends to cut into thick acrylic strata, abrading his surfaces to let colorful under layers emerge.  In the 1980s, he returned to the loop, using color sprays to create blurred circles and evanescent mandala-like lozenges.

Christensen conjoined his thematic issues in the mid-1990s, creating orbs of colors that seem to melt as well as move through fluorescent and celestial atmospheres, their shifting lines implying the Pythagorean harmony of the spheres as well as atomic energy and matter.  Christensen was creating works of heightened brilliance and intensity when his career was abruptly ended by his early death in 2007.

Berry Campbell is located in the heart of Chelsea at 530 W 24th Street on the ground floor. The gallery is a collaboration between Christine Berry and Martha Campbell.  Berry began her career at the Modern Art Museum of Fort Worth and then continued onto the Whitney Museum of American Art.  Thirteen years ago, she shifted from the non-profit sector to the commercial world.  As an art dealer, she worked with some of the world’s foremost public and private collections.  Martha Campbell started her career at The Phillips Collection in Washington, DC.  She was a director at a major midtown gallery focusing on Modern and Contemporary art.  Berry Campbell is open Tuesday through Saturday, 10 am to 6pm.