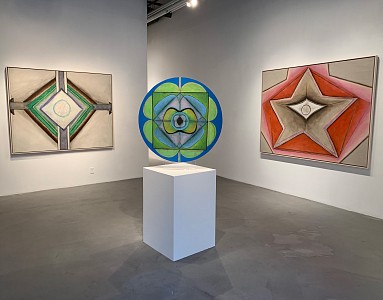 This exhibition titled "Cloistered" by Ida Kohlmeyer at the Berry Campbell Gallery consists of paintings and sculptures from the late 1960s, before she turned to the hieratic abstractions of her later career. In some ways the paintings on show relate to abstract elements found in the art of Georgia O’Keeffe and Hilma af Klint (the early 20th century Swedish abstractionist); they consist of mostly diamond-shaped patterns, with a couple of circular compositions. Kohlmeyer was educated and taught at Tulane University in New Orleans; she studied in Provincetown in the middle Fifties with the German-born teacher and abstract painter Hans Hofmann. In the paintings available to us, we see distinguished, soft-edged nonobjective imagery, in which geometric forms become vehicles for understated emotion. The colors are softly muted, communicating the artist’s ability to transmit feeling through simple designs and quite hues.

While not exactly a serial art, this kind of abstraction builds its effects through repetition of forms from one painting to the next. The diamond-shaped designs hold our interest by building a narrowing focus into the very center of the paintings, which can contain different shapes often circles, but also crosses and slits. They offer a kind of artist’s vernacular; the shapes repeat themselves and create links joining one painting to another. As a result, the body of work joins individual voices to a communal process that asks Kohlmeyer’s audience to appreciate their cumulative effect. Thus, a particularly successful variation within unity occurs, full in keeping with a lot of painting being done at the time these works were made. The larger question, Does such repetitiveness add or detract from the experience of the work? This can be considered as something more theoretical--in the case of Kohlmeyer, the accomplishments brought about by such an approach are genuine, in part because the differences from one painting to the next which are large enough to enable us to see the works as individual efforts rather than as nearly identical compositions.

In “Cloistered” (1969), Kohlmeyer has painted a thin, mostly brown diamond with a thinner dark purple stripe re-enforcing the overall shape, inside of which is another diamond, outlined in white and surrounded by a haze of the same dark-purple color. Inside the confines of the white diamond is a thin, yellow-brown, vertically aligned lozenge, flanked on either side by purple and then dark-brown stripes--the same colors used to define the outer diamond. The title might well refer to the oval deep in the center of the painting; it might even convey something of the spiritual mood that exists in the work. Whatever the motivation for the painting is, the experience of Kohlmeyer’s effort is fully satisfying. It suggests, in abstract fashion, a place of refuge and solace. An untitled work, circa 1969, consists of a five-pointed star shape, within which is a white diamond with a circle in the middle. Outside this puzzle of shapes are found a pentangle of red paint, along with a pink area, following the form of the pentangle in a rough manner, linearly contained by a dark-brown line. Certainly, the star is abstract enough, but the image conveys a primal feeling not unaligned with the spirit.

Kohlmeyer’s shapes can hardly be seen as devotional, yet they are so basic as to be archetypal reworking of forms that may have had spiritual meaning in other, earlier cultures. In “Black Insert” (1968), we see a black diamond shape, in the middle of which is the vertical lozenge; this amalgam of forms is supported by quadrants of off white, defined by green stripes of middling width that outline the diamond. The green lines create a cross behind the diamond that does not in any way evoke a Christian aura.

The possibility of external reference, beyond the abstract form, cannot be entirely dismissed. It would be a major mistake to see the works of art as intimating an atmosphere of piety. It is just that the forms in these completely abstract paintings are so archaic as to raise questions about their origins beyond the intentions of the artist. This happens inevitably. In “Suspended” (1968), we meet more rounded forms: a curving hourglass shape dominates the painting, with rows of undulating, differently colored lines embellishing the upper and lower register of the form. Outside this hourglass is a background of whitish, slate blue curved like a circle. Beyond that, there exists a green diamond, with four pinkish mauve triangles, one in each of the cardinal directions. Finally, a smudged light-yellow band follows the edge of the green diamond.

This is a very detailed description of a group of rather simple shapes seemingly superimposed on each other. It is clear that Kohlmeyer was working with abstraction thoroughly in mind. Any cultural influences or references we ascribe to the painting, done at a time when abstraction was highly prominent, must reflect the viewer’s sensibility more than what he or she sees. In the final work to be discussed, “Star” (1969), a four-pinnacled star shape, a sculpture some six inches deep, displays on one front, four ovoid forms backed by a curving orange shape echoing the forms--in the exact center we find two fork-like shapes in black. Outside the orange form, on the edges of the extensions of the star, are purple areas conforming to the expanded shape. On the six-inch sides of the star other geometrical patterns exist. Here, as everywhere else, Kohlmeyer evokes physical distances, art history, and arrangements of form and color in a highly original fashion. This results in something first-hand, just as creating a sculptural painting, with images on the front and back and sides of the work, is innovatory in a formal sense.

Kohlmeyer’s engaging, attractive paintings make it clear that the recognition afforded by this show, somewhat belated, will hopefully re-establish her achievement for the viewing public. This is needed. The artist likely did not intend her work to be seen in a mystical fashion, yet the paintings do remind us of the recently re-found Swedish artist Hilma af Klint’s mystical efforts. The interesting thing about abstraction is that it can be seen simply as it is, or more than as it is--it depends as much upon the viewer as it does the artist in certain bodies of work. In the case of Kohlmeyer, it is wise not to find evidence of cultural, or spiritual, import beyond the forms themselves--this is the crux of any abstract work made in a secular time. But as I have said, her forms imply all sorts of things, which we might, or might not, pay attention to. A show like this is not only an advance for Kohlmeyer, but also for abstract painting’s ability to stand self-sufficiently, on its own--or, possibly, convey meanings that move beyond the actual experience of the forms.