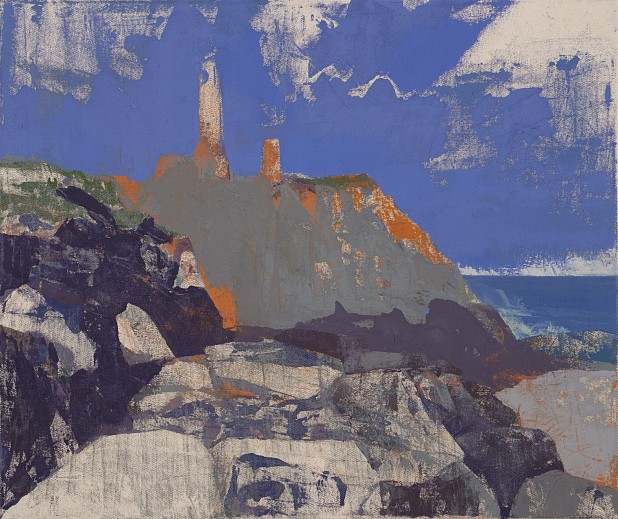 “If you have a minute, can I read you a poem quickly?”

With ample encouragement, artist Eric Dever clears his throat and begins. “Forever – is composed of Nows – / ‘Tis not a different time,” he recites. “Except for Infiniteness – / And Latitude of Home.”

He continues, the last two verses of the celebrated Emily Dickinson poem haunting as ever as they teach a crucial lesson: Every moment that has ever existed was, is or will be a present moment, a “now,” and the infinite is composed of them.
And forever stops for no one. It is with Dickinson’s words in mind that, last year, Dever began a new series of work. Each painting would be inspired by sequential lines of “Forever – Is Composed of Nows –,” the next canvas evolving from the previous.

And not long after he started, Dever cast the idea aside, out of sheer frustration — until recently. “Not too long ago, I realized the way to approach it is not to try to illustrate the poem, but to just select certain paintings and put them together, and that could very much hold the idea,” he said. “For me, I think an artist’s entire oeuvre, if we look at it, it really is a collection of ‘nows,’ and it’s not just ‘nows’ that are in the past. When I engage with my work over time, it’s almost as if that time or that place was in crystal. It’s very clear, the whole thing.”

Dever’s newest body of work, “A Thousand Nows” — on view at The Lyceum Gallery on Suffolk County Community College’s Eastern Campus in Riverhead — is a study in compressed time, the 22 exuberant oils layered with colors that span the artist’s lifetime, from his earliest memories growing up in California.

There, the sun is more intense, the flora brilliant, the Spanish colonial past and Mexican heritage rich, and a warm tone ever present. For that, Dever gravitated toward Cadmium Orange, now mixed with the blue hues of his East End summer twilights.

“I feel very sensitive to color,” Dever said. “I find it often evocative of place, and that could include the past. But I have a sense of color memory, I think. There are certain colors that I seem to return to and for different reasons.”

The colorful paintings of flowers and vegetation transport him back to his childhood — the bird of paradise in his backyard, the agapanthus along the side of his neighbor’s house, the calla lilies nurtured by his grandparents — a place he left behind when he moved to Manhattan at age 24, to attend graduate school at New York University.

“I found the city very exciting and dynamic,” he said, “and I thought that, quite truthfully, if I went to graduate school, it would give me a chance of two years to live in New York and to somehow establish myself one way or the other. I pretty much didn’t look back. I just stayed.”

He would graduate in 1988 with a master of arts and establish a studio in first, Williamsburg, Brooklyn, and then, the East Village, while working part-time at the architecture firm I.M. Pei and Partners for over a decade, while painting and advancing his own work in museum, academic and gallery venues nationwide and overseas.

And though his first show on the East End was just a year later, it wasn’t until he moved to Water Mill full-time in 2002 that his palette began to change.

“I don’t think my work was so impacted by visits because I was responding to my urban interests, and my work reflected the quality of New York City, the vertical aspect of it and the palette, as well, which is a little more somber,” he said. “When I moved here, I returned to a more abstract way of working. I felt I needed to go deeper into my work and into myself. That’s when I began working with white. I let go of all color.”

For four years, Dever limited his palette to Zinc and Titanium White, enabling him to uncover a spectrum ranging from opacity to translucency, while developing a heightened sensitivity to the properties of the linen, canvas and burlap, providing both surface and support in the work.

In 2010, he added black, widening the range and force of his work with gray scales and circles that graded from dark to light.

“It was about that time that I realized that, suddenly, I was approaching a subject that was beyond methods and materials,” he said. “I was working with the idea of light itself. It was just unavoidable, but I didn’t realize that until adding black to the white, and then it dawned on me that that’s where I was moving with this.”

Dever introduced another color, Napthol Scarlet, a modern replacement for Vermillion, in 2012, and three years ago, returned to a full color spectrum while contemplating a spring garden.

“I found it really exciting. It was almost intoxicating,” he said of working with a complete palette of eight colors. “I would use some white, but I wasn’t working with black. I would mix opposite hues together to achieve darks, and I relied a lot on a very dark purple. It seemed to be one of the ways I was able to indicate darkness.”

“The blue hues, I found them to be very satisfying, particularly a blue that’s almost indistinguishable from lavender,” he added. “This is a color that I like a lot.”

The soothing blues are present in nearly every East End landscape that Dever paints, from Trout Pond and the Montauk Lighthouse to Clam Island and Flying Point, all on view in the show.

“I had been looking at these landscapes for years — visiting them, looking at them — but last summer, I decided to try to enter them,” he said. “I wasn’t really interested in painting a picture of them, but I wanted to somehow capture the experience of being in the landscape.”

For Dever, that meant learning by doing. A four-mile hike along the Jessup Neck peninsula left the artist sunburned and “wiped out,” he recalled with a laugh, but ultimately proved to be rewarding. So was a visit to Montauk that shifted his perspective entirely, he said, as he gazed down at the tidal pools.

“There are things you can see in reflection that you can’t see from direct observation,” he said. “That’s become something that’s interested me a lot.”

Echoing his newfound sentiment, three of the original “Forever is Composed of Nows” paintings are included in the show, as artifacts of Dever’s initial concept.

“I ended up somewhere different by posing a question and then being open to the answer. And even if it’s an answer that you really aren’t sure what to do with, or want, a truth comes forward and reveals itself,” he said. “Each painting, in some way, reconstitutes a time or a place. Together, they constitute a lifetime, a life. And when I look at them, when I revisit work, they really do that. They reconstitute something for me. They bring me back; they bring me forward.”

“A Thousand Nows,” featuring work by Eric Dever, will open with a reception on Wednesday, February 5, from 4 to 6 p.m. at The Lyceum Gallery on Suffolk County Community College’s Eastern Campus in Riverhead. A Q&A with Helen Harrison will be held at 4:30 p.m. The show will remain on view through March 11. For more information, call 631-548-2536 or visit sunysuffolk.edu.