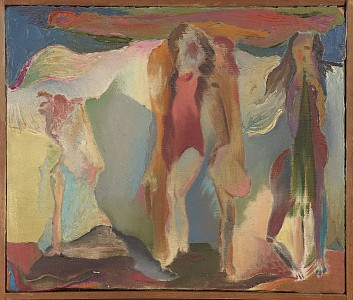 What do Elaine de Kooning, Monir Farmanfarmaian, Helen Frankenthaler, Louise Bourgeois, and Faith Ringgold have in common? They all studied at the Art Students League of New York—and they are all featured in a new show at the school highlighting the accomplishments of its many women students.

Titled “Postwar Women,” the exhibition, curated by Will Corwin, features more than 40 women who studied at the school between 1945 and 1965. “It seemed like the obvious choice because before the war, most of the women students here were wealthy or had family who supported them as artists,” Corwin told Artnet News at the exhibition’s opening. “During this period, you actually get working-class women becoming artists. And of course, you get the Abstract Expressionists.”

Corwin has put together an impressive selection of works by well-known alumna—Lee Krasner, Grace Hartigan, and Louise Nevelson are also among the big names—alongside examples by an intriguing array of artists who haven’t yet been widely recognized for their talents.

“The league’s list of famous graduates is like everybody you’ve ever heard of,” Corwin said. For him, the curatorial challenge was balancing expectations: ensuring that all the major names were in place while still creating opportunities for viewers to discover new artists.

Among those in the latter category are the unsung Ab Ex greats Judith Godwin and Perle Fine, who were also spotlighted in the Denver Art Museum’s 2016 show, “Women of Abstract Expressionism.”

There’s also the Puerto Rican artist Olga Albizu, who studied at the league under the legendary Hans Hofmann. “It was an adventure getting hold of one of her works, because there aren’t many of her pieces in this region,” Corwin said.

Corwin was especially thrilled to include a piece from his own collection by Lenita Manry, who was Hofmann’s assistant in the 1940s. “She did an interview with the Archives of American Art, but no one has ever heard of her,” said Corwin. “She died in 1969, and her best friend gave away her work away to all of the people who knew her—including her downstairs neighbors, who were my parents. I grew up with this painting and it’s amazing to put Lenita’s work on the wall with these famous artists, like Lee Krasner and Grace Hartigan, who she clearly knew.”

Sadly, in the past few months alone, four of the women in the show have died: Mary Abbott, Mavis Pusey, Joyce Pensato, and Farmanfarmaian.

“I particularly remember a lot of the people who are no longer here, but who I knew well,” said the artist Regina Bogart, a close friend of de Kooning’s, at the show’s opening.

The painter, who just turned 91, studied at the league while in high school and college. “I did my first oil painting in Will Barnet’s class, and I am still making work today,” she told Artnet News, crediting the school with having a formative influence on her career. She has an exhibition on view now at the Zürcher gallery.

She was joined by other living artists in the exhibition, who came to the opening in full force. “I’m so happy to be back here,” Lynn Umlauf, another Zürcher artist, told Artnet News. “I worked full-time at a paint store just to go to the Art Students League and paint at night. It was nostalgic to walk in and recognize the entrance. I was looking up the address because I forgot the piece of paper where I had written it down. But then I realized that I still knew where I was going!”