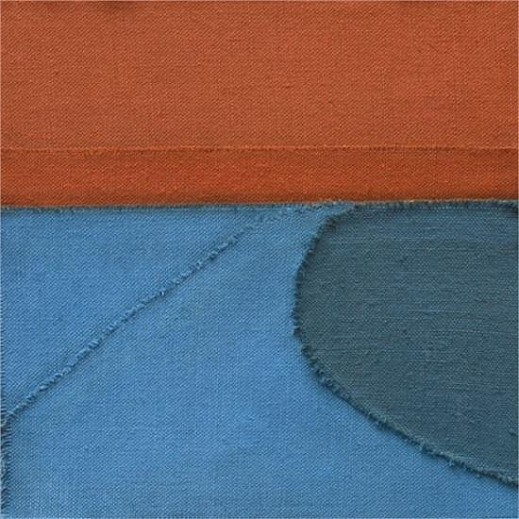 Approaching the Quogue Gallery, I was immediately drawn in by Susan Vecsey’s painting, visible through the side entrance along Jessup Avenue in Quogue, NY. It was awash with warm, radiant color; a vast field of peachy orange. I had seen Vecsey’s work before, in Chelsea at Berry Campbell gallery, and was intrigued with how it would look in this setting in The Hamptons.

I passed through a forecourt with greenery, slate steps and a silvery sculpture by Hans Van De Bovenkamp and stepped into the gallery’s north exhibition space to see Vecsey’s solo show simply titled “Paintings” as it eases into its final week before closing on October 2, 2019. Inside, this impressive painting, Untitled (Orange/Purple/Gold), 2017, greeted me with its vast sky of orange. A circle of the same hue pushed towards the top edge, glowing with a whitish halo. The horizon was marked by a swath of deep purple infused with ultramarine, and a band of ochre yellow suggested sand. I was reminded of our Long Island beaches, in the light of late afternoon on a summer day.

The north exhibition space—one of three distinct spaces at the Quogue Gallery—offers a lush range of Vecsey’s color palette. Striking in contrast is Untitled (Blue/Red), 2019. The velvety red background is particularly strong and a circle within, like a solar disk, is surrounded by a darker border. The horizon line is deeply colored; its straightness emphatic. In this painting, we look out across blue sand towards Homer’s wine dark sea. These colors, less easily be attuned to perceptual reality, heighten the abstract emphasis.

An almost wintry, Untitled (White/Lavender), 2019, is a painting of mists with hints of undulating dunes. A triptych done in thin applications of oil on paper, a careful look reveals tones of grey, violet and blue in the underpainting, along with little beads or dollops of barely visible pigment. The note of minimalism here is modulated by the work’s lyrical mood.

“Susan Vecsey: Painting” is a powerful show composed of paintings that at first glance look straightforward and simplified but are not that at all. The key arises from the artist’s paint handling. Vecsey does her painting flat on the floor rather than mounted on a wall or easel. The picture plane is frontal, never illusionistic. The dominant theme of color places her works within the Color Field school.

Helen Frankenthaler, an inspiration for the artist, worked quite differently. Frankenthaler’s works feature translucent amorphous effects produced by staining into unprimed canvas, cropped to determine final size. Vecsey starts from a charcoal drawing, plans her intended dimensions from the outset, stretches the canvas to size, and prepares the linen surface with a clear primer. She works in oil, and pours rather than brushes the paint, typically with ten or more applications.

In Untitled (Orange), 2017, the tones and textures of the linen are still evident in some deliberately unpainted areas along the edge, where the weave gives its pebbly quality to the surface, visible through the transparent primer, like shimmering light on the sand. The artist eschews the use of conventional gesso primer purposefully to enable such effects.

Vecsey’s paintings evidence discipline and planning. It is clear that when she begins a composition, she has a definite notion of where it’s going. Vecsey’s studio practice yields decisive results; she builds up her surface gradually through repeated pourings of oil paint, so thinned with turpentine that the liquid is like watercolor. Because of this technique, forms practically fuse into one another at the edges. As these layers build up, the paint surface becomes variously textured or smooth and it can become matte, slightly glossy, textured like velvet, chalky like pastels, opaque, or nearly translucent, depending on the handling.

One of the most vivid and compelling statements exemplifying this complexity is Untitled (Hot Orange/Green), 2019, an oil on paper in the south exhibition space. Its prevailing color is a deep peach and the velvety surface reads like a pastel. The golden glow of this work is like powdered sunlight. The layers of paint permit the shifting intensity of the dominant peachy hue by subtle infusions of cadmium yellow, soft yellow greens, viridian and a hint of olive.

The artist has an arsenal of techniques at her disposal to achieve her objectives. Clearly, her training at the New York Studio School, one of the best places to learn traditional painting methods, and from the admired teacher Graham Nickson, has been fruitful.

By doing layer over layer in this manner, hues strengthen, as repeated applications of paint (which essentially is a liquid suspension with powdered pigment), leave behind increasingly rich residues of pure pigment. The effect is a more intense coloration than could be attained by the use of thicker paint. Coming out of a tradition of color-field painting, Vecsey has produced entirely original results.

Vecsey’s career trajectory is atypical. She diverted her early art interests for practical considerations, and after undergraduate study at Barnard, joined an investment banking firm. Successful there, she quietly pursued her art, gaining an MFA, and after working a dozen years in finance, took a year off to focus on her painting. She launched her new career, exhibiting at New York’s Spanierman Gallery with their modern department, which included some significant abstractionists and only a few younger artists.

When Christine Berry and Martha Campbell, formerly of Spanierman, left to start their own gallery, Berry Campbell, they soon arranged to represent Vecsey with several New York exhibitions. Vecsey lives and works in both East Hampton and New York and her work is part of Guild Hall’s permanent collection. The artist had a solo museum exhibition at the Greenville Museum of Art, South Carolina, in 2017. She had a previous solo show at Quogue Gallery in 2014.

Seeing her new exhibition at the Quogue Gallery, where the artist shows regularly on Long Island, is a real treat. The scale of the gallery, its natural light, and high vaulted ceiling, create a wonderful ambience for this particularly well installed, indeed, elegant exhibition. There is something especially appealing, also, about the works being shown in proximity to the beachfront sites with the sun-reflective tonality of the Long Island light which inspired them.

In addition to the paintings on linen Vecsey is known for, the exhibition weaves oil paintings on paper and a body of collaged works that make use of the same poured paint layers and subject matter as her paintings. For her collages, Susan Vecsey works with cut pieces of linen—rather than traditional cut paper—which are adhered to a linen wrapped board. The compositions are tighter than her paintings with elements pronounced by edges both soft and textural, made from frayed linen.

A striking grouping of these collages is concentrated in the north gallery. They are easily distinguished by their texture and compositions, which are closely linked with elements standing out as distinct aligned fields. The soft edges, however, here done with frayed linen, are a consistent feature of Vecsey’s aesthetic. That aspect, plus the color, and the compositional arrangements, tightly tie the collages to Vecsey’s oil paintings.

In the collage Untitled (Orange/Blue), 2019, there is no ambiguity about the suggestion of the beachfront: the shapes for sand and water are done in different tones of blue, and the sky is orange. The horizon is emphasized by a second orange band of torn linen. As an abstract arrangement, the forms are perfectly balanced, and the linen shapes, especially their irregular edges, add tactile interest. Like her other works, truth to materials and the artist’s appreciation of their beauty is palpable to the viewer.

Vecsey’s paintings relay how ever-changing light and atmosphere is reflected in water as experienced in The Hamptons. Big Waves at Georgica Beach, East Hampton, 2012, a diptych in the south gallery space, especially has this quality. It is fascinating to see the artist’s control here, to suggest the breaking of the waves by poured paint alone instead of brushwork. Like Frankenthaler, Vescey explores how landscape and abstraction can combine.

Though Vecsey’s works in many cases were inspired by locations in East Hampton or Springs, NY, the emphasis and aesthetic context is abstract painting, she explained. “While I use landscape as a reference or starting point, it’s a vehicle for painting. I don’t consider myself a landscape painter,” the artist wrote in an email exchange.

It is particularly refreshing to see Susan Vecsey’s art in “the country.” The intellectual lift and aesthetic engagement sets the experience apart when her paintings are presented here, in a way that’s different from her exhibitions in “the city” where she shows with Berry Campbell in Chelsea. The East End art tradition, which has produced first, second, and third generation Abstract Expressionists, is very much enriched by the presence of Susan Vecsey, who has extended the Color Field context into our time with her innovative methods, confident grace in manner, and sure sense of color.

Quogue Gallery proves to be a great place to see such wonderful art, and the Vecsey show is a gem. It’s like a visit to the beach, probably your favorite beach, every summer and in every type of light.