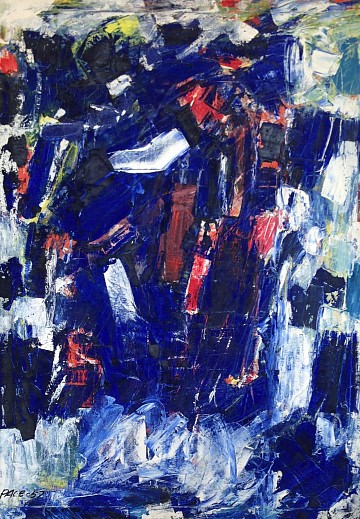 Berry Campbell is pleased to announce the exclusive representation of the estate of Stephen Pace (1918-2010), an artist whose career spanned the last half of the twentieth century.  His oeuvre adds to the gallery’s growing presence as a showcase for the work of established and mid-career artists who carry on the modernist tradition.  Edward Avedisian, Walter Darby Bannard, John Goodyear, Gertrude Greene, Balcomb Greene, Raymond Hendler, William Perehudoff, Edwin Ruda, and Albert Stadler are among other artists represented by the gallery. Berry Campbell’s first exhibition of Pace’s art, featuring abstract expressionist paintings from the 1950s, will open on October 16, 2014.

Pace is known for two bodies of work.  In the 1950s, inspired by his studies with Hans Hofmann his work is characterized by dynamic brush strokes, shifting planes of color, pulsating jagged forms. In a 1959 article from Look magazine, Hofmann said that Pace was one of his most talented pupils. In 1961, the critic, Thomas B. Hess, called Pace a “brilliant member of the second generation of New York School painters that burst on the scene, in the early 1950s, fully made, as if from the forehead of the Statue of Liberty.” In the period that followed, Pace returned to figuration, drawing inspiration primarily from his surroundings in rural Pennsylvania and the coastal town of Stonington, Maine, where he purchased a home.  While using a reductive style similar of that of his friend Milton Avery—and recalling Matisse and Bonnard—Pace employed a broad, gestural brushwork of his own.  His exuberant works, at times drawing on his early memories, express his openness to the world around him.

Pace was born in Charleston, Missouri, and spent his youth in Indiana, where he began to draw.  He received his first training in his teens from a W.P.A. painter. During World War II, he served in the army, creating views of combat and local scenery and designing posters.  He became a frequent visitor to the home of Gertrude Stein while on active duty in Paris.  After the war, he studied on the G.I. Bill at the Institute of Fine Art in San Miguel Allende, Mexico, where he befriended Milton Avery, developing a lifelong friendship.  Settling in New York, Pace studied at the Art Students League under Cameron Booth and Morris Kantor and at Hans Hofmann’s school.  Over the course of his career, he taught art at many institutions, including American University, Bard College, Pratt Institute, University of California, Berkeley, and Washington University. Throughout his career, numerous solo exhibitions of his work were held at museums and galleries.  He took part in historic exhibitions at the Stable and Tanager galleries and in important group shows, including annuals at the Carnegie Institute, the Corcoran Gallery of Art, the Museum of Modern Art, and the Whitney Museum.