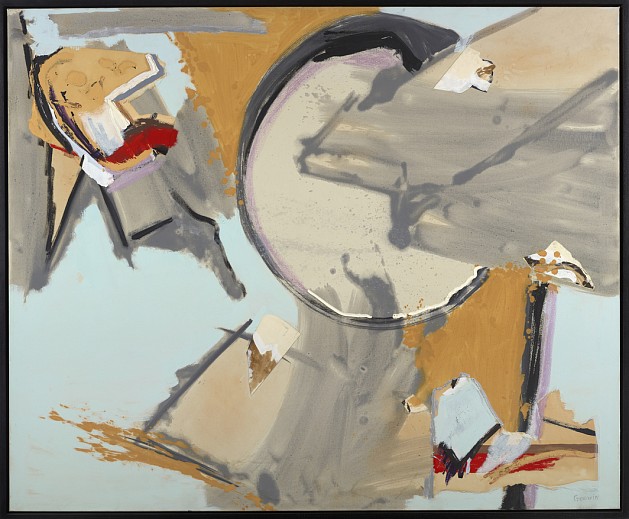 That history has so often obscured and overwritten the creative and intellectual output of women is by now a very well-known observation that, nevertheless, continues to sting. “The men simply said, ‘Women can’t paint,’” recalls Judith Godwin, who began her artistic career in the 1950s in New York—Abstract Expressionism’s heyday—alongside contemporaries including Helen Frankenthaler and Grace Hartigan. The men, simply put, were wrong. This exhibition of Godwin’s paintings across the last half-century situates the artist’s early works alongside later pieces, demonstrating her consistent penchant for experimenting with figure, ground, and color, as well as her persistent dedication to playfulness.

Large canvases such as Epic 2, 1959, bear the expressive, gestural mark-making favored by Franz Kline, with jagged black and white forms thrust against swaths of pale pink. The work’s sweeping strokes and angular composition reflect the edict to “paint as strongly, as violently as the men did.” And yet, within these constraints, her paintings are suffused with stealthier details and techniques that deflate some of AbEx’s machismo—take Epic 2’s chartreuse moments, lightly rubbed on, which look more sprayed than brushed. Similarly, in No. 10, 1958, patches of yellow and purple emerge from softened planes of brown and black, which are foregrounded by dark, vertical drips. Here, Godwin’s subtle approach runs counter to the career-making styles of her peers.

Later paintings from the 1980s and 1990s incorporate mesmerizing patches of metallic paint (Monolith, 1987); are rendered in lurid blues, reds, and violets (Flux, 1982); or continue the staining process and incorporate collage (Orbit, 1993–94). In Gentle Giant, 1998, washes of jade and robin’s-egg blue are layered to create radial shapes of watery color that interact with small areas of black impasto and weeping ecru. These exuberant techniques, culled and spliced, tested and tightened, demonstrate Godwin’s innovative and complex style—one that eschews extreme force in favor of unabashed exquisiteness.