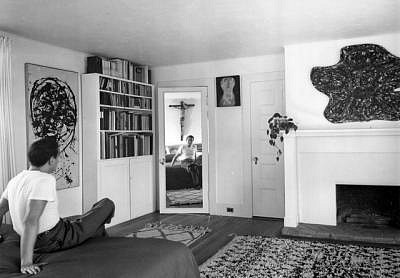 Alfonso Ossorio: A Personal Perspective on His Art and Influence

What made Mike Solomon’s talk about Alfonso Ossorio and the Creeks so captivating was that, as he put it, “It is a personal as well as a cultural history.” An overflow audience packed the Baldwin Family Lecture Room at the East Hampton Library to hear Mr. Solomon, an artist and founding director of the Ossorio Foundation, discuss Ossorio’s art, his generosity, and his influence in the art world of the 1950s and beyond.

The Solomon family — Syd, an important abstract painter, his wife, Annie, and their two children, Mike and Michele — lived at the Creeks, Ossorio’s 57-acre estate on Georgica Pond in East Hampton, for three months in 1959. Thirty years later, Mike returned to East Hampton with his wife and 2-year-old son to work as Ossorio’s studio assistant. After the artist’s death a year later, he became the director of the foundation established by Ted Dragon, Ossorio’s life partner and heir.

Ossorio came from a wealthy Philippine family. His father, a banker by trade, created modern sugar milling, and both Domino and Jack Frost depended on his operation for their processed sugar. He was also prescient, and in anticipation of World War II he moved his family to the United States in 1930, when Ossorio was 14. Alfonso was naturalized three years later.

While still a teenager, he not only began to make art seriously, studying wood engraving with Eric Gill in England, he also began collecting the work of Gill and other members of the Arts and Crafts movement in England.

“It was such an eminent collection that when he was a freshman at Harvard in 1934, the curator of the Fogg Museum asked if he could present an exhibition of etchings from Ossorio’s holdings,” said Mr. Solomon. “That was the beginning of his generosity with culture.”

That generosity continued throughout Ossorio’s life. Mr. Solomon made the point that he was an artist-collector who was able to buy works he wanted to study. Moreover, he had no shame about borrowing techniques and ideas from people he admired, foremost among whom was Jackson Pollock.

He bought Pollock’s “No. 5, 1948” from Betty Parsons in 1949. When he discovered that a chip of paint had come off the canvas, he called the artist, who said he should bring the painting to East Hampton so he could fix it. “The rest is history,” said Mr. Solomon.

“Ossorio said Pollock was carrying on in the tradition that interested him,” said Mr. Solomon, “and in a way had bypassed the Renaissance and gone back to a much earlier period in which ideas were more important than form.”

Another influence was Clyfford Still. “Still’s work was different from much of the other art Alfonso liked,” said Mr. Solomon, “but it was obsessive and rigorous. He owned a couple of major Clyfford Still paintings, and the impasto in some of them influenced Alfonso to start using thicker paint. When he did, he started sticking things in it.”

Ossorio first bought Jean Dubuffet’s paintings in 1947, and the artists became friends in 1949. Dubuffet was a collector as well as an artist, and he had amassed more than 700 pieces of art brut, or outsider art. Dubuffet’s holdings were exhibited on a rotating basis at the Creeks from 1952 to 1962, and their influence can be seen in Ossorio’s work.

Mr. Solomon noted how important it was to Ossorio that his collection be accessible. “He had party after party after party. The whole art world knew what was being shown at the Creeks. The directors and curators of the major museums went there for dinner parties. It wasn’t simply a collection in a private home, it was really very public.”

“The vision of it all and how it was mixed together literally changed the art world. When I was a child, every summer there was a big party for the community, and I remember Lisa de Kooning and I running through all those rooms looking at all the art.”

At the same time, being known as a collector of art to some extent overshadowed his reputation as an artist, according to Mr. Solomon. “I had a great time setting up the foundation, documenting everything Alfonso did. We changed the viewpoint from him as collector to him as an artist by inviting scholars to come in and study his work. There were a lot of discoveries we made going through the inventory.”

The Creeks had a cultural history that predated Ossorio. Albert and Adele Herter, who built the house in 1899 and occupied it until the Hurricane of 1938 flooded the pond and house, counted among their friends William Merritt Chase and Thomas and Mary Nimmo Moran. Isadora Duncan took their gondola onto Georgica Pond, and Caruso sang in the music room.

The parade of cultural notables continued throughout Ossorio’s time there, with Jasper Johns, Louise Nevelson, Claes Oldenburg, Andy Warhol, Marcel Duchamp, and Mark Rothko among the celebrated artists and Clement Greenberg, Harold Rosenberg, and Tom Hess among the critics.

The Creeks became famous, and magazines started covering it. While it was austere in the beginning, “it became less so over the years as bric-a-brac, objects, and more and more elaborate displays started to explode and expand and bubble. Every single room was full of stuff, and I can tell you, it was quite an ordeal to unstuff the stuff that was there.”

Mr. Solomon stressed that the Hamptons art community would not be the way it is without “Alfonso’s push, and how he made everybody comfortable, how he gave to everybody, and how he educated people in things they didn’t know about.”

With John Little and Elizabeth Parker, Ossorio opened the artist-run Signa Gallery on Newtown Lane in 1957. “It was the most cutting-edge gallery on the planet,” said Mr. Solomon. “It had all the artists from the New York School, all the artists from Europe, even abstract artists from Japan. In so many ways, Alfonso provided the fuel for the flourishing of the artistic community here.”

Mr. Solomon, who grew up between East Hampton and Sarasota, Fla., now divides his time between studios on the North Fork and in Sarasota. An exhibition of his paintings and works on paper is on view at the library through Oct. 12.