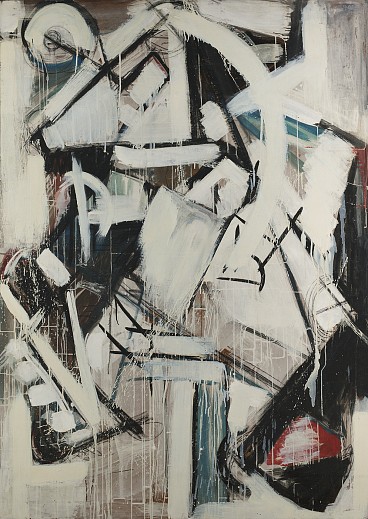 The State of Art: Ground Zero Looks Back at 2 Decades of Visual Art

Visual art has only been part of Ground Zero since March. But I’d been writing about art in the Journal Star, primarily on Sundays well before Ground Zero came into being. So it’s appropriate to take a GZ 20th look back at some of the most memorable art shows of the last two decades.

And I’m cheating by a couple years in order to include the most prominent piece of public art to come to Lincoln in the last quarter century.

This list of 20 Includes exhibitions in Lincoln, Omaha, Des Moines, Los Angeles, Washington, D.C., Philadelphia and New York. I saw the latter three when I was one of 12 American fellows in the International Arts Journalism Institute in Visual Art in 2009.

The list is presented in alphabetical order by artist’s name or exhibition title for multiple artist shows.

Visual artist Anthony Hawley and violinist Rebecca Fischer are The Afield, a collaborative, husband-and-wife duo who presented three 45-minute performances over a month at Fiendish Plots. Surrounded by Hawley’s artwork on the gallery walls, the performances combined Fischer’s violin and singing — and in the second performance, singing from her sister, mezzo-soprano Abigail Fischer — with videos and overhead-projected images manipulated by Hawley. Those combinations explored the nature of language and change and the interaction of sound and text.

Matthew Barney's cycle of five films and the exhibition of the sculptures, drawings and photographs he made in conjunction with them was the talk of the art world in late 2002 and early 2003 when they were exhibited in Europe and at New York's Guggenheim Museum, where I traveled to see all five movies in one day. In fall 2003, "The Cremaster Cycle" films were shown at the Ross Media Arts Center, making Lincoln one of the smallest cities where they were shown. Barney's film are a self-enclosed aesthetic system, a collection of images and ideas that are so uniquely crafted that they seem to be sealed hermetically from outside influences and interpretations.

The first Lincoln exhibition by Cuban-born, Los Angeles-based artist Enrique Martinez Celaya was a collection of paintings that previously had not been shown together. The black paintings that contain trees, boats and sketchy outlines of figures came together to create a sense of contemplation and self-examination. The show marked the beginning of a collaboration between Martinez Celaya and the University of Nebraska-Lincoln that saw more exhibitions, the printing of Celaya’s books by the Nebraska Press and his 2007 appointment as a Visiting Presidential Professor.

A career retrospective spanning 25 years of work by concept-based artist Dashper, “Midwestern Unlike You and Me” was a multimedia exhibition that included everything from a tiny drum kit to vinyl records, video loops and a recorded buzz to fabricated paintings, drum heads, art magazine advertisements and even the artist's Curriculum Vitae.

Dashper, who died in 2009, was one of New Zealand’s most prominent contemporary artists, worked more with ideas than he does with objects Everything in "Midwestern Unlike You and Me" was mechanically created, and many of them are common things given new meaning in the art world.

These exhibitions demonstrated the ongoing importance and relevance of Duchamp. The first used more than 100 objects, primarily photographs, to emphasize Duchamp's illusive nature and the autobiographical nature of his art. The second illuminated the origins, construction and meaning of his still-controversial final piece.

Lincoln native Friedman was living and working in New York when he got a summer retrospective of his entertaining, provocative work at the museum he grew up visiting. Friedman’s practice includes photography, painting, sculpture, video and performance art. But it all revolves around humor, a critique of the art world and society and Charley. Among the objects in the show: an egg sculpture that covered a wall, a giant latch-hooked globe and cutout figures based on Miro paintings. Friedman now again lives in Lincoln and has had several recent area exhibitions that could have made this list.

The first U.S. retrospective of the work of Graham, a pioneer in conceptual, video and performance art and a maker of site-specific pieces was a fascinating funhouse of difficult art that included a jumble of rooms of mirrored trickery, old movies, photographs and conceptual art. It sticks in my mind for another reason: Graham and I had a rather boisterous discussion of the merits of Sonic Youth’s most recent album during the critic’s preview for the exhibition.

Holly Hughes, “Preaching to the Perverted,” The Loft, 2001

Performance artist Hughes, one of the infamous NEA Four who were denied individual artist grants in 1990, showed up in an Easter Bunny costume, turned the Supreme Court justices into little rubber ducks and had the audience doubled up with laughter with her pointed civics lesson that, from what I’ve seen, was the best performance art performance in Lincoln ever — topping that of her fellow NEA Four member Karen Finley a few years earlier at the Lied Center for Performing Arts.

For this stunning exhibition at Omaha's Bemis Center for Contemporary Arts, Lincoln landscape master, Jacobshagen did a painting for every day of 2010, all on 3.5-inch by 5-inch pieces of copper. The little landscapes were then hung edge-to-edge chronologically around the gallery, creating a horizon-like line and becoming a single work made of 365 pieces. An impressive undertaking perfectly executed, "A Golden Year," unfortunately in my view, was broken up for sale rather than preserved as one work. On the plus side, one of the pieces now hangs in my home.

Studio quiltmaker James presented a striking exhibition of 14 quilts — powerful abstract pieces that evoked nature and movement, rigidity and order, and introspection and reflection. His work was given even greater resonance as the quilts reflected his last five years with his wife, Judith, who had Alzheimer’s Disease.

Art world luminary Klaus Kertess got to do only one major show during his brief stint as Joslyn's adjunct curator of contemporary art. But it was a doozy, bringing together paintings by five important contemporary artists loosely united by their use of imagination, myth and allegory.

There were multiple Sheldon shows drawn from its collection that I considered for this list. I ended up choosing the one that is most in my wheelhouse — "Now’s The Time,” an exhibition of Sheldon’s abstract expressionist works conceived by director and chief curator Wally Mason after “Yellow Band,” the museum’s Mark Rothko masterwork was exhibited in an AE survey in London and Bilbao, Spain.

The most striking solo museum show I saw in 2010 was O'Neil's apocalypse in graphite on giant sheets of paper. The Omaha native, who now lives in Houston, culled the dozen huge drawings in the show from 1,200 pieces of all sizes from her seven-year series to tell a non-narrative story of isolated male figures — "everyday Nebraskans" is how she described them to me — in a world falling apart. Technically impressive, visually striking and thematically engrossing, the show was brilliant.

The 22-foot-tall sculpture of a pocket notebook torn in half with loose pages flying in the wind became a Lincoln landmark on the September day it was unveiled at the corner of 12th and Q streets. One of the best monumental pieces from Oldenburg, who rose to fame as a pop artist in the '60s, and his wife, van Bruggen, “Torn Notebook” incorporates both of their handwriting, her observations of Nebraska and even the route of the Platte River — it’s the tear in the notebook.

I got to spend an afternoon with pioneering feminist artist Schapiro in 2003, talking with her about her career, her teaching and encouragement of female artists, “Womanhouse,” the collective she ran with Judy Chicago and the lack of value placed on traditionally female art forms, like quilting. That conversation led to a friendship that continued until her 2015 death. Shapiro had been in Lincoln to speak at a conference.

In September 2015, Francisco Souto began a series of drawings about his native land, Venezuela, and the impact of the current economic and political upheaval on its people. The result, three, large, panoramic drawings and 20 smaller pieces with drawings set inside circles, was the most powerful and important series of work to come out of Nebraska in decades. A master with a pencil, Souto’s highly detailed drawings are technically impressive and emotionally resonant with their images of protesters confronting the military and hungry children sharing bread. Full disclosure — I collaborated with Souto throughout the year he worked on the drawings, visiting his studio to discuss the work in progress.

With “Stories of Home,” the Lincoln Arts Council teamed with internationally recognized artist Pepon Osorio to create an innovative public art project that is unlike any that I know about. Twelve local artists were paired with families and then told their version of the family’s story in art that fit in a good-sized box. I’ve seen about half the “Stories of Home” pieces in the environments in which they were intended to be shown — living rooms, the Journal Star newsroom, etc. — and whether or not I liked the work, I found each to be effective in communicating the basic ideas of the project: telling the stories while providing an encounter with art in a nonart environment.

This exhibition by Omaha native Ware was a “process” show. That is, it tried to show how Ware creates his acclaimed comic art as well as exhibiting work that relates directly to Nebraska. It succeeded on that level, but also worked to bring comics into a high-art context. And the publication in lieu of a catalog was a comic book that has become a collector’s item.

This career-spanning exhibition of the work of pop art master Warhol emphasized his disaster paintings, unearthing the sadness and deep empathy in much of his work while, with their scale making a connection to abstract expressionism and painting that had come before his groundbreaking '60s work. The show made me re-evaluate Warhol and move him up with Jackson Pollock, Pablo Picasso and Duchamp as one of the most important artists of the 20th century.

Zhu's spare exhibition of five objects was visually striking, intellectually stimulating and the best contemporary art show in Lincoln in 2009. Zhu captured the eye with a sprawling, topographical floor piece, a ball of letters and a springy autobiographical sculpture, and her use of text and commentary on American and Chinese cultures engaged the mind. Zhu, who now lives and works in Omaha, has had at least a half-dozen equally impressive exhibitions and installations in the area in the decade since “In Theory,” each which could have made this list.