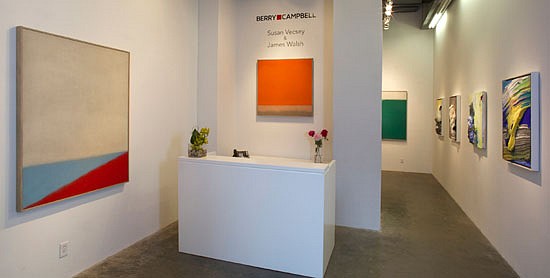 There remains a circle of modernists working in New York who trace their roots back to postwar abstraction on Tenth Street and consider themselves to be working with its fundamental concerns. Modernism, it turns out, may be inherently revivalist, and thus a form of permaculture. The problem from the beginning was to look back in order to find a way forward. As Walter Darby Bannard noted, “Any art that is truly radical must also be in some way conservative.” [1]

The newly arrived Berry Campbell Gallery has taken an interest in such work, and is currently showing James Walsh and Susan Vecsey. It’s too soon to call Walsh a senior member of the circle with lions like Bannard and Larry Poons still making beautiful paintings, but he’s been involved and productive within it since the 1980s. Vecsey is younger, but no less invested in Color Field abstraction, though she comes to it by way of the Tonalist landscape.

Walsh’s paintings are smallish by the standards of modernism, but the containment showcases a range of application from thin stains to eight-inch-thick crests of acrylics. Over the years his palette has moved from smoky and dour to cheerful, even tart, and his painterly command, judgment and taste have become exceptionally refined. Somehow the paint sloshes over the canvases without looking incidental. They are as orderly and yet unpredictable as the sea.

Case in point is his 2002 Turn of Color, just 18 inches high but seven thick. The berm of paint on it is built from slathered layers of pure yellow, royal purple, and a splat of iridescent copper. But Walsh folds a cream color around so that it dominates the pile, and tops it with a gray dollop, forming an organic symmetry that pulls the canvas together. It is as if a Georgia O’Keefe flower study was given the dimensionality and assertiveness of a John Chamberlain sculpture.

Among the recent works, Greenscape (2014) is especially forceful, with a mighty left-to-right sweep of paint that builds to a wave, leaving behind it a weightless slick of aqua, lime and ocher. A resinous green crackle has formed over the lower half, and with blue and white smears above, it alludes to landscape, but volume and gesture tow it back into the objective physicality of paint.

Susan Vecsey provides a restrained counterpoint. I had wondered why no one had yet picked up on Helen Lundeberg’s sunlit minimalism and run with it — perhaps it had to wait for another landscape painter like Vecsey to become interested in geometric abstraction. In any case we need wait no longer. This new series has her making satisfying pictures out of three or four colors, modulated with the surety of someone who has painted her share of skies. In Untitled (Gray/Blue Vertical) (2014) a sumptuous azure block sits atop a field divided by an S-curve into a lighter and a darker gray. Nothing else is needed.

It may sound strange to say so, and reproductions won’t back me up, but this is virtuoso painting. With the right viscosity of turpentine, oils bleed into one another in a way that leaves little branch-like shapes at the edges, such as those in Untitled (Gray Waves) (2014). The burlap-colored warmth of the sized linen is allowed to show through from behind the application of cool grays, producing a rich atmosphere. This all takes enormous control. If anything, Vecsey’s new paintings feel a little too premeditated, but she’s in an early stage of her abstract oeuvre and more chromatically pumped-up pieces like Untitled (Blue/Red) (2014) indicate that some unruliness is on its way in. Thus the constant revival continues.