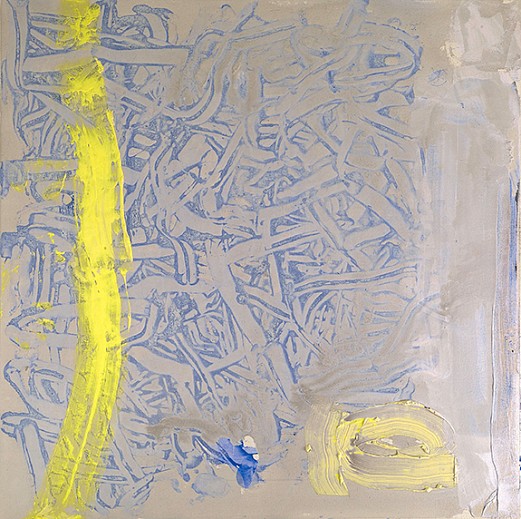 Berry Campbell is Pleased to Announce its Representation of Frank Wimberley

Over the course of a career that has spanned more than fifty years, Frank Wimberley has felt abstract painting to be a continuous adventure. Now 92, the artist is a well-known presence in the art scene on the East End of Long Island and an important figure in African American art since the 1960s. Acclaimed for his dynamic, multi-layered, and sophisticated paintings, Wimberley is among the leading contemporary artists to continue in the Abstract Expressionist tradition. What has always excited him is to take the theme or feeling from the very first stroke he lays down and follow it to its particular conclusion, "very much like creating the controlled accident." His improvisational method is akin to jazz, an important part of his life and a theme in his art. Despite the spontaneity of his process, Wimberley makes each decision deliberately, respectful of what emerges and where it is going; he enjoys the surprise of arriving at definitions that seem to come to life on their own. Similarly, his works engage the viewer in their strong physicality and unpredictability as well as in their insights into the ways that pictorial experiences are perceived and understood.

While growing up in the New Jersey suburbs, Wimberley was drawn to art and music. His interests were supported by his parents. His mother, a ceramicist and pianist, involved him in her work, and allowed him to pursue his own glazing experiments. His father gave him a trumpet that he used in "a band of sorts." In 1945, after serving in the army, he entered Howard University, Washington, D.C., where he studied painting with three of the most influential African American artists of the mid-twentieth century: James Amos Porter, James Lesesne Wells, and Loïs Mailou Jones. Porter, also an art historian, wrote the first critical analysis of African American artists and their work. Wells, primarily a graphic artist, was active in the Harlem Renaissance. Jones, a Paris-trained artist influenced by the Harlem Renaissance, was a textile designer and illustrator as well as a painter. In college, Wimberley also became immersed in jazz, listening to it and playing it himself. This later led to long friendships with legendary jazz musicians, Miles Davis, Ron Carter, and Wayne Shorter. After two years at Howard, Wimberley decided to move on, feeling that he had learned the basics and was "ready to teach himself."