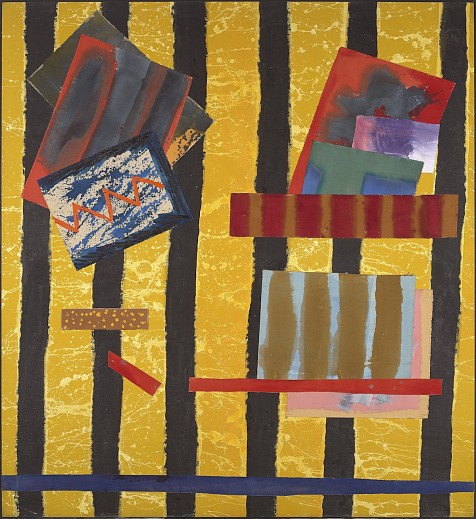 Modernist with a vengeance, the paintings in Ann Purcell’s “Caravan Series” range from five-to-six-feet-high or -wide, an expanse an energetic Abstract Expressionist could cover with one step and a sweeping arm.

Yet Purcell, who was born in Washington, D.C., in 1941, was too young to be part of the New York School artists’ postwar pas de deux with their canvases. Rather than de Kooning’s voluptuous strokes or Pollock’s animated splatters, Purcell’s early-1980s imagery has a fractured grace that reverberates with that era’s garish excesses. It was a time not unlike our own—Ronald Reagan was in the White House and the boorish extravagances of Wall Street’s budding Masters of the Universe were chalked up to its being “Morning in America,” after the drip-drip-drip revelations of Watergate in the first half of the ’70s and Jimmy Carter’s dithering in the second.

But while America was caught up in the Yuppies’ conspicuous consumption, Purcell was pursuing a different dream, studying at D.C.’s Corcoran School of Art and Design with Gene Davis, a member of the Washington Color School group of painters, who rose to prominence in the late 1950s. Davis worked in chromatic stripe motifs, and Purcell has reminisced about exploring D.C.’s museums with him and comparing paintings from different historical periods. In the press release for her current show at Berry Campbell gallery, Purcell states, “One of the things that is so wonderful about art is that art history is an endless resource—one cannot consume it all.” In a canvas such as Gypsy Wind (1983), various art epochs collide: rough rectangles of brightly painted canvas collaged onto the larger composition recall Matisse’s vibrant cut-paper works of the 1940s; a bit of dotted pattern brings to mind Robert Motherwell’s 1943 cut-and-painted-paper collage, Pancho Villa, Dead and Alive; and the overall design, with its top-heavy wedge cantilevered over a teetering vertical, channels David Smith’s gamboling painted-metal sculptures. Yet the exuberant hurly-burly of Purcell’s slathered brushstrokes, mashed-up colors, and overlapping surfaces belies her disciplined methods and sensitive attention to detail, a sophisticated approach that pushes these works past their historical influences of 30-some years ago and keeps them looking fresh today.

The midnight-dark background of Balthazar’s Gifts (1983) is crosshatched with broad purple strokes edged with a delicate luminescence, like dancers backlit by moonlight. In the bold Calliope (1981), the background of alternating black and yellow bars is overlaid with smaller off-kilter canvas rectangles, some with colorful stripes emulating the differing pipe sizes and tones of the title’s musical instrument. But there is also the Greek goddess of that name, muse to poets and mother of the musical master Orpheus and his brother, Linus, the inventor of rhythm—and indeed, whitish splatters on the yellow ground, along with dots and zigzags on the collage shards, transform cacophony into harmony with the aplomb of a John Cage concert.

If the moss-colored thrusts and gray parries in 1979’s Sassy #2 seem simultaneously blunt and tentative, by 1981’s Séance, Purcell was forging unison from fragments. In this six-foot-tall canvas, bright drips cascade from the top of the black ground and hopscotch around painted collage squares like a waterfall navigating boulders. Near the bottom, swirling golden dribbles are confined to a pasted-down purple rectangle, a moment of coiled energy that echoes the larger composition but also implies its own temporal space. Two other small swatches—broadly swiped with orange—tumble like snapshots of forgotten sunsets, a notion perhaps influenced by a title that calls to mind the search for a lost loved one.

At times, the smaller geometries in Purcell’s compositions feel hacked out of larger canvases, as if she wasn’t satisfied until each component found its place. In other instances, all elements feel precisely located—portals into different spatial realms. In Race Point (1982), a blue vertical strut, smudged with darkness like lowering weather, bisects a red slab that angles like a massive doorway. This creates the vista of art-historical glimpses—the fractures of Cubism, the existential desperation of Ab-Ex, the formal élan of the Washington Color School of Purcell’s hometown—that gives her work such an expansive base. One small piece of collage, burnished orange blots on a sepia background floating near the upper left, evokes a sense of nostalgia, like a tattered postcard from some Luna Park of Modernism—a site in the mind that’s been around for a long time but can still bring the thrills.