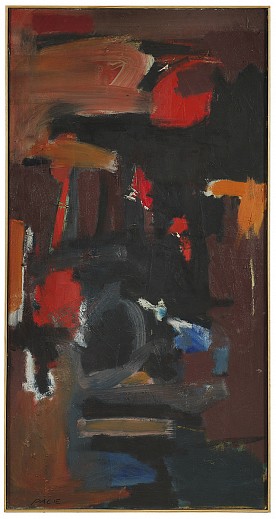 Masters of Expressionism in Postwar America

NEW YORK, NEW YORK, April 24, 2014– Berry Campbell is pleased to announce Masters of Expressionism in Postwar America, an exhibition featuring painting by thirteen artists, working in the modes of Abstract Expressionism and Color Field Painting, whose careers developed in the dynamic and freeing milieu of American art after World War II. The exhibition gives recognition to the heightened interest today in this art for its strength and transcendence.

The show includes two watercolors by the German-born artist Hans Hofmann, among the most influential art teachers of his era.  His belief that the tensions between form and color were themselves evocative of pictorial space is revealed in these works, from 1942 and 1945, and reflected in that of his many students.

Among them is Stephen Pace, who followed Hofmann in creating volumes through dynamic planes of color.  His two oils and one watercolor in the exhibition, all early 1950s, evoke a classical balance of tension and repose.   Other Hofmann students include Giorgio Cavallon, who is represented by a canvas in which areas of color seem absorbed by and emergent from an atmosphere of shimmering diaphanous light, and John Little, whose use of broad, muscular strokes that activate his surfaces are suggestive of the art of Jackson Pollock and Lee Krasner, with whom he was closely connected after moving to East Hampton, New York, in the late 1940s.

Many of the artists in the exhibition were part of the dawning of Abstract Expressionism, contributing to a time when a gestural technique signaled liberation from past formulas and resonated with an era that had experienced the atomic bomb.  The only female artist represented in the Museum of Modern Art’s legendary The New American Painting exhibition that toured Europe in the 1950s, Grace Hartigan sought to express the spirit of her age through her emphasis on the creative process.  Closely associated with Pollock and Krasner, James Brooks evolved a style of fluidity and surface tactility, calling to mind an alternative naturalism in his loosely referential images. Raymond Hendler, who started his career as an Abstract Expressionist in Paris, was a friend of de Kooning, Franz Kline, and Philip Guston. His early style of overall tightly wound linear webs, demonstrated in two works in the show, are revelatory of artists’ awakened desire to seek an understanding of the world through a process of direct transcription.  Norman Kanter similarly created exuberant, gestural works, deriving inspiration from the range of opportunities made possible by Abstract Expressionism.

In the exploration of new mediums, generated by Abstract Expressionism and Color Field Painting, several of the artists in the exhibition explored a realm of the spiritual and sought to express emotive intensities.  Throughout his art, Norman Bluhm searched for personal realization through dripping, staining, and a gestural method as seen in his oil of 1964 in the exhibition.  One of the most prominent artists to emerge in the 1950s, San Francisco painter Sam Francis created works that have been described as “elegantly explosive.” His use of active staining and flung paint in a work in acrylic and gouache of 1973 results in a radiant and open image, demonstrating the influence on Francis of the art of Japan.  Similarly Paul Jenkins was committed to a tactile, experimental method, in which undulating poured paint creates seemingly liquefied, almost molten surfaces.

A few of the artists in the exhibition incorporated expressive methods into established aesthetic trajectories. An early American abstractionist, Gertrude Greene sought a unity between formal geometry and painterly abstraction during the last phase of her career, an intermingling that may be seen in Triangulation (ca. 1951).  The only son of the Surrealist painter, Max Ernst, Jimmy Ernst united abstraction and representation and formal invention and mythic imagery, creating dynamic surfaces filled with geometric armatures often evoking medieval stained glass. John Ferren, who grew up in San Francisco and lived for a long period of time in Europe, eventually adopted a style of bold brushwork and vivid color. A friend of early abstractionists, including Adolph Gottlieb, Barnett Newman, and Mark Rothko, Theodoros Stamos initially created biomorphic Surrealist images, but later shifted to a looser, more painterly style conveying his passion for nature and individual expression.  Named for a Greek island in the Aegean, Stamos’s Infinity Field paintings express the warmth of the sun and the rocky coast through their intense color and irregularly contoured forms.

The opening reception will take place on Thursday, May 1 from 6 to 8 pm.  The exhibition will run through Saturday, May 31.  Berry Campbell is located in the heart of Chelsea at 530 West 24th Street on the ground floor.