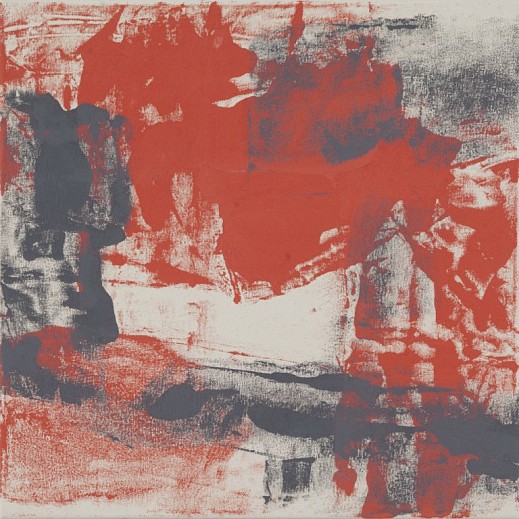 The William H. Hannon Library, and Master of Arts in Yoga Studies at Loyola Marymount University, are pleased to present, Eric Dever: Light, Energy and Matter, an exhibition of 45 paintings which brings the viewer on a journey, similar to the path of the artist himself.

“In the beginning of this decade long process, I worked for 4 years with white paint alone, examining the material properties of paint and support. It wasn’t until I had introduced black that I realized I was working with light itself.” In 2010, Dever began testing a variety of prepared red hues and arrived at Naphthol Scarlet, closest in hue to Vermillion, a 9th century alchemical mixture of sulfur and mercury. Like breaking a long fast, this sudden experience of color was very exciting, the possibilities became exponentially larger and more complex.

This approach embraces Dever’s interest in color’s shifting correspondence with light (white), energy (red), and matter (black). These color phenomena also echo Dever’s studies of material nature, and the gunas, subtle qualities woven together that underlie all of existence as presented in Samkhya philosophy, Patanjali’s Yoga Sutras and the Bhagavad Gita (14.5): “Clarity, passion, dark inertia. These are qualities that originate from nature.”

“Overtime, I began to develop a sense of mixing qualities of light, energy and matter, as one would mix color or hue. Some paintings feel heavy or contained, while others are explosive or very light, though each work is related and part of a whole.” Dever’s paintings are installed introducing a unique graded palette on each of the 3 library exhibition levels, which parallel the activity of learning and enlightenment itself.

About the Yoga Studies Program

The Master of Arts in Yoga Studies at Loyola Marymount University provides deep study of the Yoga tradition from multiple perspectives. The graduate program is designed to help students explore Yoga’s rich history, its relationship to religion and spirituality, and immerse themselves in Yogic philosophy. Students study primary classical texts, learn the Sanskrit language, explore the health benefits of physical practice, and look at the placement of modern Yoga in today’s world. The program meets the needs of Yoga students and teachers who are seeking to enhance their knowledge in both theory and application.