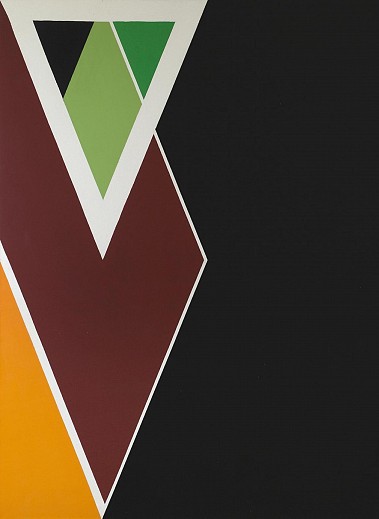 Pedestrians walking by Berry Campbell, site of a new exhibition dedicated to Larry Zox (1937-2006), all have the same reaction.

“You look through the window, and it’s like, ‘Wow!’” says Christine A. Berry, co-owner of the gallery on West 24th Street, in Chelsea. “You’re whacked in the face by bold reds, and next to that, you may see a soft seafoam green. It’s a very powerful show, with bold compositions and beautiful colors.”

The godfather of the Color Field movement, Zox is currently enjoying a revival of sorts, as contemporary artists adopt many of the formal strategies—asymmetric compositions, hard-edged polygons, mathematical precision—that distinguished his work. Zox is best-known for geometric abstractions like Esso Lexington (Diamond Drill) (1968) and Cordova Diamond Drill (1967), both variations on the same diamond-shaped motif.

On view at Berry Campbell are works from every stage of his career, beginning with Banner (1962), a collage with pieces of painted paper stapled on plywood. After this early foray into mixed media, the artist engaged in a bit of misdirection, simulating the look of the earlier work by painting fields of color with jagged, uneven borders. “The paintings from this period are almost trompe l’oeil collages,” says Berry. “They’re all paintings, but they have these ragged, torn-tape edges to them … That’s what sets this exhibition apart. Everyone knows the artist’s geometric, hard-edged pieces, but we are trying to show how he came to hard edges through other techniques.”

For his pictorial innovations, Zox was rewarded with a solo show at the Whitney Museum of American Art in 1973, followed by group show at the newly-opened Hirshhorn Museum and Sculpture Garden in 1974. Beyond his painterly exploits, Zox presided over a clique of artists, jazz musicians, and bikers in downtown New York. The swashbuckling artist frequently sparred with boxers at his studio on 20th Street and later occupied a defunct black smithy in East Hampton, New York, that once belonged to Jackson Pollock.

Later in life, the roguish painter moved away from the hard-edged polygons that defined his career in the 1960s and adopted a brushier, more emotive style in tune with the gestural mark-marking of Abstract Expressionism. In Hayward, made just three years before the painter’s death from cancer in 2006, the painting is striped with fields of color that sag on the right side of the canvas. Gone is the mathematical precision of his earlier work, replaced with an expressive style that speaks to the interior life of the painter.

The artist’s career faltered towards the end of his life, but the market for mid-century abstraction has rebounded in recent years, thanks in part to a new generation of contemporary artists intent on reviving the lost art of color studies.

“Color Field paintings, Abstract Expressionism and Minimalism are hot right now,” says Berry. “People are interested in history and works of art with a bit of a backbone and story behind them. Color Field Painting was very hot in its day, and then it tapered out, but now people are very interested in the style. Everybody does big, bold color—but Larry Zox was one of the first.”