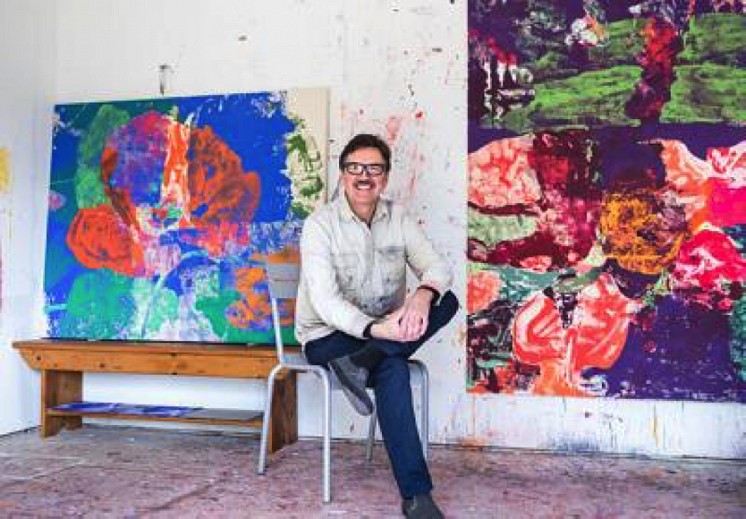 For more than a decade, Eric Dever employed the same idiom in his painting, with a square canvas and a limited palette. It served him well, with many group and solo exhibitions both locally and internationally.

Limiting himself at first to white, for four years, then white and black, for two years, and since then to white, black, and red, he came up with a staggering amount of variety, both in hue and composition. It was an exercise most notable when the works were placed together. Individually, each painting held its own.

Mr. Dever adopted this format when he moved to the South Fork in 2002. It has changed and deepened in the ensuing years, but no one would recognize his latest work as part of it.

The shift began with the square. “Suddenly, I let go of it. I decided I had become too attached to it,” he said in his Water Mill studio on a bright but brisk March day. Moving to a rectangular format loosened up his compositions, he said. “There was no longer a central area of interest, there were multiple areas of concentration.”

More dramatically, however, he rediscovered color — not just one or two, but the entire spectrum. That began a year or so ago as he was recovering from an illness. “The landscape was bleak. I thought everything good that could happen would come from spring.”

Mr. Dever thought about his rose garden, he said, the inspiration for the last paintings in his last series, and how it turned into something beautiful every summer. Looking for similar inspiration, he decided to plant a vegetable-and-flower garden, to help his healing along.

Taking inspiration from his practice of yoga, as he had done with his “Red Black White” series, he told himself that “I need this to happen, but it’s not going to happen with red.” He needed something with less energy and intensity, and made up his mind to work with the colors associated with the Indian and yogic notion of chakras, areas of energy in the body, and to employ the whole spectrum.

Mr. Dever thinks of his previous work with color as relating to gunas, or qualities of nature, with white corresponding to light and clarity, red to passion and energy, and black to matter and inertia. “When I finished with the black and white series and contemplated the next color, I began to understand that by adding red, the divergent interests came together,” he said, and along with that came the realization that he was working with the gunas. “It was a big epiphany.”

The garden he planted included the roses, but he added lilies, nasturtiums, and morning glories. “They’re hearty, unstoppable, and last long into the season. Their colors were so intense, I started taking cues from them.” When the flowers blossomed, he used their colors in his paintings. “At the height of the summer, I used all of it. The apprehension of color stuck with me.”

The artist’s earlier work will be shown this summer at Loyola Marymount University in Los Angeles. It is the first school in the nation to have a graduate program in yoga studies, and the first time his white, red, and black series will be fully explored for its correlations to elements of yoga. “It’s the only venue to date to really present the work in its full context and with that kind of understanding,” he said. “For most people who see it, they say, ‘Red, black, and white, oh, like Philip Guston,’ and they leave it there, no further questions.”

Mr. Dever grew up in California, near the high school that Jackson Pollock and Guston attended. “When I was in high school I knew about them and knew Pollock was a big deal, but when some of my art friends and I went to the Los Angeles County Museum of Art we admired Lee Krasner’s work more,” he recalled. He was also a fan of Willem de Kooning. “Living here on the East End, if you’re an abstract painter, you are living in the shadow of some really big trees.”

A relationship to Krasner’s paintings can be seen in Mr. Dever’s new series, especially, he said, in its earlier works, which are “more overtly floral. I like them, but it was not where I was going to rest.”

Krasner is important to him as someone who “had everything happening in the 20th century telescoped in her work,” from the Surrealists and Cubism of the School of Paris to the gestural abstraction of the New York School. “I found her work to be a wonderful synthesis of art movements.”

His approach can involve taking shapes from one canvas and adding them to another, often through a monoprint process of painting onto a paper, Bubble Wrap, or Plexiglas cutout, and transferring that to a canvas. These repetitions of forms and other planned elements, together with his more gestural painting of the rest of the canvas, creates a charged tension between spontaneity and organization. He said he believed it was one of the ways de Kooning worked, and was also an element in the 1950s paintings of Stuart Davis, which recycled forms from his 1930s work.

The true meaning of Mr. Dever’s new work became apparent the day after Donald Trump was elected president, when he produced a much darker painting than anything that had come before. “It became impossible not to think of ‘days.’ I had been having all of this color experience since June and thinking of chakras, and suddenly I think of this color [a midnight blue]. I wondered, how can I not address this, but how do I not let it affect my other work?’ ”

He decided that giving his paintings dates as titles could allude to the events or circumstances that inspired them. The dark painting became “November 9”; a bright painting inspired by his garden in summer is “July 22,” and a painting with a sea of bold pink swaths is titled “January 21,” the day of the Women’s March on Washington.

“I like the idea of a Book of Days,” Mr. Dever said, “because it reflects not one consistent vision. It allows for intervention, interruption, evolution. I think that’s an honest way of working.”   Mr. Dever will give a gallery talk at the Parrish Art Museum, where a painting of his is on view, on April 21. He is also part of a group show, “East End Collected,” opening at the Southampton Arts