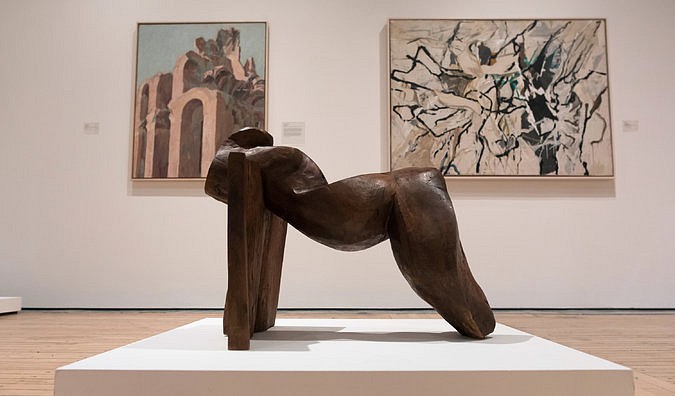 When a call went out online recently for an art world protest strike — “no work, no school, no business” — on Inauguration Day, more than 200 artists, most based in New York, many well known, quickly signed on. In numbers, they represent a mere fraction of the present art world, and there was reason to expect the list would grow. By contrast, in New York in the 1950s, 200 artists pretty much were that world, and one divided into several barely tangent circles.

That era’s cultural geometry has been badly in need of study, and now it’s getting some in a labor-of-love exhibition called “Inventing Downtown: Artist-Run Galleries in New York City, 1952-1965,” at the Grey Art Gallery at New York University. With nearly 230 objects, it’s big and has its share of stars. But it’s not a masterpiece display. It’s something almost better: a view of typical — rather than outstanding — art, of familiar artists looking unfamiliar, and of strangers you’re glad to meet. It looks the way history looks before the various MoMAs get their sanitizing hands on it: funky, diverse, down to earth, with things to teach us now.

By 1952, Abstract Expressionism was the big American deal, the art that won the culture war with Europe. Americans like muscle, ego and size, all of which Ab Ex had. The market likes brands, and will create them where it can, and did so in the case of Ab Ex, which made many people, including the uptown Manhattan dealers who sold it, quite happy.

Not everyone was thrilled. Not all artists were. Some itched to have success as part of the trend but couldn’t quite figure out how. Others were tired of abstraction; they wanted to paint people and nature, tell stories, or try out crazy new forms that merged art and theater. For still others, politics, and art’s expression of it, was of primary concern. The only guaranteed way these artists could achieve their goals was by opening galleries of their own, and they did.

The earliest of these 1950s artist-run galleries were downtown, on or around 10th Street, east of Fourth Avenue, where rents were cheap. The Grey show, organized by Melissa Rachleff, a clinical associate professor at the New York University Steinhardt School of Art, features 14 such spaces, a few of which lasted for years, others for just a few months.

The most stable were the so-called cooperative galleries, or co-ops, established by groups of artists who paid monthly dues to cover rent, pitched in on running the place, and made joint decisions about membership: whom to bring in, and whom to kick out. In return for their commitments, they could, on a rotating schedule, show their art.

The earliest of the three co-ops covered by the show, Tanager Gallery, was also the longest-lived, surviving from 1952 to 1962. And it was the one with the most market-friendly aesthetic, a little something for all tastes. Samples of work by members range from realism (a 1959 double portrait by Alex Katz of his wife, Ada), to semi-abstraction (Lois Dodd’s wonderful 1958 picture of three caramel-colored cows), to the full-on gestural painting of Charles Cajori, Fred Mitchell and Perle Fine.

As is true throughout the show, there are memorable discoveries here. One is a sculpture: a splendid wood figure carving by Mary Frank, suggesting the form of a dancer, which Ms. Frank was. The other find is Jean Follett, whose ghostly assemblage painting, “3 Black Bottles,” is in a world of its own. Tanager’s gestural painters would have fit right in at uptown galleries, and aspired to. But in the 1950s, Ms. Follett, who after early success left New York, was still looking for a receptive place to land.

She found one in 1952 at Hansa Gallery. It was named for Hans Hofmann, a revered teacher who, although himself an abstract painter, encouraged his students to experiment in other styles and media. So did the gallery’s young director, Richard Bellamy, who would later champion Pop and Minimalism. Their venturesome tastes may account for the variety of work in this section of the show, from Jane Wilson’s vivid portrait painting of a fellow artist, Jane Freilicher, to a photograph of an early environment by Allan Kaprow, who paved the way for Conceptualism.

The third co-op, the Brata Gallery, brought some racial and ethnic diversity into the 10th Street picture. Ed Clark, fresh from Paris, was one of the very few African-American artists exhibiting in New York. And he holds the banner of abstraction high here with a picture that’s basically a giant swoosh of pink. (He has a solo show at Tilton Gallery on the Upper East Side through Feb. 18.) Brata also exhibited the Japanese-born Nanae Momiyama — two of her tiny ink paintings are here — and mounted one of the most successful downtown shows of the day in the American solo debut of Yayoi Kusama, whose hypnotic and enveloping paintings caused a sensation.

That was in 1960, by which point other kinds of galleries, alternatives to the alternatives, finding 10th Street too conservative and rejecting the co-op model, had sprouted up downtown. And these spaces, scrappy and scrappily documented, are the most interesting of all.

Reuben Gallery acted a bit like a co-op — it had a steady schedule of shows — but its thinking was loose enough to accommodate Mr. Kaprow’s audience-participation happenings, and the street-junk pageants of Red Grooms. In 1958 Mr. Grooms opened a space of his own, called City Gallery, in his West 24th Street studio. It lasted barely six months but presented a much-talked-about group drawing show. Ms. Rachleff has tracked down more than 20 of the original 45 works, among them a luminous Emily Mason pastel and two fantastical street scenes by Mimi Gross (who would later marry Mr. Grooms). The gifted painter Bob Thompson, dead from drugs at 29, showed here. So did the undersung Robert Beauchamp, and the poet and scholar of African art George Nelson Preston, who has a retrospective at Kenkeleba House in the East Village through Monday.

That project ended when Mr. Grooms had to move, and he started another, the Delancey Street Museum, in a deserted boxing gym on the Lower East Side. There he realized some of his own most ambitious theater pieces, and also presented a solo by the painter Marcia Marcus, now obscure, who has a way-ahead-of-its-time self-portrait at the Grey. Similarly, Judson Gallery, in a basement near Washington Square, is remembered chiefly for Claes Oldenburg’s early, hair-raising performances, but was just as important for introducing painters like Marcus Ratliff and the outstandingly interesting — where can we see more of her? — Martha Edelheit.

And, fleetingly, artist-run galleries popped up way downtown, near the financial district. In the winter of 1960, Yoko Ono opened her studio-loft at 112 Chambers Street to experimental composers like La Monte Young and choreographers like Simone Forti. In 1963 a bunch of Bay Area artists settled, commune-style, in a tenement at 79 Park Place, near City Hall. They lived rough, but the hard-edged paintings produced by Tamara Melcher and Leo Valledor are as neat and clean as can be.

But long before then, downtown had moved uptown. Hansa had done a five-year stint on Central Park South, hoping to attract collectors from the commercial art district nearby. In 1960 a start-up space, Green Gallery, set up shop on 57th Street and projected a downtown ambience, thanks to its quixotic director, Mr. Bellamy. He was a downtown type if ever there was one, as is made clear in Judith E. Stein’s engrossing 2016 biography, but Green Gallery was firmly in the business of doing business. In positioning Pop and Minimalism as the next art success stories, it worked with priorities that the more radical downtown spaces had resisted.

It was those spaces, where downtown existed as a state of mind as much as a place, that held my attention longest. This was partly because some were new to me, but also because their thinking seemed vital in a way that Green Gallery’s did not. March Gallery, on 10th Street, was an example. Run by Boris Lurie, a Holocaust survivor, with his fellow artist Sam Goodman and a poet, Stanley Fisher, it approached art not as an ornament but as an ethical argument, a response to racism and greed. Wordy and space-hogging, their paintings seemed pitched to outshout and outbully consumer culture.

Their populist approach inspired the artist Aldo Tambellini to locate his alternative space, the Center, in the East Village streets, where people would participate in, and contribute to, his art, whether they meant to or not. The same crowdsourced ideal led the artist Phyllis Yampolsky, in 1961, to establish the Hall of Issues, a space at Judson Church where anyone, from community activists to neighborhood kids, could post bulletin-board style comments on matters that concerned them. The space, in place for two years, was a prototype for the “subway therapy” installation of thousands of handwritten sticky notes that covered a wall of the Union Square Station after the 2016 presidential election.

And there’s the Spiral Group, which originated just before the 1963 March on Washington, when several African-American artists — among them Emma Amos, Romare Bearden and Norman Lewis, as well as Hale Woodruff, who taught at New York University — gathered in Greenwich Village to debate the question of whether and how to insert the politics of race into their work. Did doing so misuse art? Did it diminish politics? Was it self-aggrandizing? Self-isolating? Did it do any good?

These questions are all pertinent to artists now, including those who may be considering adding their names to next week’s art strike. The Spiral Group concluded that there was too much at stake for them not to take a stand as artists: Do it, and see what unfolds. So they changed their art and put together a political show. Their example still holds.