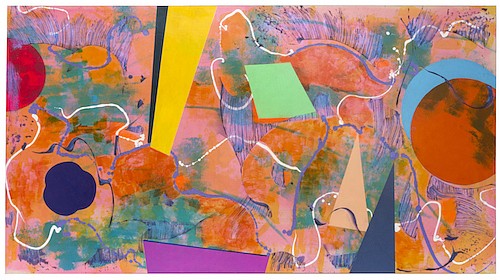 November 1, 2016 - Piri Halasz for From the Mayor's Doorstep

When word broke on Facebook on October 2 that Walter Darby Bannard had died, I received more than the ordinary number of worried or consolatory emails. This was proof, if I needed any, that he was widely known and loved, not only for his fine painting but also for his teaching, for his role as dauntless defender of modernism in print, and for simply being a very nice guy. More

The opening reception on October 13 for “Walter Darby Bannard: Recent Paintings” at Berry Campbell (through November 12) was crowded to the gills...but I've already said that --in my last post, dealing with the social aspects of art-loving....so this post is going to be first, about Bannard the man, and second, about his final statements in painting....

Bannard was born in New Haven. According to the lengthy obituary by William Grimes published in the NY Times on October 9, his father was a railroad manager and the family moved around a good deal as he was growing up.

Still, the artist’s father was also Princeton ‘29 and both he and his bride were socially prominent enough to have their engagement, their wedding and the birth of their twins reported in the society pages of the Times (two of his father’s new postings were also reported in the business pages of the paper).

Young Darby was educated in accordance with this background: at elite Phillips Exeter Academy for prep school and Princeton for college.

At Princeton he majored in philosophy but was more interested in painting. The college in those days had an art history department but was just barely getting into teaching studio art, so Bannard was for all practical purposes self-taught.

He latched onto abstract expressionism early, and acquired two memorable friends who were also students at Princeton: Frank Stella and Michael Fried, the critic and art historian.

Fried seems to have been the one who introduced the other two to Clement Greenberg, but – although Bannard soon developed into a close friend of the older man--his painting initially veered away from abstract expressionism.

Instead, it became a singularly mellow and harmonious brand of minimalism (as opposed to the color-field painting of Kenneth Noland & Morris Louis).

Not till the ‘70s would his style achieve the fluid, graceful whorls of subdued and gel-laden color that signaled his kinship with such Greenbergian masters of this period as Jules Olitski & Larry Poons.

Along the way, Bannard had also matured into a witty and eloquent art critic and commentator, publishing voluminously in Artforum, Art International, Arts Magazine and elsewhere – not least through large numbers of wonderfully colloquial letters to the NY Times.

Nor was he unwilling to stoop to book reviews—when I published “A Memoir of Creativity” in 2009, I sent him a review copy, and he obliged with a sprightly & favorable paragraph or so for amazon.com.

(He didn’t have much use for my theory of multireferential imagery or my brand of national politics, but when discussing my coverage of Greenberg, he did say that “she gives us a more intimate, more insightful and much truer picture of this great and complicated art critic than all three of the recent books on him put together.”)

By the time of this review, I’d been following Bannard’s work – both on canvas and in print – for two or three decades, having become conscious of both in the early 1980s.

At that point, he was still exhibiting at Knoedler’s, and perhaps my first exposure to his painting took place in 1984 in a day that had begun with my attending a symposium at the Whitney where Greenberg was a speaker.

After the symposium was over I approached Greenberg in the lobby of the museum to say hello. He was with a cadre of fellow spirits, and invited me to join them all for lunch.

We went to a Greek place on Lexington Avenue, and afterwards three or four of us strolled west, past Knoedler’s. We went in, to find a show of Bannard’s in residence.

Greenberg decided he wasn’t entirely satisfied with the way that the biggest painting, facing the entrance on the back wall, was hung. He wondered aloud whether it might not look better sideways or upside down.

Two minions at Knoedler’s were only too eager to humor his every whim: they leapt to the task of shifting this huge painting around as they staggered under its weight.

In the end, Greenberg decided that the painting was best the way it had been hung originally, so he and I and whoever else was with us strolled further west, to the New Westbury Hotel, on Madison.

There we stopped for a drink, in the lounge. Greenberg eyed me narrowly. He said (as nearly as I can remember), “Try your hand at negative criticism.” “I’m working on it,” I said, equally narrow-eyed.

Although I’d published a good deal of positive criticism up to that point, and lots of what I thought was purely objective comment, this was the moment when I became a negative as well as a positive critic.

Bannard, of course, was already well into the negative. My favorite piece by him appeared in Arts Magazine sometime in the mid-80s (though I’m not sure of the date, and it doesn't appear to have been anthologized). This piece satirized the typical patron of neo-expressionism as a parvenu pretender to culture. Hilarious!

And I’d already met him through AICA, the International Association of Art Critics, to which we both belonged. I forget the event, but I remember that a group of us had dinner afterwards, and that he’d driven in from his home in Princeton—parking his car, as he said he often did, in the parking garage of the Metropolitan Museum.

The next time I became aware of him was in the 1990s, by which time he had relocated to teach at the University of Miami. I’m not sure quite what I was hearing about him, or how I became more aware of him.

It may have been through the dialogs carried on through the blog that Franklin Einspruch set up, where everybody could get in their two cents’ worth—or that may have come after I went to Miami, over the Labor Day weekend in 1999.

I went to review a 12-year retrospective that Bannard was having in the Lowe Art Museum, at the University of Miami. At any rate, we had a pleasant lunch there. Consulting the appropriate back issue of FMD, I find that I voiced mixed emotions about the show, though I liked the most recent work best.

Along with the rest of the color-field painters, Bannard suffered neglect in New York in the 1990s and for the first few years of the new century. However, in 2007, Jacobson-Howard staged a show of his minimalist paintings from the early 60s, and Roberta Smith reviewed it favorably –if a bit perversely.

She suggested that these paintings were too minimal to please partisans of color-field, but not minimal enough to please minimalists. This apparent bridging of a dichotomy seems to have become Bannard’s ticket to ride, as since that time his “minimalist” paintings have enjoyed increasing fame, having been exhibited on numerous occasions by Berry-Campbell.

So – what of the recent work? One artist at the opening for whose talents I have the highest opinion said, “He’s really popping on the color!”

Another artist there whose art interests me less said she thought the work was “interesting.”

A talented out-of-towner who looked at the reproductions on the Berry Campbell website said he found them “worrying, fascinating, exciting, absurd even,” though he added he couldn’t really tell until he’d seen the paintings themselves.

Certainly, the proliferation of wildly dancing shapes and bright, lively colors makes this the most cheerful show I’ve seen in a long time.

While it throws the modernist playbook out the window, it also looks as though the artist had been having a wonderful time – losing himself in the very act of painting with a pleasure only heightened by the fact that it meant he could for a few moments at least forget about the sad state of his health.

Big curved shapes bounce as they are clearly outlined and piled upon each other (whatever happened to Greenbergian “flatness” or the painterly?).

Lines of color jump between areas of color, complemented by small superimposed opaque strips or trapezoids.

Pinks, yellows and a bright acid green predominate for the basic shapes. The pinks, especially when they appear in large, outlined ovals, remind me ever so slightly of Porky Pig, one of my favorite cartoon characters when I was a child.

Or maybe I should say Petunia Pig, Porky’s girlfriend, as these voluptuous pink areas also remind me of female flesh, as portrayed with sensuous skill by Rubens & Titian. I’ve heard it said that in his youth, Bannard was a bit of a womanizer. May we call this a remembrance of flings past?

Whatever you want to call it, the mood – anyway in the larger paintings nearer the entrance, can be frenetic, even frenzied – especially by comparison with the single big, dignified minimalist Bannard that hangs in the directors’ office, slightly to the left of the main show galleries to the right.

Yet, especially toward the back of the exhibition’s display space, the recent paintings get a bit smaller and the mood becomes a bit more serene – not least through the superposition of delicately sparse wisps of soft blue or calm brown gel, swept only partially over the brightness beneath as though applied with a huge brush.

Maybe the third best-painting in this show is “Sunda (13-5B) (2013), in the very back gallery. It has only a few simple oval forms in tans and browns, plus lively small accents of bright green, but it sings.

Right next to it is the second-best painting in the show. This is “Recamier (16-10A)” (2016). Relatively small and simple, with clearly defined swirling shapes and forms, it unequivocally enunciates the luxuriant themes that dominate the rest of the display--in radiant and luscious pink, sunny yellow and (unexpected but delicious) mustard.

Because "Recamier" so neatly epitomizes the broader range of the exhibition, I was going to use it for my illustration, but then I saw that Franklin Einspruch had already used it with his appreciation of Bannard in artcritical.com, so I'm going to give you my absolute favorite instead.

This is “The Windwards (13-18)," (2013). This medium-sized wonder hangs against the right hand wall halfway in the hallway going to the back of the gallery. In it, the hair-like gel strokes in deep blue and brown reach out over the center semi-circles of soft olive green, with accents of bright orange and red added--so that the whole seems to glow from within. Dynamite!

In addition to his paintings, Bannard currently also leaves behind a literary legacy that readers can access at two websites, thanks to two of his friends.

Some years ago, Bannard and John Link inaugurated www.newcrit.org , an online journal of “plain talk” that published a number of articles by distinguished contributors. Now John Link has added a title page with links to videotaped talks that Bannard gave on various occasions, so you can still hear his voice!

Another source for selections from Bannard’s writing (published and unpublished) is The Walter Darby Bannard Archives, compiled by Franklin Einspruch at www.wdbannard.org

Both undertakings will stay online for the foreseeable future.