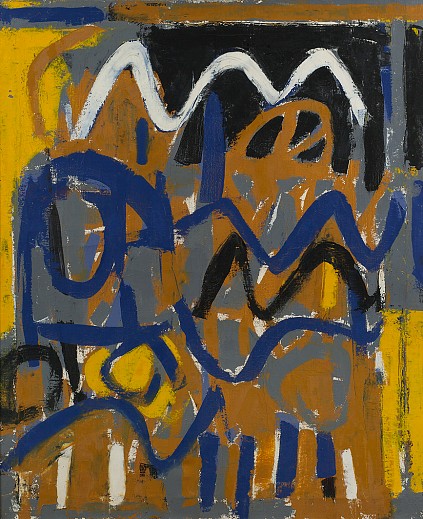 We’re starting downtown in Chelsea at Berry Campbell, whose latest show, Raymond Hendler: Swinging Heart, is set to open this Thursday. The show will display the abstract expressionist works of Raymond Hedler (American, 1923-1998) created between 1957 and 1964.The artist began his career in Paris as early as 1949, playing a key role in the Abstract Expressionist movement that took hold in both Paris and across the ocean in the avant-garde artistic circles of New York.

After his move to New York in 1951, Hendler’s social life can be called nothing short of extraordinary, befriending other major artists such as Franz Kline, Willem de Kooning and Jackson Pollock. He emerged himself in the growing Greenwich Village art scene and became an active member of the New York Artist’s Club and the famed New York School. Hendler’s friendship with one of its leading figures, Franz Kline, would significantly inform his later work, some of which is now on display in this exhibition. Vibrant colors and bold figures characterize this visually pleasing work. Kline remarked on Hendler’s work in 1962 saying “The direct austere design and color complexes paint the image without undue nuances- with clarity and mature independence.” Want to see what Kline meant? Head down to Berry Campbell to see the exhibition, which will be on display from March 20- April 26.