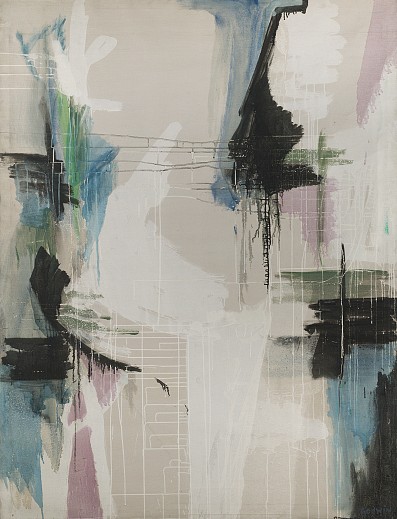 Recognition at last for the women of Abstract Expressionism

The role of female artists in the development of Abstract Expressionism has historically been underplayed and the consequent value of their work in the marketplace diminished. But women played a key role in the articulation of the movement: as early as 1942, Lee Krasner’s work was exhibited alongside that of Jackson Pollock, her future husband; Joan Mitchell, Perle Fine, and Mary Abbott were regularly invited to the members-only Eighth Street Club, founded in 1949 by Willem de Kooning, Ad Reinhardt and others; and Elaine de Kooning and Helen Frankenthaler (who later married Robert Motherwell) were included in the seminal ‘Ninth Street Exhibition’ alongside Krasner and Mitchell, organised by Leo Castelli in 1951. Women also participated in the museum shows of the day; Grace Hartigan took part in the 1956 MoMA exhibition ‘Twelve Americans’, which also featured paintings by Philip Guston and Franz Kline.

Eclipsed by their male counterparts in the later years of the 20th century, the last decade or so has seen another shift in perception. In 2002 a retrospective of Joan Mitchell’s work at the Whitney Museum of American Art, New York, established her critical status alongside Kline and de Kooning. More recently, in 2014 Helen Frankenthaler was celebrated in two museum shows (at Albright-Knox Art Gallery, Buffalo, New York, and Turner Contemporary, Margate). Significantly, the newly reopened and expanded San Francisco Museum of Modern Art has placed two large, exuberant and vigorous works by Krasner and Mitchell right at the front of its ‘Approaching American Abstraction’ display. Most recently, the groundbreaking exhibition ‘Women of Abstract Expressionism’, which has just closed at Denver Art Museum, brought together more than 50 works by 12 female artists associated with the movement, inviting focused attention on their often neglected contribution. These shows have given the market a decisive boost.

John Cheim of New York dealership Cheim & Read says that Mitchell is somewhat of an exception to this surge, with a collector base and a steady market well established over the years. ‘Joan has been recognised as a significant participant in the Abstract Expressionist movement since the 1950s,’ he says, ‘but the value of her paintings has risen dramatically in the last ten years. The auction record now stands at $11.9m for Untitled (1960) sold at Christie’s New York in 2014.’ Today, he notes that ‘top Mitchells sell for $5m–$15m’. There is a premium for works from the 1950s but ‘the work has value and market recognition through to the magnificent late paintings’, not just in the US, but also in France (where she lived from the mid 1950s), Germany, England, Korea, and Japan. ‘It took a while,’ says Samia Saouma of Galerie Max Hetzler. ‘As she said, laughing, in an interview in her late years: “They told me I would be more successful if I was a man, French, or dead.”’

Sotheby’s New York holds the auction record for Lee Krasner: $3.2m achieved in 2008 for Polar Stampede (1960). While nowhere near the $100m-plus a Pollock or Rothko might achieve, in 2015 the same auction house saw three works by Helen Frankenthaler breach $1m, including the bold Saturn Revisited (1964), which achieved the record $2.8m. In November that year at Christie’s New York, the earlier, lyrical and highly expressive Las Mayas of 1958 achieved $2.4m. Jason Ysenburg of Gagosian Gallery, which handles the Frankenthaler estate, says that while her market is predominantly American, ‘We are seeing over the last three years increasing numbers of interested clients in Europe and Asia’. John Berggruen of San Francisco’s Berggruen Gallery has shown Frankenthaler’s work since the early 1970s. He suggests that, as a second-generation Abstract Expressionist, her work, while strong and colourful, has less of the anguish found in first-generation paintings. ‘There is definitely a renewal of interest in her work, he adds. ‘Our market for private sales has been very strong.’

Mitchell, Krasner, and Frankenthaler are undoubtedly the three big guns at auction. As Leslie Prouty, senior vice president of the contemporary art department at Sotheby’s, explains: ‘Joan Mitchell started to move above $1m in 2004; she was at $4m by 2007. The masterpiece market of 2005, 2006, and 2007 helped boost the market in her work and Lee Krasner’s.’ Meanwhile, Frankenthaler’s recent high prices are owed in part, Prouty suggests, to current interest in Colour Field paintings, to which Frankenthaler made such a contribution, and partly to well-mounted exhibitions by Gagosian Gallery. Prouty points out that other female Abstract Expressionists who made auction records, albeit at a lower level, in the boom years before 2008, who do not enjoy the strong international gallery representation of these three, have not seen these prices sustained. She cites Mary Abbott ($28,125 in 2008 for Untitled); Perle Fine ($51,000 in 2006 for Hommage à Mondrian [1967–69]); and Judith Godwin ($31,200 in 2006 for Target [1979]). Exceptions are Grace Hartigan, who saw her strongest auction price in 2010 – $74,500 for the striking 1956 work Woman with Red Flower; and Jay DeFeo, whose beautiful, elusive, acrylic and mixed-media work on masonite Temple (for W.B.) from 1980, fetched a record $233,000 in 2013. Bonhams & Butterfield in San Francisco also recorded a good price in 2011 for this Bay Area artist – $218,000 for the intense work, Trial by Fire (1983).

Martha Campbell of New York-based Berry Campbell Gallery handles work by Perle Fine and Judith Godwin. ‘The market has grown considerably in the last ten years,’ she says. ‘Part of the reason is that prices for top-tier works by men have become out of reach for many collectors.’ Forced to dig beneath the surface, collectors have discovered ‘artists who painted works of outstanding quality’, but who ‘were marginalised due to inane factors like race, sex or geography’. Her clients largely seek works from the classic era – late 1940s to early 1960s – but others value works from the 1960s and 1970s. ‘Today it seems that the market is much less restrictive both in terms of gender and in art movements,’ says Campbell.

Tom McCormick is based in Chicago, and deals in work by Corinne Michelle West (who also used the name Michael West in an effort to overcome gender bias), Fine and Abbott. ‘I have sold Fine and Abbott extremely well for 15 years,’ he reports. ‘Last week I sold a Mary Abbott for $80,000 and another for $50,000.’ With work from the ‘sweet spot’ of the 1950s mostly already sold, he does well with Fine’s work from the 1940s, while Abbott – who turned 95 in July – is still painting. ‘There is a wide spectrum of people attracted to this work,’ he says, ‘and demand is kicking in just as supply is drying up, so it can’t help but go up in value.’ The Royal Academy of Arts’ current ‘Abstract Expressionism’ exhibition, will likely speed the process.