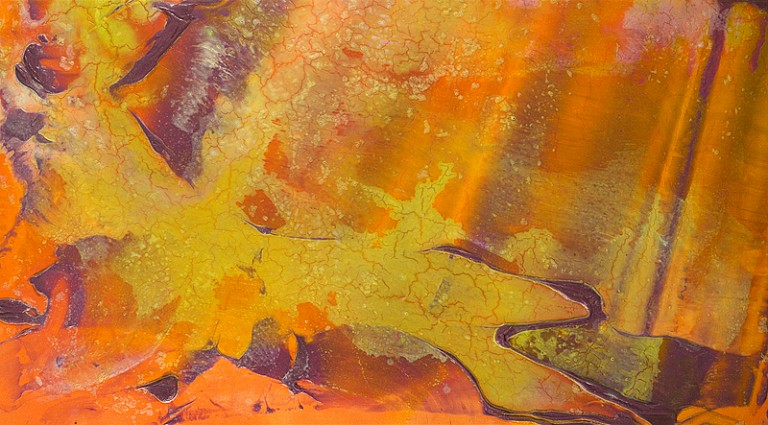 In the 1960s they called it “color-field painting” and after 1970, it was increasingly called “modernism,” by which time it attracted less attention.  But the artists kept at it. Now, to judge from four overlapping exhibitions of this later period, there may be fresh interest in what they did.  Following Larry Poons’s two recent exhibitions of early and recent painting (reviewed in these pages by Jill Nathanson) Bernard Jacobson unveiled “Helen Frankenthaler: Paintings” (through April 30). Most of the work is from the 1970s onward, climaxing with “Bella Donna” (1987). While Spanierman’s “Dan Christensen: Sprays and Stains” (March 6 through April 2) has one painting from the late ‘60s, most of the show is from the 1980s. Also opening on March 6 but up through April 19 is “Jules Olitski: Mitt Paintings” at Paul Kasmin. Created between 1989 and 1992, these paintings come from Olitski’s “baroque” period, and were made with the aid of heavy gloves normally used by house painters.  “Walter Darby Bannard: Dragon Water,” at Berry Campbell, is up through March 15.  Although Bannard was known in the early ‘60s for minimalist paintings, by the 1970s he had shifted to modernism, reveling in its succulent surfaces and offbeat colors.  This show is all from the 70s.  As is evident from “Pakistani,” he could convey a swinging, curtain-like motion with colors both radiant and restrained: mauve, purple, pale-to-vibrant orange and pale, almost citric lime-yellow. PIRI HALASZ