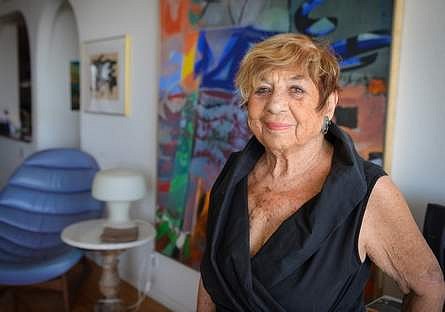 A Charmed Life in Sarasota with Art at the Fore

Sunday Profile
A charmed life in Sarasota, with art at the fore
By Carrie Seidman
Published: Saturday, July 2, 2016 at 7:50 p.m.

It was New Year’s Day of 1946 when Annie Solomon and her husband Syd, who had finished his service as a camoufleur — a specialist in the design and implementation of camouflage — in the war, arrived in Sarasota, where they intended to start their new life together. They’d met five years earlier, just after Pearl Harbor, at a distant cousin’s wedding when Annie, a graduate of Ohio State, was 21.

“We danced together and that was it,” she says, remembering the “larger than life” husband with whom she shared adventures for more than 60 years. She was the daughter of dress shop owners in Union Town, Pennsylvania; he was an aspiring artist, working in the Abstract Expressionist style. And Sarasota was… well, not what it is today.

“It was a very tiny and small and wonderful town,” says Annie Solomon, who recently celebrated her 98th birthday. “Syd would stop by the little dress shop where I worked downtown and we’d go off for a skinny dip in the Bay during lunch hour. We bought a little house near the Ringling school for $3,500 and we used to buy eggs for a penny a piece from the farm next door where they raised chickens. Our mortgage was $25.”

The Ringling Museum had just been given over to the state of Florida and the Solomons made friends with its first director, Everett “Chick” Austin, who quickly became “one of the reasons that kept us here.” Syd taught at the Ringling College of Art and Design and then as one of the first professors at the New College of Florida, while his body of work and his reputation grew. His painting, “The Silent World” — so named by the undersea explorer Jacques Cousteau, who said it reminded him of the world beneath the ocean’s surface — became the first by a contemporary artist to enter the Ringling’s collections.

Steadily, a stream of other artists, architects, writers and musicians joined their charmed circle, a virtual epicenter of the New York and Sarasota emerging art world that often gathered in the living room of the Philippi River home where, for 20 years, the couple spent their winters. The summer counterpart was their home in the East Hamptons of Long Island, where the Solomons and their friends wrote and put on plays, created 35mm films and sang the night away around a piano played by the likes of songwriters Jerry Lieber and Mike Stoller.

It was a time when expectations were different for the distaff half of a couple, Annie Solomon says. Though she tried her hand at painting, she quickly decided she was not very good and that “one artist was enough” in a marriage. She was Syd’s wife and helpmate — and that was plenty.

“Especially then, women were not so career minded,” she says. “But that doesn’t mean I didn’t work hard. He attracted wonderful painters here and we had lots of parties. Everyone came here and everyone always ended up at our house. For years, I fed everyone.”

The names she reels off are a who’s who of the Twentieth Century creative world: Artists Willem de Kooning, Mark Rothko, Phil Guston and Jim Dine. Songwriter Jerry Lieber. Writers Kurt Vonnegut and Saul Steinberg. Musician and filmmaker Larry Rivers. Screenwriter Jim Brooks. Gene Leedy, one of the founders of the Sarasota School of Architecture.

It was Leedy who designed the house and studio the Solomons would build at Midnight Pass on the south tip of Siesta Key, on a parcel of land they pieced together in three purchases to rescue it from development. Syd, an avid fisherman and boater, envisioned it becoming an artist colony and, with the help of architect Frank Folsom Smith, he and Annie hosted the first of many parties to come in the pre-stressed concrete structure on New Year’s Eve of 1970.

But erosion that threatened to close the pass endangered the property and became a contentious local issue. The couple spent a decade and a fortune trying to keep it open, constantly in and out of court battles and legal wranglings. About 1990, they finally gave up and sold the property.

“There was just no saving it,” Annie Solomon says. “And I think that is what started Syd on his slide. He was broken hearted. He just loved that house.”

The “slide” she refers to is her husband’s descent into Alzheimer’s. Even before the house changed hands, Annie had noticed her husband asking her the same questions repeatedly. Soon his “forgetfulness” became a near-total amnesia and the petite, stylish woman who had made the charismatics artist’s life run so smoothly for decades was hard pressed to cope. In the mid-‘'90s, she put him in a Sarasota care center, where he died a decade later.

“There’s no way to describe it,” she says of the tragic nature of the disease. “He ended up not knowing anyone, not me, not the grandchildren, nobody.”

But her light did not extinguish with her husband’s. Solomon continued to have parties, to gather friends, to feed everyone.

“What can you do?” she shrugs. “It’s either live or die. And I wasn’t about to die. I did everything I could to continue on.”

These days she is supporting the efforts of her son, Michael, also an artist, to revive interest in his father’s work, helping to put together a large book/catalogue that accompanies a traveling exhibition which opened in DeLand in April and will bring together the entire Solomon family clan for a reunion in South Carolina in August.

Annie Solomon hopes that her soulmate, several of whose works hang in her panoramic Bay-view Sarasota apartment, will be recognized anew as “a fabulous man and a great painter” who worked and played hard and loved a good challenge. And what about herself?

“I never thought about it,” she says. “I had a marvelous life and a lot of fun. Just as being a good friend, I guess.”