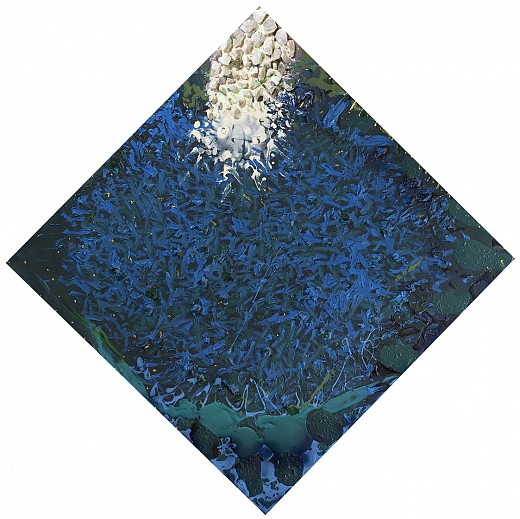 A fair number of people by this time must know that I greatly admire the mostly-mixed- media abstract paintings of Stanley Boxer.

Since I started posting at this website, I’ve discussed his work four times, most recently and at greatest length when he showed at Spanierman Modern in 2012.

Before then – around 2009, I believe – I dealt at even greater length in reviewing his retrospective that premiered in Richmond, Virginia and went on to tour in New England and Florida.

I am happy to report that his recent show at Berry Campbell (closed May 21) carried on his unique gifts with many more pleasures.

On the whole, I feel he did best – in this show, anyway – with muted colors, especially grays and browns. I also liked more of the paintings with matte surfaces, although occasionally one with a glossy surface appealed.

The gallery was wise to hang so many of these types of paintings facing the entry to the gallery and in its first alcove.

Right at the entry, I especially liked “Quarriedsigh” (1991), a tall narrow piece,  “Nighplay” (1994), a horizontal, and “Awinteringoarkdapple” (1993), a granular horizontal that completed this welcoming trio.

In the first alcove, I found two winners: “Enchantingcalm” (1995), with lots of gobs of matter, and “Devinecaprice”(1996), a fiery combo of reds and blacks.

Further back, I was very taken with “Nightandstone”(1996), reading from left to right like a sunset, and “Insularsaunteringsnowsatbay” (1979), one of the rare glossy pix that I liked.

And I was charmed by the display of ten little paintings at the very back of the gallery, all clustered around the only slightly-larger “Partingcuts” (1993), with its delicate skein of superimposed thread.