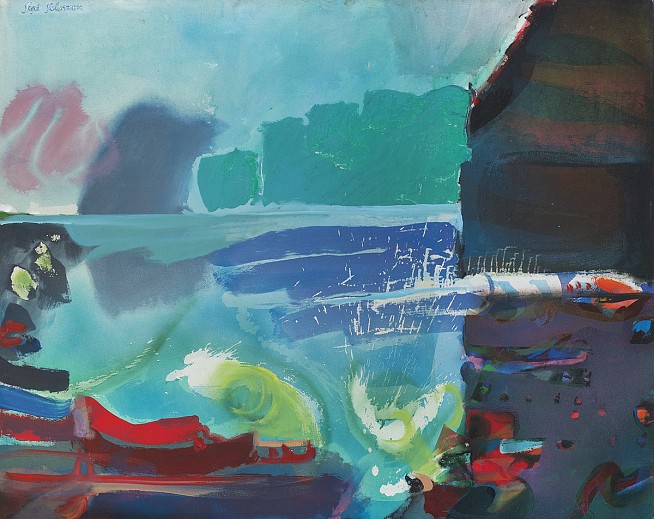 Those familiar with the Sarasota visual arts scene will immediately know the name of painter Syd Solomon, whose large-scale, colorful abstract works have drawn attention and collectors for decades. But they may not fully realize how Solomon’s work was influenced by his days as an aerial camoufluer in World War II. An exhibition opening April 29 at the Museum of Art in DeLand, Syd Solomon: Concealed and Revealed: Camouflage & Lettering in the Artist’s Work, aims to change that.

The show, which features more than 30 works dating from 1944 to 1992, includes historical materials from the late artist’s estate and a catalog with essays by Michael Auping, chief curator of the Modern Art Museum of Fort Worth; George Bolge, director of the Museum of Art in DeLand; and art historian and artist’s biographer Dr. Gail Levin.

As Solomon’s son, Michael, says in his notes on the exhibition, “Solomon’s work as a camoufluer in WWII was always acknowledged, but what was not understood before was how his particular expertise, as an aerial camoufluer, came to inform his later approach to painting. The orientation and perspective Solomon developed, from having to hide ground-based assets from the air, eventually morphed into his postwar paintings, through his development of masking and spraying techniques, which he employed at least as early as 1954, if not before. He once described using sprays as ‘dropping mists, like color bombs from above.’”

Michael Solomon adds that much less has also been known to the public before about Solomon’s skill in lettering. The artist worked during his early years doing both printed ads and signs, for hotels, stores, businesses, magazines and newspapers. “The examples of his lettering career found in the Solomon Archive help us unlock the ‘hand’ that is his work,” says Michael.

The Estate of Syd Solomon and the Berry Campbell Gallery have organized this exhibition, which runs through July 10 in DeLand and is also scheduled for the Greenville County Museum of Art in Greenville, S.C., Aug. 24 through Oct. 30. More venues are expected.