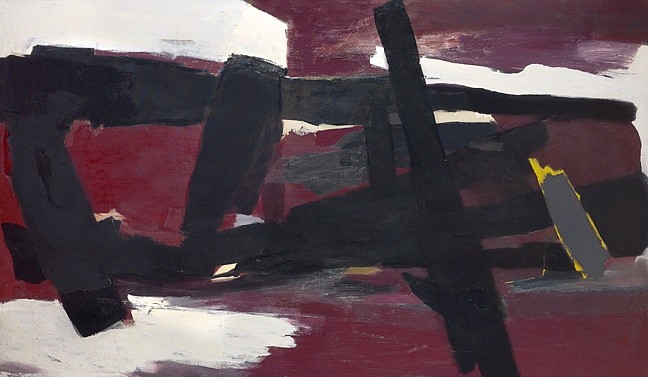 Female Artists Are (Finally) Getting Their Turn

Female Artists Are (Finally) Getting Their Turn
By HILARIE M. SHEETS
MARCH 29, 2016

At the peak of her career in 1976, Georgia O’Keeffe refused to lend her work to a pivotal exhibition in Los Angeles, “Women Artists: 1550 to 1950.” It was one of a wave of all-female shows — some 150 — that decade to spotlight artists largely ignored by major museums and galleries. But O’Keeffe, the most famous female artist of her day, saw herself in a different category — “one of the best painters,” period.

The feminist art historian Linda Nochlin borrowed an O’Keeffe painting elsewhere and put her in the show anyway. Yet despite these exhibitions, neither O’Keeffe nor any other woman would break into “Janson’s History of Art,” the leading textbook, until 1987, and equality remained elusive.

While some artists are ambivalent about being viewed through the lens of gender, the all-women’s group show, which fell out of favor in the ’80s and ’90s, is flourishing again. At least a dozen galleries and museums are featuring women-themed surveys, a surge curators and gallerists say is shining a light on neglected artists, resuscitating some careers and raising the commercial potential of others.

These shows are “playing catch-up after centuries of women’s marginality and invisibility,” said the artist Barbara Kruger, who has both declined and agreed to participate in all-women shows. Galleries looking for fresh names to promote and sell have more than altruism in mind: They are sensing opportunity “to cultivate a new market,” Ms. Kruger said.

The most prominent spring show is “Revolution in the Making: Abstract Sculpture by Women” at Hauser Wirth & Schimmel, the inaugural exhibition of the gallery’s new Los Angeles branch. It joins an all-women lineup at the Saatchi Gallery in London and at the Rubell Family Collection in Miami, where Mera Rubell, its co-founder, has seen a 20 percent spike in attendance over last year and enthusiasm from families bringing their daughters to see the show, “No Man’s Land.”

On the horizon are women-only group shows at the Minneapolis Institute of Art and Denver Art Museum, and corporate sponsors are starting to get into the act: The New Museum in New York was approached by the DKNY fashion house to underwrite its spring season, devoted to five solo exhibitions by women artists.

“They are curatorial correctives,” said Maura Reilly, the founding curator of the Sackler Center for Feminist Art at the Brooklyn Museum and now interim director of the National Academy Museum, who advocates for all-women exhibitions “to counterpoint the looked-overness.”

If these shows don’t close the gender divide, they at least provide substantial investment and rigorous scholarship to illuminate narratives that have slipped from the art historical record. The intergenerational lineup of 34 sculptors at Hauser Wirth & Schimmel includes younger artists like Kaari Upson and Shinique Smith alongside modernist forerunners like Louise Bourgeois, Claire Falkenstein, Eva Hesse and Lynda Benglis.

“These feminist artists broke down the hierarchies of what is considered acceptable in the world of sculpture, whether it’s the use of wire or cloth or yarns or foam or fiberglass,” said Paul Schimmel, the former chief curator of the Museum of Contemporary Art in Los Angeles, who organized the gallery’s show.

Mr. Schimmel argued that “the rising tide will raise the appreciation of all these artists across the board,” but acknowledged that “there is still a huge gap” between the prices for high market performers like Hesse and Bourgeois and the vast majority of women artists.

Of Hauser Wirth & Schimmel’s current gallery roster, 32 percent are women artists — not parity but closer to it than rivals like Pace (14 percent women), Gagosian (15 percent) and David Zwirner (28 percent), according to the galleries’ websites.

While a Bourgeois “Spider” bronze sold in November for slightly more than $28 million, with fees, the high price at auction for Claire Falkenstein, an innovator and contemporary of Bourgeois, is $158,500.

Three years ago the director of the New Museum, Lisa Phillips, received an email from a top collector asking why Ms. Sherman was so acclaimed. “Does she fill the vacuum and get more kudos because she is one of the only women that people can applaud?” the collector wrote. “Why do you think women artists aren’t better?” he asked. “They don’t fetch the prices.”

The idea that women artists couldn’t possibly be the equal of men because they don’t command the same money is part of a “deep cultural bias and persistent gender divide,” Ms. Phillips said. “This collector should be buying all these women artists that he’s questioning because they are undervalued by the market.”

Michelle Stuart, 83, whose earth-rubbed scrolls are featured in Hauser Wirth & Schimmel’s exhibition, said, “It’s really hard to get dealers to ask a lot for women’s work.” She is cynical about the lasting impact of group shows generally to change the landscape. “It can be an attention-getter for five minutes and then it’s back to business with all the guys again.”

Ms. Stuart echoed the concern of other artists that group shows create a one-and-done situation, easing the pressure to give women more prestigious solo exhibitions.

Ms. Stuart, whose work has sold for up to $500,000, recalled that early in her career, only two dealers would even meet with her. “One said, ‘I just can’t show a woman artist’ and the other chased me around in his shorts,” she said. “I closed up shop and didn’t even try for a long time.”

Jenni Sorkin, a feminist art historian and a curator of the Hauser, Wirth & Schimmel show, said that several sculptors “who are very public feminists” had turned down the curators’ overtures. “I think it has to do with an unsettled feeling that everything you’ve earned on your own could be undermined when you’re looked at through the prism of gender,” Ms. Sorkin said.

Now the chief curator at the Hammer Museum in Los Angeles, Connie Butler remembers a tough conversation with a British artist who spurned “WACK: Art and the Feminist Revolution,” a seminal show she and Ms. Sorkin organized at MoCA in Los Angeles in 2007.

“She said that she had made all this progress in her career and why would she want to slide back?” said Ms. Butler. She added, “What is so ironic is that numerous women from that exhibition are now at last finding their way to commercial galleries and having their retrospectives.” (Hoping to build on such successes, the Hammer next year will present “Radical Women: Latin American Art, 1960-1985.”)

Ann Philbin, the Hammer’s director, said that younger artists may have an easier time accepting the notion of women’s group shows than women who came up in the 1970s and even the ’80s. “It probably did feel a little bit like a ghettoization back then,” she said. She added that younger artists have seen the positive effect not only of women’s shows but of surveys of African-American artists, including the Hammer’s 2011 “Now Dig This!” from which the Museum of Modern Art acquired eight works after it traveled to MoMA PS1.

Ms. Smith, 45, whose paintings and large bound sculptures of braided clothing and bedding have sold for $40,000 to $150,000, didn’t hesitate to participate in the Hauser Wirth & Schimmel show. “As a woman of color, I have more trepidation when I’m asked to participate in a show of all African-American artists than all women,” she said, adding that she would bristle at being viewed solely by either categorization.

Pen and Brush, a 122-year-old nonprofit New York gallery that showcases only work by emerging female artists and writers, held a panel discussion recently on whether separation from male artists helps or hurts. “Our conclusion is that showing work by women exclusively is a way to get right at the heart of the stereotype that there’s just not enough good work by women,” said Janice Sands, the executive director of Pen and Brush. “People come into our gallery where there is no obvious indication that all the work is by women. They read the information cards. They’re surprised. They buy.”

Several female-only exhibitions remind viewers that women artists in earlier eras were participating in the intellectual scene. “O’Keeffe, Stettheimer, Torr, Zorach: Women Modernists in New York,” at the Norton Museum in West Palm Beach, Fla., highlights four women who knew each other and worked together, teasing out stories about why they were and were not successful.

At the New-York Historical Society, correspondence unearthed by researchers about Clara Driscoll (1861-1944), the director of the Women’s Glasscutting Department at Tiffany Studios at the turn of the 20th century, became the catalyst for the Center for the Study of Women’s History, which is to open early next year. “We made a discovery that a broad swath of our hallmark Tiffany lamp collection was in fact the work of women,” said Louise Mirrer, the society’s president and chief executive. “Lo and behold, New York was chockablock with women — talented, enterprising, successful — but their stories haven’t been told.”

The society is investing $31 million in the new center, with rotating exhibitions and redesigned Tiffany presentations, all located on the building’s fourth floor.

But will most visitors make it upstairs? “The question for me in doing these shows is whether we’re just preaching to the converted,” said Ms. Reilly, who strategically placed the Sackler Center at the Brooklyn Museum in a well-trafficked area.

Ms. Mirrer said that the New-York Historical Society was “setting up safeguards so this is not an optional visit for a museumgoer.” The new women’s center will be adjacent to the Tiffany display, a strong draw.

The historical exhibitions have revived careers, helping women artists take their place within the context of larger movements. To counter the “male-centric view of what Abstract Expressionism is,” Gwen Chanzit, the curator of modern art at the Denver Art Museum, said she discovered a cache of women artists who had exhibited in major shows during the 1950s. Starting on June 12, “Women of Abstract Expressionism” will spotlight virtual unknowns like Judith Godwin and Perle Fine, alongside the handful who broke through, including Joan Mitchell and Helen Frankenthaler. Ms. Chanzit’s research convinced the museum to acquire seven canvases in the show.

Ms. Godwin, 85, one of three living artists in the exhibition, said of the attention, “I never thought it was going to happen,” adding she had no qualms about being included in a “women’s show.”

“I had so many guys tell me in the ’50s that women just could not paint,” she said.

“I am a woman and I’ve always struggled in that capacity. I don’t want to deny it,” she said. “I’m honored to be in any show — especially a show of women.”

An article last Sunday about a resurgence of art exhibitions featuring work by only women included an outdated title for an exhibition planned at the Hammer Museum in Los Angeles next year. It is “Radical Women: Latin American Art, 1960-1985,” no longer “The Political Body: Radical Women in Latin America 1960-1985.”