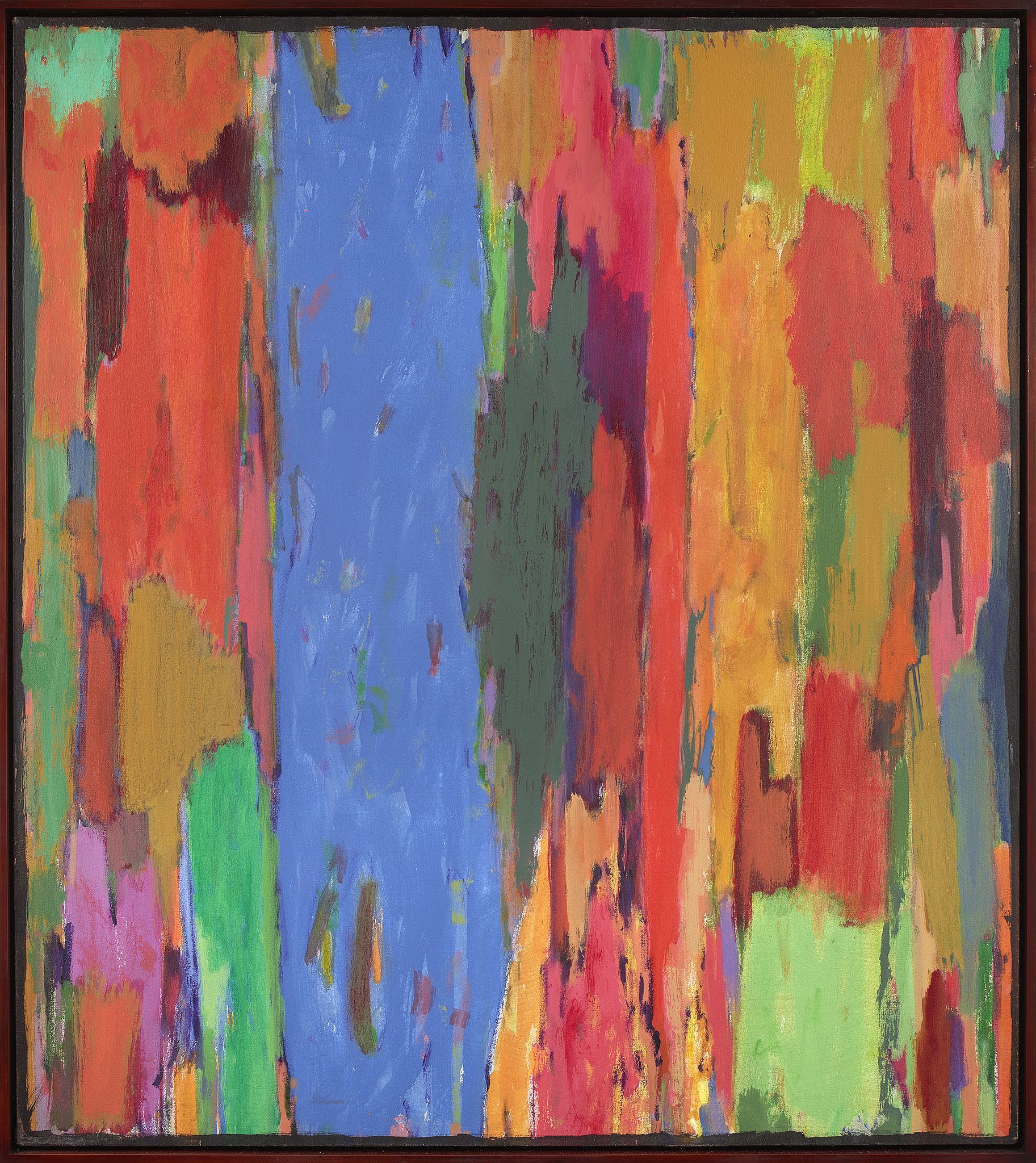 NEW YORK, NEW YORK, November 4, 2020—Berry Campbell Gallery is pleased to announce a finely curated exhibition of paintings from the 1980s by the renowned New York School painter, John Opper (1908-1994). Active as a painter for over six decades, Opper evolved from creating abstract gestural works, in which he drew inspiration from the natural world, to a pure form of abstraction. By the mid-1980s, Opper was building on and combining his earlier stylistic modes, creating works with a vibrating quality of controlled movement. Rich yellows, deep reds, bright greens, and sky blues challenge, but do not intrude on each other. Each color is composed of sophisticated tonal variations, not with the purpose of delineating foreground and background, but instead revealing a harmonious synthesis of otherworldly space. John Opper: Harmonies is on view at Berry Campbell in Chelsea from November 19, 2020 through December 23, 2020. The gallery is open with regular fall hours, Tuesday – Saturday, 10 am – 6 pm.

ABOUT THE ARTIST
Born in 1908 in Chicago, Opper moved with his family to Cleveland, Ohio, in 1916. In high school, he began studying art as well as taking a correspondence course in commercial art and attending classes at the Cleveland Museum of Art.[i] Inspired by the paintings he saw at the Cleveland Museum, including those by the Ashcan School painters George Bellows and Robert Henri, Opper abandoned the idea of becoming a commercial artist. After graduating from high school, he enrolled in the Cleveland School of Art (now Cleveland Institute of Art). The school at that time had a highly traditional curriculum, but Opper was pulled in a modern direction by a visit to the Pittsburgh International Exposition in 1928, where he saw the work of Picasso, Matisse, Braque, and other abstract painters for the first time. Dissatisfied with the Cleveland School of Art, Opper spent a year in Chicago, taking classes at the Art Institute of Chicago. He returned to Cleveland, where he studied at Western Reserve University (now Case Western Reserve), receiving his B.S. in 1931. By that time, the Depression had struck. Remaining in Cleveland, Opper taught afternoon and evening metalworking and sketching classes at the Karamu Settlement House, the oldest African American theater in the United States. In the 1920s into the 1930s, the House, which became known as the Playhouse Settlement, drew actors, dancers, artists, and printmakers.

Following his graduation from Western Reserve, Opper hoped to go to New York. This became possible in 1933.  However, having heard that Gloucester, Massachusetts, was “a nice spot to paint,” Opper went there first, residing in a fisherman’s house.[ii] In Gloucester, he showed his work to Hans Hofmann, who was teaching at the school run there by Ernest Thurn. Hofmann encouraged Opper to work “in a more modern vein and start finding what it’s all about.”[iii] Following this advice, Opper went from Gloucester to New York. There he and another artist from Cleveland, Edward Kaufman, started a mail-order club of American and British prints, which they mostly printed themselves, to distribute to schools and museums. With an office on Fifth Avenue, they made a portfolio of nine artists, including Louis Lozowick, Wanda Gag, and Karl Hofer. Shortly after moving to New York, Opper married his high-school sweetheart Estelle Hausman. By the mid-1930s, he had joined the WPA Easel Division. Opper credited the WPA experience with introducing him to new modern ideas. To advance further in this direction, he attended the 57th Street school Hofmann had established after leaving the Art Students League. Looking back at his time at the school, Opper felt that beyond Hofmann’s teaching, most advantageous was his contact with fellow artists, including Byron Browne, Rosalind Bengelsdorf, and George McNeil. At the time, he also met Giorgio Cavallon and the sculptor Wilfrid Zogbaum.

In 1936, Opper was a founding member of the American Abstract Artists, along with Balcomb and Gertrude Greene. The organization was formed to provide an opportunity for artists to show abstract works at a time when there were few other opportunities to do so. Opper had his first solo show in 1937. Held at the Artists’ Gallery in New York, it displayed a “colloquial flavor” and “imaginative color” as noted by a reviewer for Art News. The reviewer described the works on view as suggestive depictions of “East River tugboats, old garages, and scenes around Manhattan.”[iv] During his summer in Gloucester in 1933, Opper came to know Milton Avery.  Painting in Avery’s informal studio in New York City the following winter, he became acquainted with Adolph Gottlieb and Mark Rothko. Opper participated in a couple of shows during the 1930s of the American Artists Congress Against War and Fascism, whose president was Stuart Davis. About the same period, Opper joined the Artists’ Union and served as the business manager of its publication, Art Front. “With the WPA, you got together whether it was the [Artists’] Union or the [American Artists’] Congress or whether it was a bar…and you talked about art, and heard about important artists, and you began to live art.”[v]

During World War II, Opper worked for a ship design company, creating drawings for piping systems used for PT boats. In 1945, he left New York for a teaching job at Women’s College, University of North Carolina. He then taught at the University of Wyoming, followed by the University of Alabama, Tuscaloosa, before returning to New York in 1949, where he taught at Columbia University and completed his doctorate. In the evening, he taught at the Pratt Institute, in the company of several leading New York artists, including Franz Kline and Tony Smith. It was during his years away from New York that Opper began to create purely abstract works. He had been unable to do so earlier because he had been torn “between the needs of the society and the needs of war on the one hand, and . . . what I felt were the aesthetic needs of painting.”[vi]  However, he gradually came to believe that what is essential to art “is that which changes . . . the language and the substance of it.”[vii] With a wife and two children, Opper again left the city between 1952 and 1957, when he returned the University of North Carolina at Greensboro. Despite his absence from New York City, Opper made frequent trips back, never failing to gather with friends such as Kline, Philip Guston, Grace Hartigan, and Willem de Kooning at the Cedar Bar. In 1955, Opper had a solo exhibition of abstract works at Egan Gallery in New York. In a review in Art News, Parker Tyler referred to Opper as a “substantial member of the New York School” who had exploited “its fusion of free rhythms and hieroglyphics with Cubism’s standard analysis of space and object.”[viii] By the summer of 1957, Opper was back in New York City, where he joined the faculty of New York University, remaining until he retired in 1974 as professor emeritus. Opper found a large studio in a former YMCA building on the Bowery. He partitioned off the third-floor space into two studios and offered the second space to James Brooks. When Rothko received the Four Seasons commission, Opper suggested he use the empty gym, which he did. When Opper had a heart attack in 1966, he moved one floor down to minimize the flights of stairs rather than give up his studio, which he kept until he died. The illness also made him switch permanently from oil to acrylic paint.

In 1962 Opper bought a house in Amagansett, Long Island, and began construction on a studio.   From then on, he painted in both Amagansett and the Bowery studios. Starting in 1988, he spent the winter months in Sarasota, Florida, where he established another studio. Throughout his long career, Opper showed with several well-known New York galleries. In 1959, Eleanor Ward invited him to the Stable Gallery. He left the gallery in 1962, following the advent of Pop Art. Starting in the mid-1960s, Opper was represented by the Grace Borgenicht Gallery. He continued to paint until his death from a heart attack in New York City in 1994.

ABOUT BERRY CAMPBELL GALLERY
Christine Berry and Martha Campbell have many parallels in their backgrounds and interests. Both studied art history in college, began their careers in the museum world, and later worked together at a major gallery in midtown Manhattan. Most importantly, however, Berry and Campbell share a curatorial vision.

Both art dealers have developed a strong emphasis on research and networking with artists and scholars. They decided to work together, opening Berry Campbell Gallery in 2013 in the heart of New York's Chelsea art district, at 530 West 24th Street on the ground floor. In 2015, the gallery expanded, doubling its size with an additional 2,000 square feet of exhibition space.

Highlighting a selection of postwar and contemporary artists, the gallery fulfills an important gap in the art world, revealing a depth within American modernism that is just beginning to be understood, encompassing the many artists who were left behind due to race, gender, or geography-beyond such legendary figures as Pollock and de Kooning. Since its inception, the gallery has been especially instrumental in giving women artists long overdue consideration, an effort that museums have only just begun to take up, such as in the 2016 traveling exhibition, Women of Abstract Expressionism, curated by University of Denver professor Gwen F. Chanzit. This show featured work by Perle Fine and Judith Godwin, both represented by Berry Campbell, along with that of Helen Frankenthaler, Lee Krasner, and Joan Mitchell. In 2019, Berry Campbell's exhibition, Yvonne Thomas: Windows and Variations (Paintings 1963 - 1965) was reviewed by Roberta Smith for the New York Times, in which Smith wrote that Thomas, "... kept her hand in, adding a fresh directness of touch, and the results give her a place in the still-emerging saga of postwar American abstraction."

In addition to Perle Fine, Judith Godwin, and Yvonne Thomas, artists whose work is represented by the gallery include Edward Avedisian, Walter Darby Bannard, Stanley Boxer, Dan Christensen, Eric Dever, John Goodyear, Ken Greenleaf, Raymond Hendler, Ida Kohlmeyer, Jill Nathanson, John Opper, Stephen Pace, Charlotte Park, William Perehudoff, Ann Purcell, Mike Solomon, Syd Solomon, Albert Stadler, Susan Vecsey, James Walsh, Joyce Weinstein, Frank Wimberley, Larry Zox, and Edward Zutrau. The gallery has helped promote many of these artists' careers in museum shows including that of Bannard at the Institute of Contemporary Art, Miami (2018-19); Syd Solomon, in a traveling museum show which culminates at the John and Mable Ringling Museum in Sarasota and has been extended through 2021; Stephen Pace at The McCutchan Art Center/Pace Galleries at the University of Southern Indiana (2018) and at the Provincetown Art Association and Museum (2019); Vecsey and Mike Solomon at the Greenville County Museum of Art, South Carolina (2017 and 2019, respectively); and Eric Dever at the Suffolk Community College, Riverhead, New York (2020). In an April 3, 2020 New York Times review of Berry Campbell's exhibition of Ida Kohlmeyer's Cloistered paintings, Roberta Smith stated: “These paintings stunningly sum up a moment when Minimalism was giving way to or being complicated by something more emotionally challenging and implicitly feminine and feminist. They could hang in any museum.”

Berry Campbell is located in the heart of the Chelsea Art District at 530 West 24th Street, Ground Floor, New York, NY 10011. For further information, contact us at 212.924.2178, info@berrycampbell.com or www.berrycampbell.com.