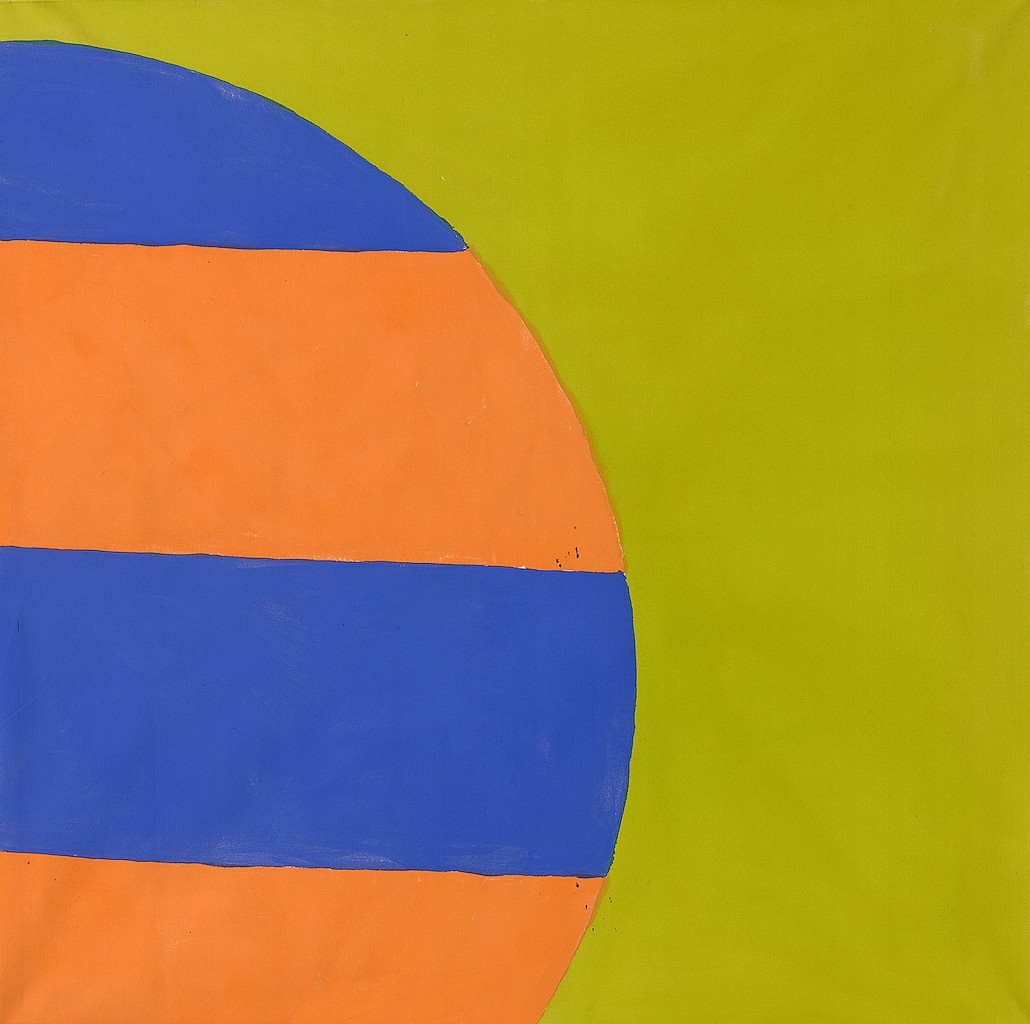 NEW YORK, NEW YORK, JUNE 22, 2020—Berry Campbell Gallery is pleased to announce Edward Avedisian: Reverberations, a special exhibition of paintings by renowned Color Field artist, Edward Avedisian (1936-2007). This exhibition is focused on Avedisian’s paintings from the mid-1960s. The works from this era were created with new exuberant patterns of movement through color contrasts and buoyant relationships of figure and ground.  Along with his contemporaries, including Jules Olitski, Kenneth Noland, Walter Darby Bannard, Dan Christensen, Frank Stella, and Larry Poons, Avedisian was instrumental in the exploration of new abstract methods to explore the primacy of optical experience, breaking from the tactility of Abstract Expressionism. He was included in the landmark exhibitions, Op Art: The Responsive Eye, organized by the Museum of Modern Art in 1965, and Expo 67, held in Montreal. He showed at the prestigious Hansa (1958-59) and Elkon (1960-75) galleries and participated in four annuals at the Whitney Museum of American Art. His works were prominently featured in Artforum (including the magazine’s cover in January 1969), Artnews, and Arts magazines. Currently on view through October at the Museum of Modern Art is The Shape of Shape, curated by artist, Amy Sillman. This exhibition is drawn from the museum’s permanent collection, highlighting works that have rarely been on view. Sillman chose Edward Avedisian’s painting, The World Has Gone Surfing, 1963, originally gifted to the museum by Andy Warhol. Edward Avedisian: Reverberations opens at Berry Campbell’s Chelsea location September 10, 2020 and will continue through October 10, 2020.

ABOUT THE ARTIST—An artist who mixed the hot colors of Pop Art with the cool, more analytical qualities of Color Field painting, Edward Avedisian was among the leading figures to emerge in the New York art world of the 1960s.  Avedisian was born in Lowell, Massachusetts, and attended the School of the Museum of Fine Arts, Boston.  His first exhibition was in 1957, at the Boylston Print Center Gallery, Cambridge, Massachusetts.  After moving to New York City about that time, he joined the dynamic art scene in Greenwich Village, frequenting the Cedar Tavern on Tenth Street, associating with the critic Clement Greenberg, and joining a new generation of abstract artists who were exploring the limits and possibilities of art by experimenting with new techniques and ways of organizing pictorial space. In 1958, he was the last new member invited to join the Hansa Gallery, under the direction of Richard Bellamy and Ivan Karp. Begun in 1952, Hansa had been the site of Allan Kaprow’s “Happenings”; its members included Robert Beauchamp, Paul Georges, Wolf Kahn, Jan Müller, George Segal, and Richard Stankiewicz. Avedisian’s first and only show at Hansa took place in March of 1958—the gallery closed the following year.  By 1962, Avedisian was represented by the Elkon Gallery.  In his first show at Elkon that year, he exhibited stained canvases with central images consisting of three plumes arranged against a large blot.  A critic for Arts magazine noted the way the paintings explored issues relating to the picture plane that were successful in being “effective and controlled.”[1]  By 1963, Avedisian had transitioned to a hard-edge approach, portraying primarily large striped circles that were placed in, and turned in, different directions within the picture plane, creating challenging eye movements for the viewer.  Brian O’Dougherty noted the shift in Avedisian’s work in the New York Times, stating that his “targets woo the eye . . . in a sort of shooting match of afterimages.”  To O’Dougherty, Avedisian’s work represented the emergence of a “definite school,” of which he noted:  “the time seems ripe for a group show intelligently examining what is definitely a new and exciting trend.”[2]

In 1963, Avedisian was included in his first Whitney Museum annual, and two years later, the new direction in art was given recognition by the Museum of Modern Art in its exhibition, Op Art: The Responsive Eye.  Avedisian was among the artists included in the show that curator William Seitz stated consisted of works that “exist less as objects to be examined than as generators of perceptual responses in the eye and mind of the viewer.”[3]  Critic John Canaday observed that the exhibition presented art that left behind the “sloppiness” that had previously marked avant-garde in favor of “art forms that demand technical perfection as an integral part of expression.”[4]  Avedisian was also represented in the Whitney Museum’s Young America 1965 and the aforementioned Expo 67.

In the late 1960s, Avedisian enlarged the scale of his canvases and began to use a verticalized emphasis in paintings consisting of overlapping, irregular swaths of rich color.  One critic noted of these images in 1970 that they were “beautifully and lyrically executed paintings that created a busy arena for the eye.”[5] In 1970, a solo show of his work was organized by the Bucknell University Art Gallery, Lewisburg, Pennsylvania. In 1971, Avedisian was included along with Bannard, Christensen, Davis, Poons, and Peter Young in the exhibition, Six Painters, organized by the Albright-Knox Art Gallery in collaboration with the Baltimore Museum of Art and the Milwaukee Art Museum.  The show, which traveled to the three museums, was accompanied by a ­­­catalogue including an essay by Albright-Knox curator James N. Wood, who wrote that the selection for the exhibition consisted of the “highest quality work of younger, abstract painters.”[6]

In the mid-1970s, Avedisian abruptly left New York City and moved upstate to Hudson, New York, cutting his ties with the Manhattan art scene.  He also broke out in new directions in his work, painting representational scenes from his immediate environment, such as men at work, billboards, and couples in repose. Some of his art of the time expressed homoerotic themes, while others captured the beauty of the natural landscapes in which he found respite. One critic described the art of his late career as having a disarming directness and a furtive sense of narrative. The last show of his lifetime was held at the Algus Gallery in 2003.

ABOUT BERRY CAMPBELL GALLERY—Christine Berry and Martha Campbell have many parallels in their backgrounds and interests. Both studied art history in college, began their careers in the museum world, and later worked together at a major gallery in midtown Manhattan. Most importantly, however, Berry and Campbell share a curatorial vision.

Both art dealers have developed a strong emphasis on research and networking with artists and scholars. They decided to work together, opening Berry Campbell Gallery in 2013 in the heart of New York's Chelsea art district, at 530 West 24th Street on the ground floor. In 2015, the gallery expanded, doubling its size with an additional 2,000 square feet of exhibition space.

Highlighting a selection of postwar and contemporary artists, the gallery fulfills an important gap in the art world, revealing a depth within American modernism that is just beginning to be understood, encompassing the many artists who were left behind due to race, gender, or geography-beyond such legendary figures as Pollock and de Kooning. Since its inception, the gallery has been especially instrumental in giving women artists long overdue consideration, an effort that museums have only just begun to take up, such as in the 2016 traveling exhibition, Women of Abstract Expressionism, curated by University of Denver professor Gwen F. Chanzit. This show featured work by Perle Fine and Judith Godwin, both represented by Berry Campbell, along with that of Helen Frankenthaler, Lee Krasner, and Joan Mitchell. In 2019, Berry Campbell's exhibition, Yvonne Thomas: Windows and Variations (Paintings 1963 - 1965) was reviewed by Roberta Smith for the New York Times, in which Smith wrote that Thomas, "... kept her hand in, adding a fresh directness of touch, and the results give her a place in the still-emerging saga of postwar American abstraction."

In addition to Perle Fine, Judith Godwin, and Yvonne Thomas, artists whose work is represented by the gallery include Edward Avedisian, Walter Darby Bannard, Stanley Boxer, Dan Christensen, Eric Dever, John Goodyear, Ken Greenleaf, Raymond Hendler, Ida Kohlmeyer, Jill Nathanson, John Opper, Stephen Pace, Charlotte Park, William Perehudoff, Ann Purcell, Mike Solomon, Syd Solomon, Albert Stadler, Susan Vecsey, James Walsh, Joyce Weinstein, Frank Wimberley, Larry Zox, and Edward Zutrau. The gallery has helped promote many of these artists' careers in museum shows including that of Bannard at the Institute of Contemporary Art, Miami (2018-19); Syd Solomon, in a traveling museum show which culminates at the John and Mable Ringling Museum in Sarasota and has been extended through 2021; Stephen Pace at The McCutchan Art Center/Pace Galleries at the University of Southern Indiana (2018) and at the Provincetown Art Association and Museum (2019); Vecsey and Mike Solomon at the Greenville County Museum of Art, South Carolina (2017 and 2019, respectively); and Eric Dever at the Suffolk Community College, Riverhead, New York (2020). In an April 3, 2020 New York Times review of Berry Campbell's exhibition of Ida Kohlmeyer's Cloistered paintings, Roberta Smith stated: “These paintings stunningly sum up a moment when Minimalism was giving way to or being complicated by something more emotionally challenging and implicitly feminine and feminist. They could hang in any museum.”

Berry Campbell is located in the heart of the Chelsea Art District at 530 West 24th Street, Ground Floor, New York, NY 10011. For further information, contact us at 212.924.2178, info@berrycampbell.com or www.berrycampbell.com.